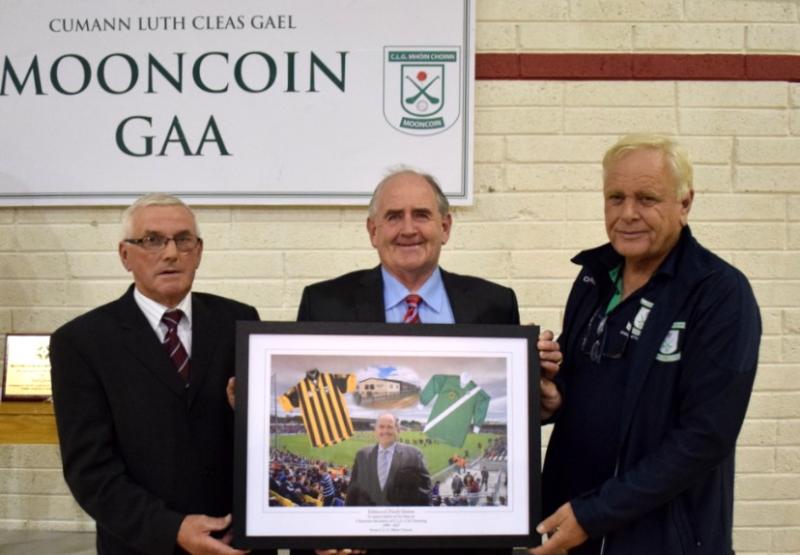 Ned Quinn was made a presentation by Mooncoin chairman, Jimmy Holden and club officer, Joe Dunphy

One of the most famous sons from the parish was honoured on the day progressive South Kilkenny outfit, Mooncoin, officially opened the latest stage of the club development.
Ned Quinn, former club and County Board chairman and currently Kilkenny’s representative on the GAA Central Council, was honoured by famous Mooncoin for his distinguished service to the parish and beyond.
“All teams need great leaders, and Ned Quinn was one of the best,” insisted Mooncoin club chairman, Jimmy Holden, when paying tribute.
Mr Holden made the official presentation of a framed picture which captured Mr Quinn’s involvement with club and county on behalf of Mooncoin GAA in the company of friends and former colleagues from the various areas of the organisation Mr Quinn served.
The surprise presentation was sprung on Mr Quinn when he attended to perform the official opening of the new €130,000 astro turf playing area.
Every story starts somewhere. Ned’s father, William, played at minor and senior level with the club and later he became chairman. The young Ned was destined to follow.
“Ned Quinn played at all under-age levels for Mooncoin, and won under-16 and minor championship medals,” the chairman recalled. “A year after the latter he played in the 1965 Harty Cup final with De la Salle, Waterford against Limerick CBS.”
Among his team mates were Tom Grant from Mooncoin and former Leinster Council hurling officer, Brendan O’Sullivan, Thomastown, Mr Holden recalled.
The chairman tracked Mr Quinn’s career down through the years. At adult club level Ned donned the famous colours and played senior hurling and football with Mooncoin.
He was elected club secretary in 1976 and served two terms. He became chairman in 1986 and served until 1989. He won the club chairman of the year award in 1989.
Ned Quinn managed under-age teams at all levels, and he was elected chairman of Kilkenny Cumann na Bunscoil in 1980. His election meant he was the first non teacher or religious person to be appointed to the chair.
In 1981 he was a selector with the Kilkenny All-Ireland winning minor team. He then became chair of the South Divisional Board (1992 to 1994); then vice-chairman of Kilkenny Co. Board (1995 to 1998).
He was elected chairman of Kilkenny Co Board 1999 and served until 2007. He also served as chairman of the National Hurling Development Committee from 2007 to 2009.
“In 2007 he was elected secretary of the Kilkenny GAA Co. Board, thus becoming the first man ever to be elected to the position of chairman and secretary of the ‘Board,” Mr Holden recalled with pride. “He served again as chairman in Kilkenny from 2013 to 2017.”
In 2018 Ned Quinn was appointed chair of the National CCCC in Croke Park. Ned remains on with Kilkenny Co. Board and is a member of the Management and Finance Committees. He also serves on the Board of Directors of Croke Park Stadium.
“In his 19 years with Kilkenny, the county contested 43 All-Ireland finals, winning 25, eleven of them at senior level,” Mr Holden told the audience. “Numerous Leinster, National Leagues and Walsh Cup titles were also won during this period.”
Mr Quinn was also involved in the setting up of the Development Squads in Kilkenny, thus keeping the flow of young hurlers moving through the system on to the senior ranks.
Ned Quinn immersed himself in the re-development of Nowlan Park. He helped organise 10 major concerts featuring top international acts.
“The ’Park is a credit to Ned, the County Board and county,” the Mooncoin chairman insisted.
“Then came the development of the Dunmore training facility,” the chairman continued. “Ned, helped in no small way by Pat Henderson, drove on this project.”
In 2007 former Taoiseach, the late Garrett Fitzgerald, presented Ned with an Honorary Masters degree from Maynooth University in recognition of his contribution to hurling.
In 2009 he was awarded the GAA presidential medal by the then President, Nickey Brennan. In 2011 he was nominated for the Kilkenny Rehab person of the year award.
In 2012 Ned Quinn received the President’s Business award at the Kilkenny Chamber of Commerce annual awards night.
The chairman admitted that wasn’t the entire list of achievements, but it gave a fair idea of the kind of high achiever Ned Quinn was, and continues to be.
“The first words I know Ned will say to all of the above is ‘he had a great team around him’ all the time,” the chairman said. “True, but all teams need great leaders, and Ned Quinn was a great leader.”
The chairman said Mr Quinn was blessed to have a family who backed him in everything he did; his wife Lucy; son Billy and daughters Emer and Orla.

“Then came the day he thought he would never see; the pride when he saw Mooncoin walk out on Croke Park,” he concluded. “We all watched with pride and enjoyed the journey with him.”
Tributes was also paid by County Board chairman, Jimmy Walsh, who described Ned Quinn as a man who inspired all around him to great things.
Incidentally, around €1.5 million has been spent developing the Mooncoin complex which now includes two sand based pitches, the main one which is flood lit using a generator, a stand that can accommodate 300 people, four dressing-rooms, and illuminated walk way around both pitches.
Additional indoor facilities include a full working gym which has over 300 members, badminton and indoor soccer facilities in a spacious hall that can accommodate up to 1,000 people.
Thanks to a huge community effort, the outstanding debt is only around €150,000.