The Shamrocks set lofty goals for every game 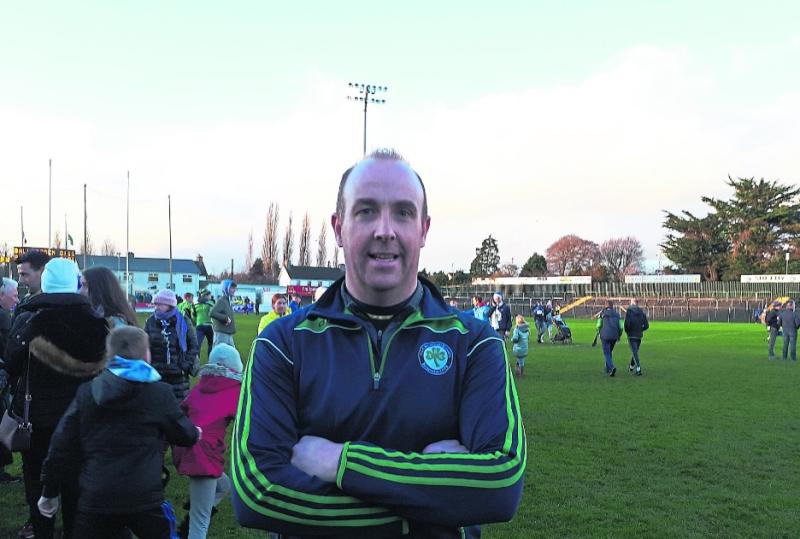 Kilkenny and newly crowned Leinster champions, Ballyhale Shamrocks could never be accused of being easy on themselves.
Believe it or not, their target score per game is at least 20 points. Yes, 20 points!
So team selector and Kilkenny under-21 mentor of last season, Richie O’Neill revealed after Sunday’s thrashing of Ballyboden St Enda’s (Dublin) in the Leinster club senior final.
“That was a strong performance,” O’Neill opened when asked to sum up Sunday’s super showing. “We have to be happy. We always target 20 points per game. We got 21 today.
“After the last two games we concentrated on not conceding goals. We set ourselves targets and goals every day we go out.
“Obviously the first one is to win the match, but there are small things along the way we focus on and the lads got it all right. They put in a savage performance. We are delighted.”
Hold on there, we suggested, 20 points is a lofty target, especially so at this time of year?
Richie smiled: “When you have lads of the calibre we have, you have to set high targets. T.J. (Reid) and Colin (Fennelly) lead it up the middle, but Adrian (Mullen), the Eoins’ (Reid and Cody) and Brian Cody are super lads around them.
“That is just what we have been doing all year. We set ourselves a target of 20 points per game.”
For the record, in their last three games Shamrocks hit 20 (county final), 21 (v Naomh Eanna) and 21 (v Ballyboden) points.
Fiercely driven
And after conceding six goals (2 v Bennettsbridge and 4 v Naomh Eanna) they hit the other target of a clean sheet on Sunday.
The squad seems to be fiercely driven, we suggested?
“The hunger is unreal,” said the Kilmacow clubman and former Kilkenny goalie. “This is my first year with the club and I can’t get over the love, enthusiasm and passion that is there for hurling.
“It is a parish with around 400 houses and everyone is involved in the hurling; everyone wants to be down in the field.
Win every match
“They love it so much. They just want to win every match they play. It is brilliant for me as an outsider to come in and see it. I can’t get over it.
“I have seen passion in my own club, but this seems to be at a deeper level in that every household is connected to the club and game. The amount of brothers on the team and families connected with it makes it that way.”
He revealed fellow selector, Tommy Shefflin reminded the players during the week that it was 40 years since Shamrocks won their first senior and first Leinster titles (1978). The players of today had a tradition to uphold.
“A lot of the family names involved then reappear on this panel,” Richie continued. “That is something the club and community in Ballyhale is very proud of.”
The first half was a real contest between apparent equals, but then Shamrocks took off. Explain?
“I felt we were dominant in a lot of positions during the game,” Richie offered. “In the first half our execution wasn’t good. After 20 minutes it was eight wides to zero.
“So while the match was level enough, we couldn’t be happy with our use of the ball.
“There was a strong cross field wind, and some of our shot selections weren’t good. In the second half the concentration was on getting the ball into the full-forward line, and the lads then did the damage.
No magic
“There was no magic to it. It was just get out and work hard and be more direct and more decisive in our execution.”
Shamrocks, Richie admitted, hadn’t even thought about the All-Ireland series.
“It is early December,” he smiled again. “We will take a bit of a breather and think about it.
“We haven’t even thought about that, but it is excellent to have it there. It will shorten the Winter. We will enjoy the Christmas and then we will focus on February.
“This is a learning experience for me, learning how these people think, finding out things about them. The game seems to be blood deep with them.
“There is never a problem, with the field or anything. We were training the other night and we couldn’t get them off the field.
“We only wanted to do 20 minutes, but we couldn’t get them off the field. Obviously from the likes of Tommy Shefflin and Henry (Shefflin) you learn a lot, and the real Shamrocks passion is there with Patrick Phelan as well.”
He reminded that the younger players have to turn around this weekend and go again in the under-21 championship.
“They will have tonight and tomorrow night off, but then the concentration will on the next match,” he said. “That is what they do, what they enjoy.”
Shamrocks play Dunnamaggin in the Roinn A under-21 hurling semi-final in Danesfort on Sunday (1pm).