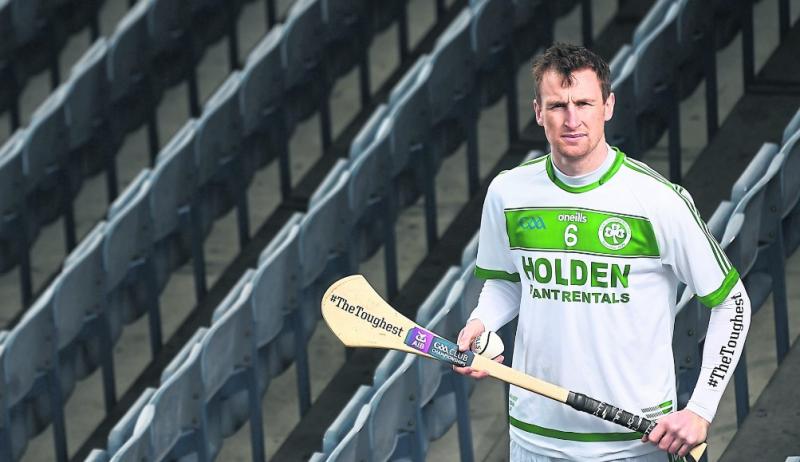 Former Kilkenny All-Ireland winning captain, Joey Holden is a tech graphics and maths teacher in Kilkenny City Vocational School.
He studied for his degree in tech graphics and engineering at the University of Limerick and added maths to his bow in the last two years, doing an online part-time course because he loves maths.
The school is right beside the Kilkenny hurling nursery of St Kieran’s College. Joey lives at home in Ballyhale and his best friend on the team would be his long-time schoolmate and Kilkenny senior teammate, Colin Fennelly.

Ballyhale Shamrocks play St Thomas (Galway) in the All-Ireland club senior hurling final in Croke Park on Sunday (2pm).
Ballyhale are the record AIB All-Ireland club SHC champions, with six titles and you’re personally going for your third, so is it still exciting or does the novelty wear off?
JH: “No! It’s great. You still get excited about it. We’ve been there a couple of times, but each time is totally unique.
“If you get there once it’s a dream and to get there twice was unbelievable so we can’t wait for the day. There’d be nerves and excitement, a mixture of all those things.”
What do you remember of the 2010 victory against Portumna?
JH: “I was fairly young, only 18, and just came on for 10 minutes. It was unreal. You’re just thrown in! I remember it being very fast and not getting to touch the ball for ages, but I got on one ball anyway and knocked over one and that was my claim to fame! It probably is an adventure when you’re that young.”
The 2010 win put Ballyhale ahead on the All-Ireland charts with five titles? Was that a big milestone for you as players?
JH: “No, honestly. Players wouldn’t be conscious of stuff like that because every club All-Ireland you get into is special and you just want to win it. Those sorts of stats are for looking back on when you’re finished and probably for the older people in the parish.
“You just want to do your best on the day in an All-Ireland final.”
What are your memories of the 2015 victory over Kilmallock?
JH: “I was more established on the team then, so I had a bigger responsibility, but you just have to take it in your stride. You’re training every day to get ready for those days.
“We did a lot of hard work beforehand and watched Kilmallock on a video and they were flying, so we knew we’d be up against it if we gave them any leeway. In the match they were driving in balls that were just a little too long for them and we managed to clear them. We got on top and kept on top.”
What’s been Ballyhale’s toughest game this season?
JH: “We had a fair few. We were really pushed in the county semi-final against Castlecomer, a savage tough game. We’ve had that slice of luck along the way; a vital goal against ’Comer kinda looped in rather than got driven into the net. Every team probably gets it, but we like to think we work hard and earn our luck.”
Ballygunner in the semi-final, which was such a Kilkenny/Waterford derby, was another one?
JH: “The day was also a real tough one. The conditions probably brought the scoring down a small bit, but it was still really tough.
“It wasn’t the classic game of free-flowing hurling. You don’t like those games every day, but they’re the games where lads show a bit of grit and heart and character. Patrick’s Day is always a lottery weather-wise, so you have to be ready for anything.”
You played with Henry Shefflin. He was your teammate for so long and now he’s suddenly managing you. What’s that like?
JH: “It’s been seamless enough. Henry is Henry. He’s very dedicated and strong-minded and knows clearly what he wants to do.
“That’s what he did on the field himself and he’s brought that with him into management. It’s probably more difficult for him than us really.
“We’re still going out hurling, but Henry’s now observing and seeing what’s going right or wrong but that’s what he has to do, he has to make that separation.”

Who are the team’s unsung heroes?
JH: “Bob Aylward. He never hurled for the county, but has been a stalwart for us for years. He’s 41 now and his son Dylan is also in the squad. He’s seen the club down in intermediate and winning All-Irelands.
“That man’s mentality and drive is something else.
“There’s loads of unsung heroes in the background as well, the people who cut the grass or train the young lads .
“That takes real dedication.”