Kilkenny big guns to face off in McCalmont Cup shoot-out

Second round draw pairs Thomastown United A with Freebooters A 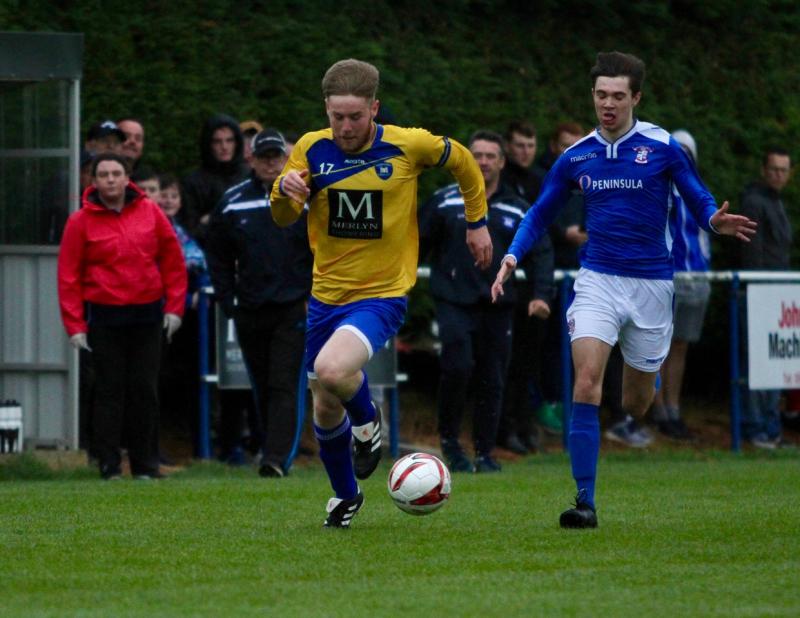 Nathan Sherry (Thomastown United) in action against Joe Banville (Freebooters). The sides will meet again in the McCalmont Cup

One of the big guns in the Kilkenny & District League’s Premier Division will NOT be in the hunt for this season’s McCalmont Cup race for much longer.

The draw for second round of Kilkenny’s blue riband competition was made on Saturday and pitted Thomastown United A against Freebooters A.

The sides, who have played some tense games lately, provided the pick of the second round ties. United got the nod when the teams met in a make-or-break Premier Division game last season. Dessie Walsh, Mark Delahunty and Mick O’Neill grabbed the goals in a 3-0 win that saw Thomastown end Booters’ title hopes and force a play-off with eventual champions Evergreen A.

However, Freebooters gained their revenge when the sides met in the league this season. United seemed to be heading back to the top of the table when Andy Kavanagh fired them ahead on the Fair Green in January, but a David Grincell brace saw the city side take all three points.

Elsewhere Premier Division table-toppers Highview Athletic A have a home draw against Tullaroan to look forward to, while the Highview B team are away to top flight side Fort Rangers. Defending champions Evergreen A are away to promotion-chasing East End United from Division Two, while Newpark A await the winners of the Deen Celtic A v Bridge United A clash.

Newpark A v Deen Celtic A or Bridge United A

Thomastown United A v Freebooters A