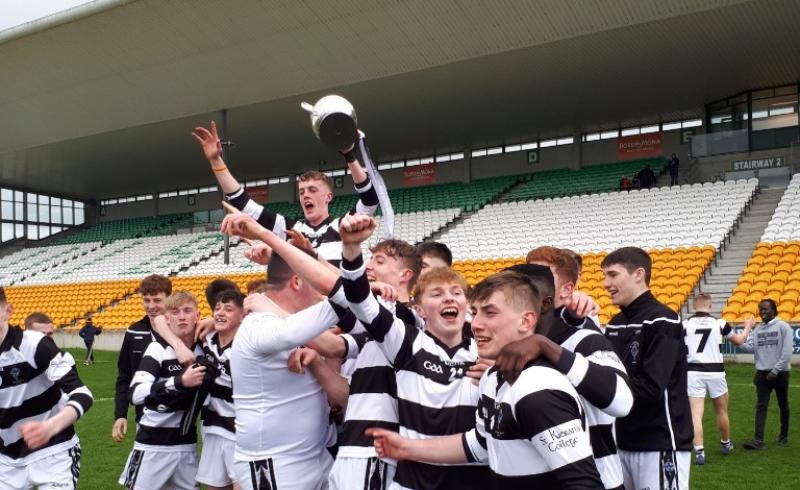 Defending champions, St Kieran’s College, are the kings of colleges hurling again and they extended their lead at the top of the Roll of Honour when beating the Presentation College, Athenry in a hard fought final in Tullamore today.

St Kieran’s took over the last quarter and out-scored the opposition by 1-4 to 0-1 to land what was their 23rd title.

When top scorer, Mark Kennedy and TJ Brennan put points together to leave the Presentation 1-10 to 0-11 clear heading into the last quarter the title looked there for the taking.

St Kieran’s simply played away, turning small gains into a big advantage that saw them drive on and retain the Croke Cup.

David Blanchfield started the comeback when he pointed. The next score was a goal from No. 17 Conor Kelly. The O'Loughlin Gaels man finished the ball to the net from close range from a clutch of players after attack leader, Eoin Cody, launched the raid.

Wing-back Killian Egan and Blanchfield again pointed to complete a short but remarkable turnaround as St Kieran’s now led by 1-14 to 1-10 with time almost up. There was no surrender this time once the Kilkenny side were in front.

Neither side gave much ground during a close and tight marking opening half. The scores were level six times and the only goal chance came when Eoin Cody crashed a shot from close range on the right against the far upright at the road end in the 18th minute.

The Presentation opened with two nice points from the lively Mark Kennedy, but when Cody replied with a brace for Kieran’s it was nip-and-tuck all the way.

The teams went step for step after that, but when Aaron Brennan lofted over a beautiful point for Kieran’s in the 30th minute it looked like they would carry the advantage into the break.

They didn’t. A well taken injury-time score from TJ Brennan levelled, leaving it 0-7 each at half-time.

Early in the new half the winners worked their way into a 0-10 to 0-7 lead, but after Kennedy crashed home a great goal for the Presentation in the 39th minute (1-8 to 0-10) they lifted their game. Subsequently they got into a winning position, but determined St Kieran’s weren’t prepared to settle for second best.