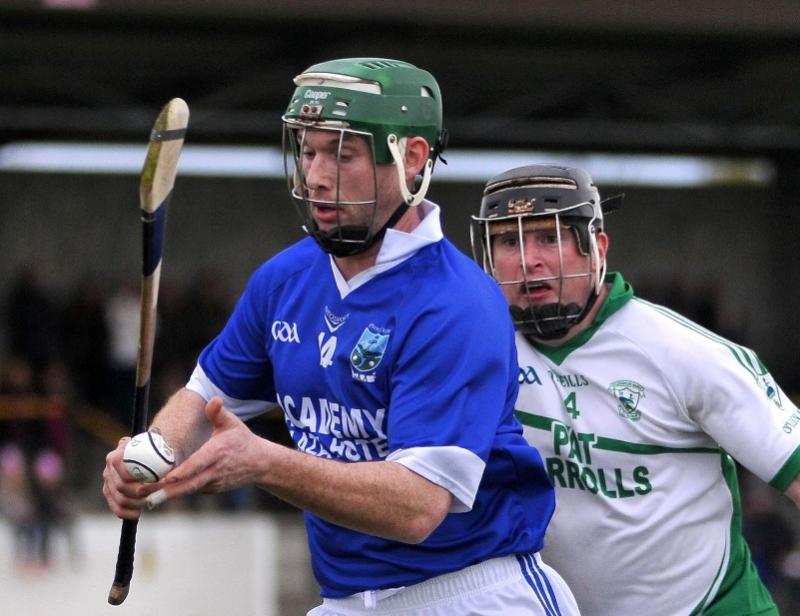 Sturdy attacker, Michael Murphy, helped himself to the fine total of 11 points as he inspired Erin’s Own (Castlecomer) to a battling win over St Patrick’s (Ballyragget) in the Kilkenny senior hurling league in Freshford this evening.

The early exchanges were even and the teams shared equally in four points during the opening minutes. When St Pat’s jumped nicely in front with a well taken goal by Joe Brennan on 12 minutes (1-4 to 0-2) they were hurling well, very well in fact.

However, ’Comer stood firm and hit back for a hat-trick of points from the lively Shane Feehan and Murphy at the double to get right back in the hunt although playing against the fresh breeze.

At half-time St Patrick’s showed 1-7 to 0-8 in front, but that situation changed within 90 seconds of the restart.

After Erin’s Own full-forward, Robert Moran robbed the ball off a defender, he set-up James Mullins for a close range goal to put the winners in front. They roared on. Two points from Murphy followed, and the boost in the Erin’s Own confidence could almost be felt in the stand and on the terraces.

With Murphy, Conor Fogarty, Cathal Holland and Shane Feehan all flying, Erin’s Own looked good, but St Pat’s kept chasing and chasing. Pat’s second score of the half didn’t come until the 43rd minute, but it was a big one, an inspiring goal from Jack Morrissey with a ferocious shot that almost burst a hole in the net.

That mighty effort brought the game back to 1-12 to 2-8. Again Murphy answered the call for Erin’s Own, weighing in with a brace of points.

A third from sub James Holohan extended the gap to four and from there the winners defended with a ferocity that simply locked out the opposition as they claimed their second league victory.