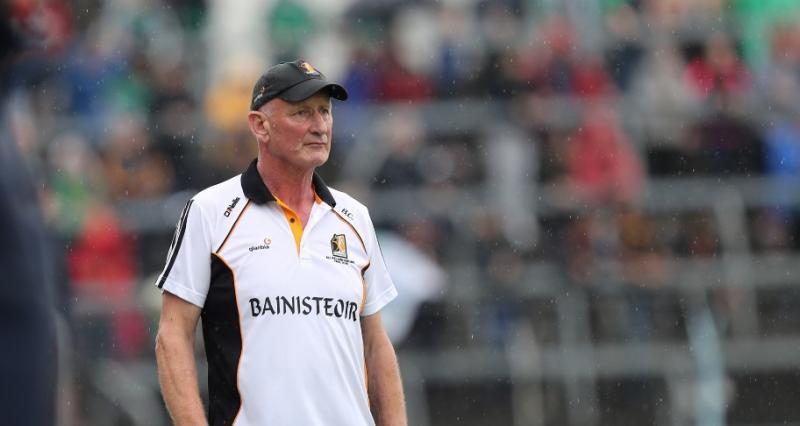 Double hurling champions, Limerick, are shaping their own path to success and are not copying Kilkenny or anyone else from the past, Noreside boss Brian Cody has insisted.

There had been suggestions in the media over the past few months or so that the Shannonsiders, the current power in the game, had taken on ‘Kilkenny ways’ in their drive for success, but the James Stephens clubman rubbished the suggestion.

“Not at all,” was the response from the 11 times All-Ireland winning boss when asked did he think Limerick were set up to look like Kilkenny of the past. “Why would they want to replicate anything from anyone else?

“It depends on the players you have. They dictate how you play. You can try and impose different things on different players. The way Limerick play is outstanding.

“They don’t have to take anything from anyone because they have talent, a top class management team, terrific attitude on the field. They just go and play their game.

“I wouldn’t consider for one second that they have taken anything from anybody, and certainly not from us.”

The Kilkenny manager was speaking during a press conference to preview Saturday’s All-Ireland senior hurling championship semi-final between the counties in Croke Park (6pm), a game in which the defending MacCarthy Cup holders, Limerick will be favourites.

“Generally there have been no great expectations surrounding Kilkenny this year, apart from ourselves,” Cody said of a situation that saw Kilkenny quoted at 11-1 at one stage to win the All-Ireland. “We don’t talk about what our ambitions are. Every team has their own ambitions. But as regard expectations from the media, the wider public, we weren’t mentioned in the list of contenders.”

Does that make things all sweeter now that Kilkenny are in the semi-finals?

“No, no,” he insisted. “It is not a question of doing it for a particular reason, that someone else might have an opinion. It is a question like with all sports people, they go out to win for themselves and the people involved with them.

“You can talk about other stuff all you like, but at the end of the day it is how you apply and think yourself that will decide things.”

What asked what worries or concerns him most about Limerick, he was easy and relaxed.

“Worry doesn’t come into it,” he insisted. “There is no point in worrying. Let’s be very clear about Limerick. I said from the start of the year that they are an outstanding team, the best in the country. As All-Ireland champions they are entitled to that respect.

“They then won the League, which further enhanced what they have done. Then there was the Munster final. Their performance there was exceptional.

“I am not sitting here just to build them up and take the pressure off us. I was asked what I thought of them. I think they are excellent.”

Limerick gave Kilkenny a bit of a beating (2-18 to 0-15) when the counties clashed in the National League earlier in the season, but Cody insisted that game would have no bearing on Saturday’s match.

“We weren’t competitive enough at all,” he said of that clash. “To be fair, I remember that up to 25 or 30 minutes that day there was very little in it. During the closing five minutes of the first half they hit us for two goals. We weren’t able to get back.

“They were the better team. That period of the game was crucial. They have forwards who are very adaptable. Aaron Gillane is one, but all their forwards are good. They have the ability to hit you like that.

“I would say we learned a lot since. That was a long, long time ago. That game has no relevance to Saturday.”

He said the All-Ireland semi-final was a huge game, offering a big, big prize. He was satisfied Kilkenny were well over the disappointment of losing the Leinster final and being beaten by Galway in the championship too.

He felt Kilkenny were playing better than last year, when they lost to Limerick in the quarter-finals.

“That was last year. That is totally irrelevant now,” he said when asked would happenings in that contest influence things this time. “Everything changes. Were weren’t in the semi-final last year.

“Limerick went on to great things after beating us last year. That is where things are now.”

In their last two matches, Kilkenny faced very different styles of play against Wexford in the Leinster final and then Cork in the All-Ireland quarter-final. Limerick would be different again, so what was the thinking?

“Maybe everyone has a different style, but the game is hurling,” he opened. “You take on the challenge and the game will take a certain style and shape and you have to be able to adapt to whatever is in front of you. Obviously everyone wants to impose their own game on the opposition.

“That won’t happen all the time. You have to be able to deal with what the opposition throw at you. At the same time you have to try and play your own game. People talk an awful lot about how the game is played, tactics and so on, but it is still hurling.

Kilkenny shot 29 scores (2-27) against Cork, so improving on that against class champions will take some doing.

“That was decent. We were happy with that,” he said of the tally against the Leesiders. “The aim  will be to try and score more than them. The aim is to play as well as you can to enable yourself to do that.

“The game will take on a life of its own in lots of ways. We will go into the game and try and impose our way, as will Limerick.”

During the past three years Cody was a spectator at the All-Ireland finals, and while he enjoyed the games, he didn’t feel any regrets that his charges weren’t involved.

“It wasn’t tough,” he said when asked to describe what it felt like being a spectator, seeing that he was involved in 15 since he took over as boss on the Noreside. “They were great occasions, great days. If we were good enough to be out there we would have been out there.

“We weren’t good enough. They were all great occasions. We didn’t earn the right to be out there. Now we have another chance to do it and we intend to make the best of it.”