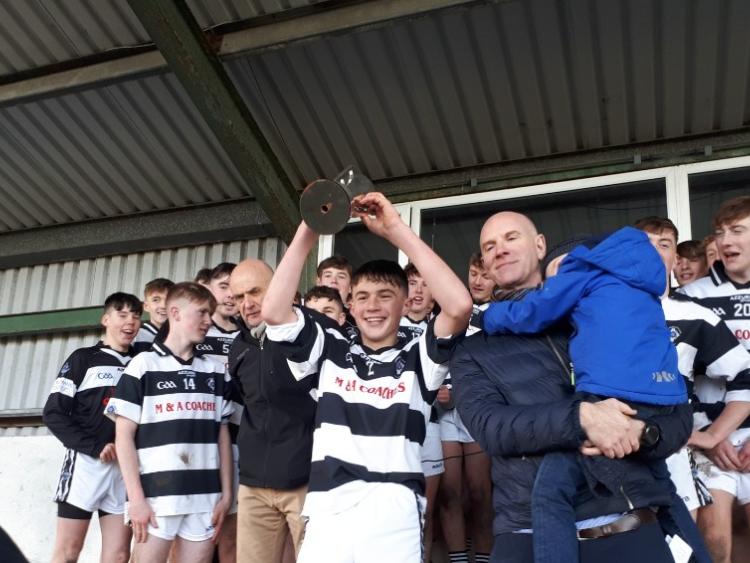 St Kieran’s College have won many a good game in the past, but today they had to drive deep into the red zone to come up with a dramatic winner in this Titanic and thrill a minute All-Ireland Post Primary Schools junior hurling final in cold and wind swept Banagher.

In the end an 80th minute point from a free by Harry Shine, following a foul on one of the star performers, Dara Mason, upended gritty defending champions, Presentation College, Athenry.

Nearly three minutes of time added on were played at the end of extra-time and wind assisted Presentation piled on the pressure in a bid to save the day. However, heroics by the St Kieran’s defence and men like central defenders, Joe Fitzpatrick and Adam O’Connor, made sure Noreside captain, Paddy Langton was the one who got his hands on the cup.

The Presentation were a fair team. They opened against the wind and within two minutes star attacker, Gavin Lee drilled a rocked like shot to the net.

St Kieran’s were under serious pressure for a while, but eventually they got on top around their own ‘40’, and with Killian Carey and Naoise Dempsey going well up front they made serious gains.

The gap went up to five points during the third quarter, but the Presentation kept chasing. When Padraig Lennon pointed for Kieran’s in the 48th minute they were 1-14 to 1-8 ahead, but they didn’t registered again in regular time.

Athentry really picked up the pace when Shaun Gilligan, Lee and Matthew Tarpey put three scores together in quick succession heading into the closing seven minutes. They caught up at 1-14 each just before the end of normal time, which was the score at the end of the hour.

During the first half of extra time Athenry enjoyed slightly the better of things, but St Kieran’s cut their losses with a late point from Shine (1-17 to 1-16).

The winners bridged the gap subsequently with a minor from Nick Doheny. There was an exchange of scores subsequently before Shine won the match and title with a late free.