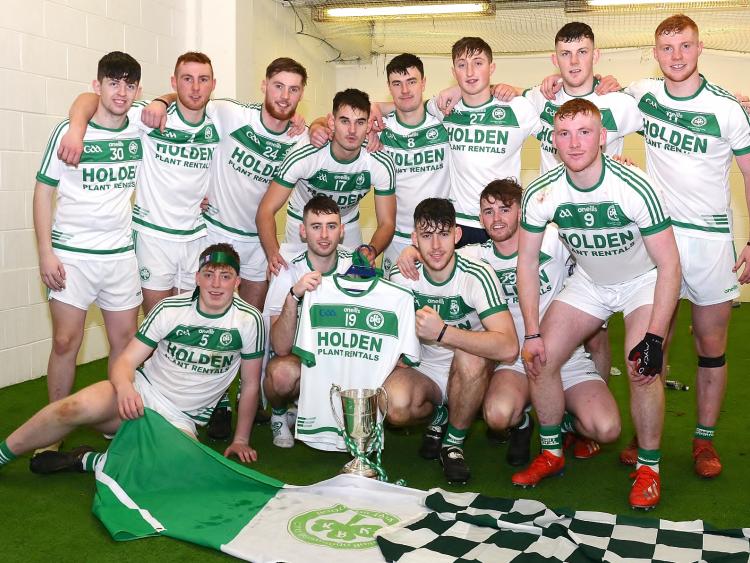 Shamrocks players pictured with Eugene Aylwards jersey after the final

Putting victories together, no matter what level is it, proves the true worth of any squad and for that reason alone Shamrocks much decorated manager, Henry Shefflin, was thrilled with Sunday’s senior club All-Ireland win over Borris-Ileigh (Tipperary).
This was Shamrocks eighth victory and first successful defence of the Tommy Moore Cup.
“To win this one was the goal,” Shefflin said straight up. “To put wins back-to-back is something we’ve never done.
“We didn’t speak about it until we got close to the match, but we wanted to do it. We really wanted it, because I think it’s a great sign of any team. To do back-to-back you have to have serious desire and want.”
He insisted that for Shamrocks and the community of Ballyhale, the day was joyous and yet very sad.
“Eugene Aylward’s passing last year gave the players the want and desire,” he continued.
Something special
“They wanted to do something special and have that jersey with them. We had a photo inside last year of Eoin’s (Doyle) jersey. Eugene’s jersey, number 19, wasn’t seen all year, but it was inside with us in the dressing-room
“We got a picture with that jersey and the Cup and I think that’s a great reflection of what the lads wanted to achieve today.”
The 10-time All-Ireland medal winner, popularly known as 'King Henry', insisted Shamrocks learned big time from the semi-final win over Slaughtneil (Derry), in particular how to deal with the sweeper system.
“We learned from that,” the former attacker assured.
“In training last Thursday night and last Sunday, we trained for that. We had a bit of work done on that, and I was glad we did.”
Darren Mullen came into his own and cleaned up when Shamrocks countered the opposition’s use of a sweeper. Why?
“Because he is a fabulous hurler,” Shefflin replied.
Shamrocks, he felt, were finding the gears in the first half and third quarter, but they just didn’t get the goal that would drive them on.
“I thought if we scored a goal we might kick on,” he suggested. “The one thing I was afraid of in the lead-up to the match was that Borris-Ileigh have serious momentum behind them.
“They started to get that coming to the end of the second half, but then TJ (Reid) stands up and away we go again. When we really needed him in the last five or six minutes, he came through for us.”
Shefflin revealed that when Shamrocks hand out the jerseys they start with number six, number three, number 11 and number 14 first.
“That is because we say these are our leaders lads, and ye just follow these lads,” he revealed. “That’s what we have. We have that spine there. We're very fortunate to have that spine.”
Greatest of all
And former Hurler of the Year Michael Fennelly, who collected his fifth All-Ireland winners medal on Sunday, is possibly the greatest leader of all.
“I thought this time last year that it was his last day, to be honest,” Shefflin said of his commanding centre-back.
“When he got a serious knee injury he was off for four months. I was in contact with him and he was humming and hawing, so I knew there was a glimmer of hope.
“I think he’s minding himself very well. The word has been used before – he’s a warrior. He just keeps in there.
“That long 37-inch hurley swinging over someone’s shoulder to get the flick or a touch in and just the physical strength of the man and the way he’s managed himself with the double jobbing in Offaly and dealing with Johnny Kelly as well is amazing.
“In the last couple of weeks it’s been noticeable, his focus and his performance against Slaughtneil was a little bit off and he wanted to put it right. I thought he was a brilliant rock in the centre of defence today.”
And the young bucks starred too. Corner-back Darragh Corcoran, in particular, was showered with praise by the manager.
“This time last year he was 18 years of age and he didn’t get any championship action,” Shefflin recalled. “He’s really developed. That’s what I’m mindful of the whole time.
“Inter-county is different. You’ve probably 35 top-quality players that are busting a gut to get on a team and are probably very good hurlers and have the opportunity to get a run at a county team.
“I’ve lads who aren’t going to take TJ’s jersey or Michael’s jersey, but they keep coming and coming and coming. That’s what you need – a panel of players.
“ I was delighted when we were playing the Byrne Cup without the county players. Darragh Corcoran was one of the players who stood up for us and he got his opportunity and finished the year strongly.
“That’s what you’re looking for. That’s what you need,” he said.