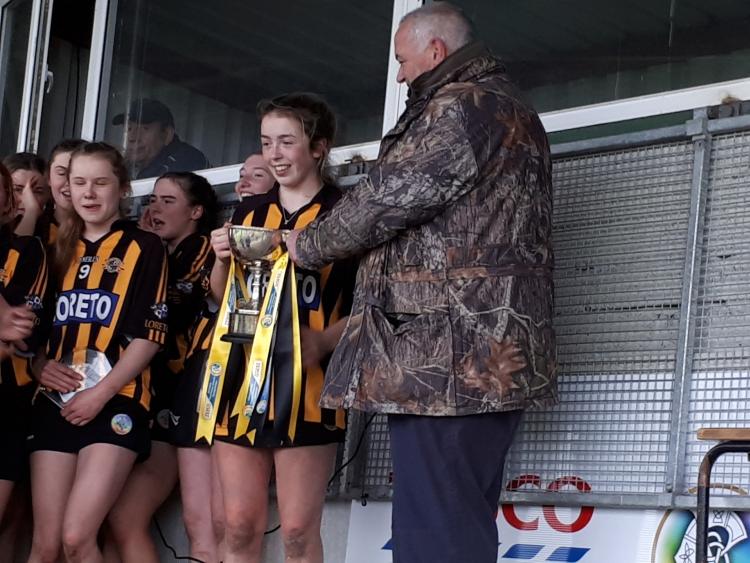 Loreto captain, Emma Manogue is presented with the winners trophy

Two weeks ago the seniors won their seventh title thanks to a last minute goal in Banagher. This time the juniors snatched the winning goal in the 63rd minute when star attacker, Caoimhe Keher-Murtagh, found the net for the third time to beat excellent opponents Presentation College, Athenry.

This was a tremendous contest that produced top class camogie. Heading into the last quarter star Athenry player, Sabina Rabbitte, pointed a free to leave her side 2-10 to 2-5 in front when battling like demons when playing against the strong wind.

The Loreto hadn’t enjoyed much joy during that quarter, adding a mere two points to their interval tally. However, when Keher Murtagh crossed from the left for flying midfielder, Asha McHardy to shoot a Kilkenny goal in the 46th minute it was game on big time again, 2-10 to 3-5.

The Presentation, thanks to scores from Aisling Cronelly and Olwen Rabbitte, stayed in front until back-to-back minors from Caoimhe Keher Murtagh and the powerful Claire Doheny, following a terrific defence splitting run by McHardy, levelled it at 2-12 to 3-9 in the 57th minute.

Momentum was with the Loreto by this stage. When Ava Shefflin drilled a ball into the danger area deep in injury time, corner-forward Keher Murtagh snatched it from the air before winning a metre of space and shooting the winning goal.

It was some finish to a game that rocked with exciting action from the start. The Presentation scored a goal in their first attack in the opening minute, Olwen Rabbitte taking the honours to finish a fine move launched by Megan Gannon.

The winners had two goals from Keher-Murtagh during this half, and they didn’t look too badly placed when 2-3 to 2-7 behind at the break. However, the losers put in a ferocious effort during the next quarter to extend their advantage slightly, but the Loreto kept going and going and they got there in a sizzling finish to claim their 10th title.