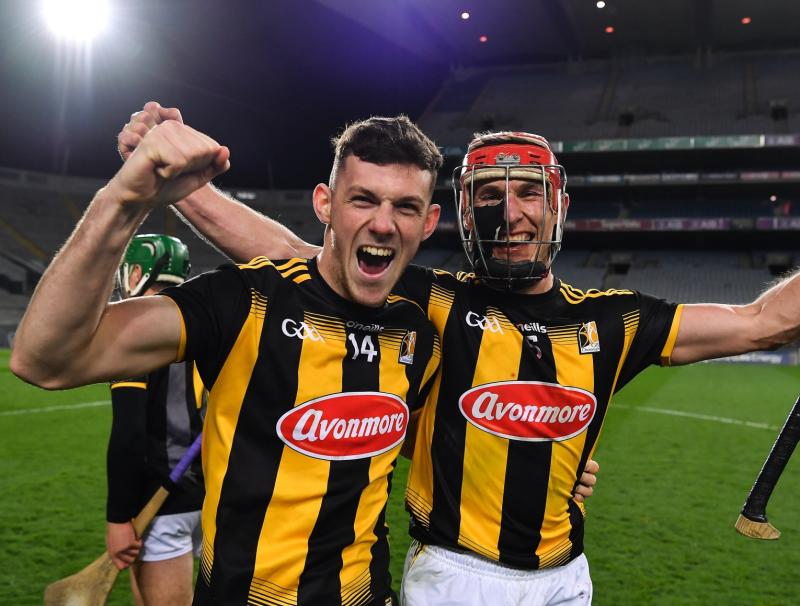 Eoin Cody, celebrating Kilkenny's Leinster title win with team-mate Cillian Buckley, was named the Young Hurler of the Year for 2020

The future looks bright for Eoin Cody, who has been crowned the best young hurler in Ireland.
The Shamrocks (Ballyhale) player capped an impressive debut season with Kilkenny when he was named the Young Hurler of the Year at the PwC All-Stars.
Cody, who made his first start in the League game against Clare, beat Jake Morris (Tipperary) and Iarlaith Daly (Waterford) to the honour.
Cody had a great year with both club and county. He helped the Shamrocks retain their club All-Ireland title when they beat Borris-Ileigh in January, and completed the season with a third straight county title when the Shamrocks beat Dicksboro in the county final.
He continued in a winning vein with Kilkenny, helping the Cats win their first Leinster title since 2016 when they beat Galway in the final. He is the fourth Kilkenny player to win the Young Hurler of the Year since the award was introduced in 1996 - Noel Hickey was the county's first winner in 2000 - and the third Shamrocks man to lift it after James 'Cha' Fitzpatrick (2006) and Adrian Mullen (2019).
"I worked really hard ahead of the start of the year," he said, when speaking to RTÉ Sport. "When we got back into playing with the club Brian (Cody) saw what I had done and gave me a chance in a challenge match. I took it and tried to hold my position for the year."
In what proved to be a busy weekend for Shamrocks players TJ Reid picked up Kilkenny's only All-Star from this year's ceremony, while Adrian Mullen was named county captain for the 2021 campaign.