Do you remember? Kilkenny City celebrate as Cork City are crushed by courageous Cats in FAI Cup 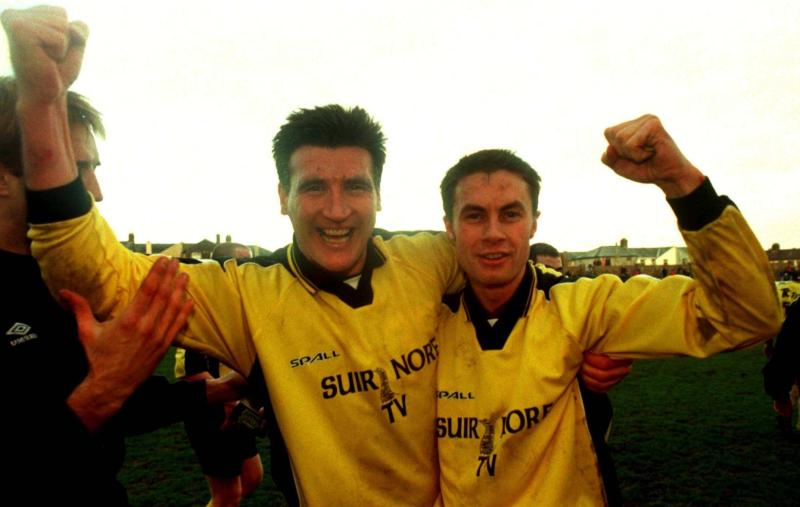 This Kilkenny People sporting flashback reflects on the 2000 FAI Cup third round clash between Cork City and Kilkenny City, a day when the Cats showed their claws in a famous game in Turners Cross

Michael Kerley is the happiest man in the EU this week.
For the Limerick man Kilkenny’s 2-0 victory over Cork City at Turners Cross on Sunday was a dream come true. The central defender was returning to a stomping ground where he had worn the Cork City jersey with pride.
On Sunday he was one of the main reasons why the bookies hot favourites were sent crashing from the Cup.
And as if to add insult to injury for the Turner’s Cross club Kerley was voted Harp Lager man of the match and he hammered home Kilkenny’s second goal to put the final nail into Cork’s coffin.
Prizeman heartbreak
City played with the strong wind behind them in the first half and twice they might have punished a hesitant Cork defence.
As early as the third minute the Cats could have rocked the Leesiders when Jonathan Prizeman burst through but with only goalkeeper Phil Harrington to beat he clipped over the top.
A let-off for Cork who again had a narrow escape in the 22nd minute when Prizeman burst through, but linesman Tony Ryan flagged for offside. However referee John Feighery waved play on but again Prizeman was unlucky when his effort beat the goalkeeper but failed to find the target.
Then just on half time City supporters were in full voice.
The Cats were awarded a corner on the left but that was headed over the top for a corner on the right. The ball was fired over by Ray Carolan and Brendan Rea got there before the towering Derek Coughlan to glance past Harrington.
It could easily have been three but it was still advantage Kilkenny at the break. Now they had to face into the storm. The good ship Kilkenny was under threat but with the towering Captain Courageous Rea at the helm they battled their way through what for a time were stormy waters.
Brilliant Form
Cork poured forward in numbers but while they had territorial possession they still relied on crumbs. They forced a string of corners but with goalkeeper Robert Forde in brilliant form and the defence absolutely outstanding there was no way through, although there were a few scares - one close range effort bobbled across a gaping goal and wide. 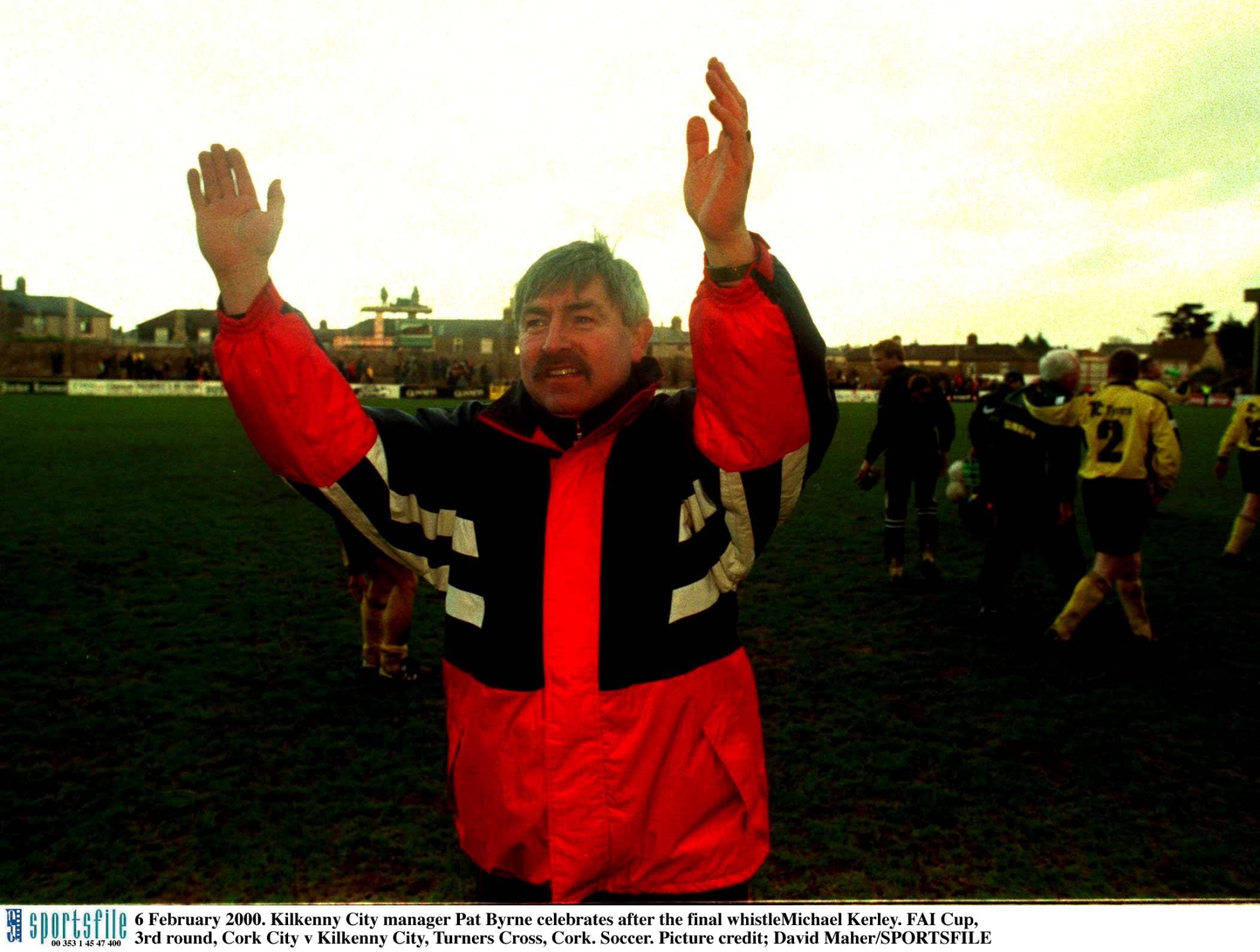 With Cork committed to attack Kilkenny concentrated on hitting them with counter punches. The game was well and truly over after 73 minutes when a brilliant ball by Sean Murray found hard running Aiden Forde and he showed a clean pair of heels to Cork captain Declan Daly who upended him in the area.
Referee Feighery pointed to the penalty spot and Daly was red carded. Kilkenny’s Kerley sent the kick to the bottom left hand corner of the net and the Cats were on the way to the quarter-final.
Major Scalp
The Cats had taken a major scalp. In the past they had beaten the mighty Shelbourne in the Cup, but this was the big one.
Pat Byrne’s team had confounded the critics and shocked the ‘experts’. Cork were 2/5 to go through, Kilkenny were 13/2 in the bookies. Off the pitch there were all sorts of predictions.
On the pitch, where it really matters, there was only one winner, and a deserved one at that.
There were many fine Kilkenny performances. In fact there was not a weak link in the side. Michael Kerley was deservedly voted man of the match but on the day the Cats would have had a strong of contenders for that title.
Cork City: Phil Harrington, Greg O’Halloran, Stephen Napier, Declan Daly, Derek Coughlan, Patsy Freyne, Ollie Cahill, Kelvin Flanagan, Liam O’Brien, Pat Morley, John Caulfield. Subs Colin O’Brien for Liam O’Brien (45 minutes); Noel Hartigan for Caulfield (64 minutes); John Glynn for Napier (70 minutes).
Kilkenny City: Robert Forde (8), Niall Keogh (7), Ray Carolan (8), Michael Kerley (10), David Breen (8), Brian Flood (8), Paul Scully (7), Aiden Forde (8), Sean Murray (7), Jonathan Prizeman (7), Brendan Rea (9). Subs Brian Jordan for A. Forde (78 minutes); Adam Flynn for Murray (90 minutes).
Referee: John Feighery (Dublin).
WHAT HAPPENED NEXT
Kilkenny City made it as far as the quarter-finals of the Cup, bowing out when they went down 2-0 at home to Bray Wanderers, the Wicklow side going through thanks to goals from Jason Byrne and Colm Tresson.
The season did end on a high for Pat Byrne’s side as they secured promotion to the Premier Division for the second time in the club’s history.
In a South-East derby Kilkenny travelled to the RSC and beat Waterford United 2-0 on aggregate in a two-leg promotion-relegation playoff.
The Cats took a 1-0 lead to Waterford thanks to Brendan Rea’s winner in the first leg.
Although Rea was forced off injured early in the second leg, goalkeeper Robert Forde took up the mantle and gave a top class display to keep Kilkenny’s promotion dreams alive.
The netminder made a string of top class saves, the pick of which saw him deny Waterford’s Derek McGrath from the penalty spot with 80 minutes on the clock.
Waterford laid siege to the City goal, but a defence superbly led by Davy Mulcahy would not crack.
The pressure told on Waterford, who were finally sunk when sub Brian Jordan scored the injury-time goal that secured Kilkenny’s place in the Premier Division.