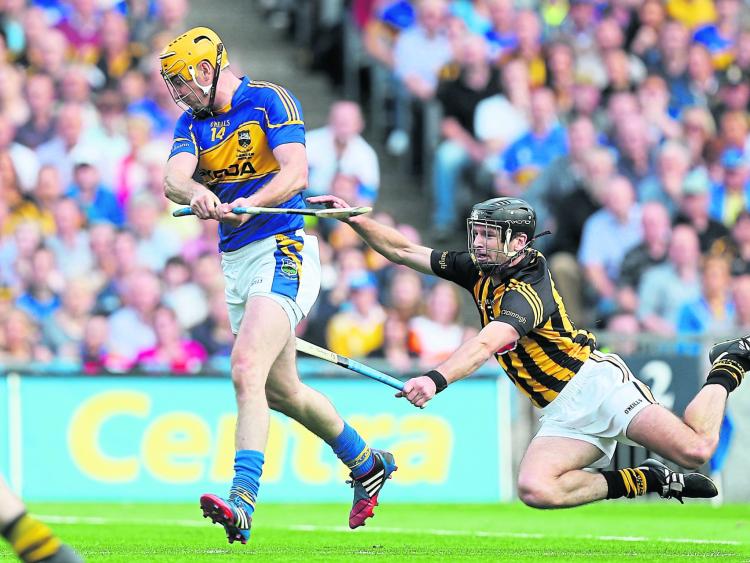 It was a true moment of high achievement. If you blinked you missed it. It was an unreal, never to be forgotten moment.
So much arithmetic, timing, chance taking and even luck all crammed into a split second. We never appreciated a split second in sport could offer so much.
It did in Croke Park on All-Ireland hurling final replay day in 2014.
Mention the time ‘J.J. hooked Callanan' and every Kilkenny hurling supporter of a certain age will readily pop to the day, the occasion and beam a broad, satisfying smile.

You get moments, and then you get something like that…. out of this world, almost beyond belief.
The 81,753 attendance heaved such an ‘ooooh’ gasp of astonishment when it happened they almost sucked every ounce of oxygen out of the arena. The heave was probably heard in O’Connell Street.
It was 17 minutes into Part II of a ferocious contest. Kilkenny were leading by 0-5 to 0-4. Then that wonderful athlete, Seamus Callanan, got on a ball about 45 metres out and headed for the Hill 16 end goal.
It was No. 14 against No. 3 as Callanan turned J.J. Delaney and took off like a hare. He won about a foot of space on the turn. He got the gap up to about two feet, and rising.
Delaney chased, barely holding his ground. The mind was buzzing; thinking options, ripping through possibilities.
He admitted Callanan’s body language gave a hint. As the Tipp full-forward galloped inside the ‘14’ just to the right of goal he began to raise his hurley to shoot.
As Callanan began to drawn down on the sliotar Delaney went with his last option. He dived. At full stretch of arm and hurley and with his two feet off the ground he stretched his body to the limit to touch the heel of his opponent’s hurley.
‘The hook’. Goal chance ruined. The ball was cleared. Kilkenny went on to win the match by 2-17 to 2-14.
As moments in hurling go, that was right up there with the best in the history of the game. Full-backs don’t get to score goals or points.
This was Delaney’s interpretation of a dazzling goal or point. Friends admit the Fenians (Johnstown) man is surprised at how often people from all parts mention that moment.
It was a gift to our generation!