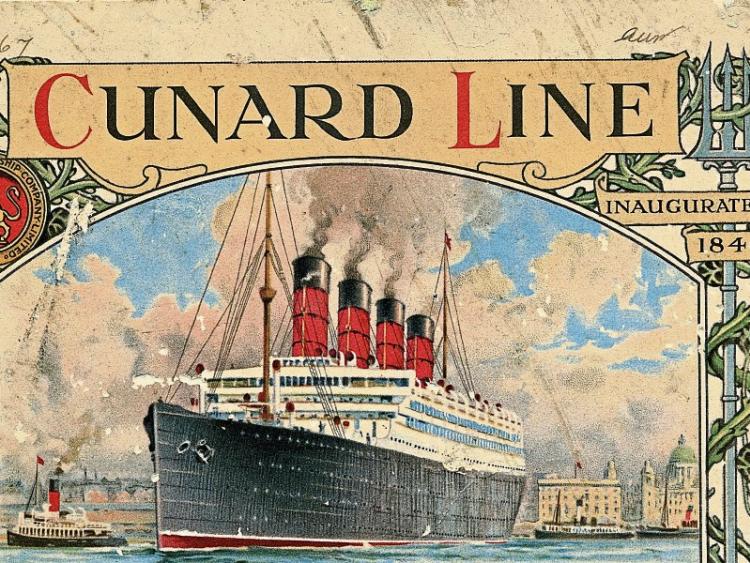 Among the family businesses longest established on Kilkenny‘s High Street the leading contender for that accolade must surely be the travel business of the Manning Family at number nine.

This address occupies part of the site of the old City Gaol and also forms part of the ancient opening to Pudding Lane. It seems probable that the three adjoining buildings, Mannings Travel, The Tholsel Bar and Carraig Donn, were all constructed together following the demolition of the gaol. As a consequence, they share a common roof line and a number of their respective architectural elements are also similar. Many years ago Tom Manning brought me down to the basement underneath his Travel agency and we speculated about the original purpose of the large, strong and old iron rings firmly set into the walls there. Could they have been linked to the previous use of this area as a prison dungeon?

The antiquity of the buildings in this area has been explored by no less an authority then Dr Michelle Comber, Academic Director, International Summer School NUI Galway. The space beside the house - between it and the Book Centre - research led her to speculate was probably the medieval entrance gate to Pudding Lane. She noted that it was comprised of two sets of double doors within the entrance passage, both marked by a stone sill and a pair of spud-stones (pivot stones/sockets). Three of the four jambs are also of cut and dressed stones and were located and identified during her field trip examination. The dressing methods and styles suggests a late medieval date. This entrance was not the original one as it was probably constructed around the 15th or 16th century.

Manning’s bar, where Des Manning held court (now the Tholsel Bar operated by Tommy Lawlor and his wife), was a well known and popular hostelry. In the late 1950’s, early 1960’s, it acquired the status of the unofficial socialising headquarters for rugby club members before the club obtained their own premises at Foulkstown some years later.

Des had a lively, perhaps even at times a notorious sense of humour and this could land some of his customers in hot water, as I once found out to my cost. At the time my favourite tipple was the short lived but very palatable Kilkenny brewed “Extra Time” beer. This very definitely did not suit Des, as he had to get in supplies of it just for me – his sole customer for this particular brew. Des only bought Extra Time in half dozen, half pint bottle lots which he did but not always with good grace! On one occasion when he happened to meet this writer’s father, he remarked conversationally – as one does - ‘just in passing like,’ that I had drank him out of Smithwick’s beer two weeks in a row! He conveniently omitted to mention the small amount of beer involved in my weekly ‘drinking him dry’! The Manning family or more correctly sept motto, in Latin Manus hoec inimica tyrannis “This hand is hostile to tyrants” was clearly at work!

Des’s father, Tom Manning (1889 -1947) ran a grocery business from the front of the shop, with the bar confined to the rear half of the premises, accessed via two swinging doors. The bar could also be entered from the laneway to the rear; a convenient and discreet entrance often availed of in different times. As the popularity of the bar business expanded, the grocery area became more and more truncated, before finally disappearing all together to be replaced for a short time by the establishment of the “travel desk” marking the emergence of the full time Manning Travel Agency.

Beginnings of the travel trade

The travel business had been an activity of the family for generations. As early as the 1860’s, the first of five generations of the Manning family (Thomas Manning 1847-1902) had acted as agents for a number of major shipping lines. The colourful Cunard Line Agents Authority Certificate attesting to their appointment is still an heirloom of the agency. Advertisements in the Kilkenny Moderator and the Leinster Journal attest to the popularity of travel at that time, sadly for very many a one way trip leading to life long emigration as opposed to today’s leisure holidays.

The attraction of the travel business, with its regular hours and the absence of having to move heavy barrels and kegs, proved too strong for Thomas Desmond Manning (1922 - 1984) ( known to all as Des). He decided in 1962 to sell the bar premises which had been in the family since they sold the “home place,” a substantial farm in the Johnswell area, in the mid 19th century. Initially, Des moved just across the street to occupy the long and narrow premises, once the domain of the redoubtable Miss Purcell’ ice cream parlour. Who can ever forget the regal manner in which that formidable lady dispensed her wonderful, home made ice-cream to us children garnished with that never to be forgotten raspberry cordial?

Des reveled in the travel agency business and the trade expanded to the point where his son Tommy was to join him from his job on the administrative staff of the then expanding Kilkenny People Newspaper. Father and son built up a significant business. It expanded first to the premises next door - now Oliver’s studio - before their final move in 1984, taking the short distance but huge step of acquiring the much larger and prominent location formerly operated by Dick Reynolds’ butchers shop. Mr. Reynolds was a man incredible and rightly protective of his four handsome daughters and justly proud of his two sons, Jim and Val. But theirs is a story for another day.

Artists run in the Manning family; James (1929-1983), brother of Des above, was an artist of note and exhibited in both Dublin and in Kilkenny. His exhibition of drawings and paintings during the Arts Festival in 1977 in Kytelers Inn proved popular and successful , his application to Mrs Phelan (MMP) for space in Kilkenny Archaeological Society‘s Rothe House arriving too late to be accommodated on that occasion.

In a previous generation Thomas Manning (born 1847 1902) following the early death of his first wife, Mary Ellen Walsh, married Margaret the sister of John Comerford (1873- 1923), a noted and hugely successful portraitist and miniaturist. The son of a High Street merchant family, John unlike so many artists of the time, did not end his days in the garret without funds or friends, but rather in comfort and conviviality among his fellow artists and a wide circle of admirers.

The fourth generation of the family Thomas, progressively took over the travel business from his father and with energy and flair increased customer numbers as he developed the range and extent of services on offer to them. Their services include leisure travel, corporate travel, group travel, even weddings and honeymoons. The annual pilgrimages from the Diocese of Ossory to Lourdes, organised by the family over many years, were an important milestone for a great number of persons, many themselves infirm.

The last few years have been challenging times for the retail travel industry in common with many industries and undertakings, but Manning Travel has embraced new technology and firmly focusing on customer service, has maintained their status as one of the premier independent travel agencies in the country.

For some one who encouraged so many to take to the skies it might surprise that Tom Manning’s (1947-2003) other passion in life was caving! This was an activity at which he was adept, skilled and experienced. He approached this specialised adventure sport with the same attention to detail and careful preparation that marked so much of his activities and practices. He delighted in exploring little-known locations and his special joy was to explore small caves and hitherto hidden souterrains, like the one we both explored together near the top of Glenbower on the road to Clonmel, following a useful if somewhat inaccurate tip-off from an interested local. This was an event – a voyage of discovery for us both - which I recall with particular pleasure. His interest in these and early field monuments led to his joining and supporting Kilkenny Archaeological Society, a life long association. The influence of his new wife, Betty Bourke whom he married in 1973 in this development and in the broadening of his civic and business activities should not be discounted either.

Energetic in business Tom was active in the promotion of Kilkenny as well and very prominent in Chamber of Commerce affairs. He served as President of that body as did his lifelong friend, Seamus Costello. I tried to check on the year(s) of his presidential term in office but surprisingly there is no phone number listed for Kilkenny Chamber of Commerce in the 2012 telephone directory!

Tom’s wife, Betty Manning, nee Bourke, herself a descendent of the “Worth will Tell” Tailoring family of High Street, also played a part in Kilkenny’s growth. She believes that gender is no longer a barrier for women, either in business or politics, having experienced the highest honours that local politics can offer, formerly served as Mayor of the City. Even before she entered politics, Betty was well-known in business and community circles. She spent over 20 years doing voluntary work in the City.

After the sad and untimely death of her husband Tom climbing Slieve-na-mon on Stephen’s day in 2003, Betty took up the reins at Manning Travel. The family continue the tradition of climbing Slieve-na-mon each 26th of December. There is a growing monument there at the point when Tom died which is being added to by additional stones left by his many friends who pause to remember him

Betty continues to help and advise in the business today. The business is run by her son, Des who is the fifth generation of this family to serve Kilkenny as a travel agency a legacy which surely marks the Mannings as another of Kilkenny’s Prominent Families.