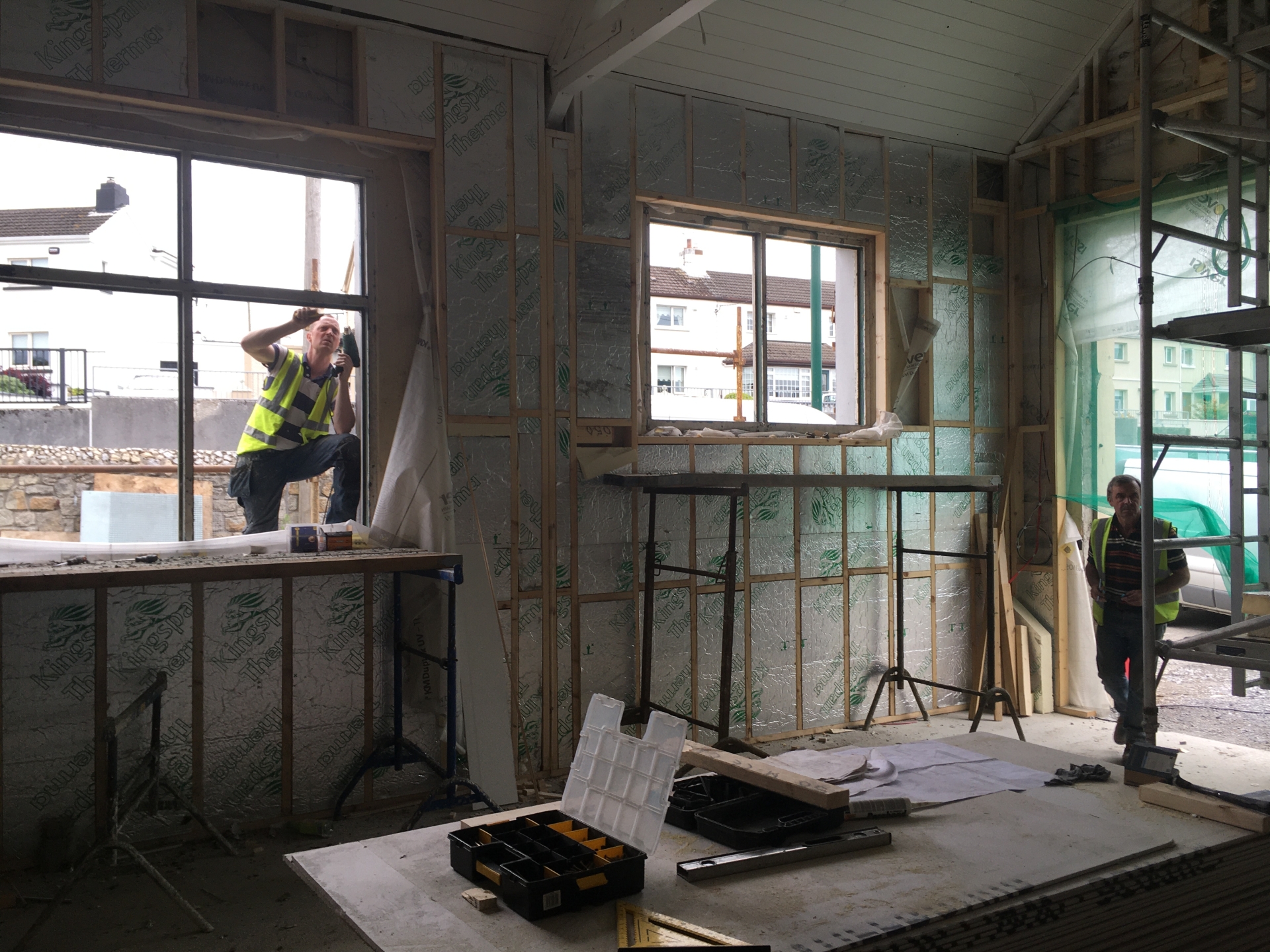 The National Inventory of Architectural Heritage listing for Graignamanagh’s creamery building notes that much of the historic fabric maintains the positive contribution made to the character of the locality:

“A pleasant small-scale building representing an important element of the early 20th-century architectural heritage of Graignamanagh having traditionally supported much of the local agricultural economy,” says the NIAH entry.

“Despite the utilitarian purpose of the site a range of fine details enhances the architectural design value of the composition.”

Sustainability is high on all our agendas these days; Ellen and Maccon are no different, as they took on the challenge of converting the well-known building..

The couple, along with their architects Philip Byrne (Byrne & McCabe Architects) and builders Tierney & O’Neill gave a new lease of life to the 1915s build and turned it into a high-tech modern pharmacy.

They strove to conserve the uniqueness and original features that the building had to offer. It was a massive task – all 122 square metres of it.

“This building had sadly become an almost derelict site at the entrance to a beautiful town, and we wanted to give it purpose and life again,” Ellen says.

The locals seem pretty happy with the conservation project too.

“It’s been lovely chatting with well-wishers about their memories of playing in the old building, of coming in to drop off milk or collect butter from Brandonvale Creamery years ago. I’m happy to say they all seem so delighted to stand inside the old building again,” she adds.

They also had to restore fully the original internal creamery ceiling with beautiful, exposed beams and trusses. The pharmacist even had a resident bat and some nesting pigeons to deal with during the construction stage, which only added complications.

They restored and retained the old cast iron pully which was still attached high up on the interior wall from decades ago. There were also old brackets remaining which had once held a water tank in the main hall of the creamery.

“Growing up in Graignamanagh, the old creamery was a landmark building and was only five minutes away from my homeplace,” Ellen says.

“It had a flat roof extension at the front of the building, which apparently was added on in the 1960's. We removed this to return the building to its original shape.”

"We also made the decision to re-instate the old 'Brandonvale Co-Operative Creamery' sign above the main doorway, which was long gone, but visible in old photos from its early days. I think it’s a lovely reminder of the history of the building and we were delighted to see it back where it belonged.”

The interior of the main hall, which is now the retail space, had been tiled previously and was retained to its old state.

Throughout the years working in numerous different pharmacies Ellen had seen many different pharmacy layouts. She knew what would and wouldn’t suit a very special building like Brandonvale Creamery. She was very conscious to develop the depth of history behind it.

When drawing up the interior design with the shopfitters, she had regard to have a mix of a traditional and modern designs, in keeping with the overall style of building.