It’s hugely important that we look after the resting places of the people that went before us.
This was the poignant message from County Council chairperson Cllr Fidelis Doherty as she visited sites in the Callan area, last weekend. (Scroll down to read more and click 'NEXT' to see more photographs) 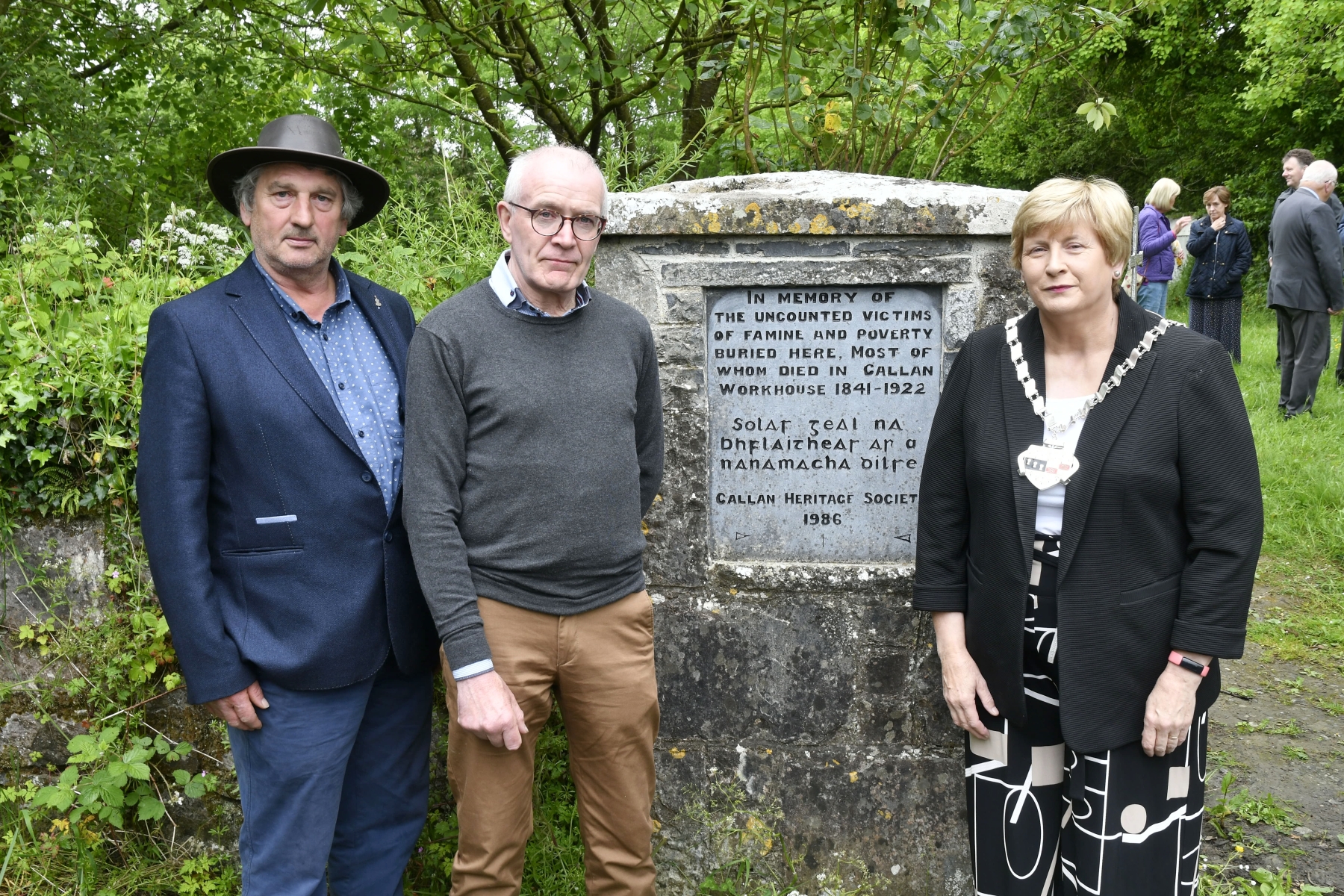 Cllr Doherty first visited Cherryfield Famine Graveyard, just outside Callan, and later the ruins of Coolaghmore Church and its graveyard.
Praising the work that has been done by the community in both places, Doherty said it is nice to remember the people who travelled the fields and these roads that we now travel.

Cherryfield Famine Graveyard is thought to be the last resting place of up to 5,000 people, local historian Joe Kennedy said.
It is thought that during the Famine, bodies were brought not only from Callan Workhouse but from as far away as the workhouse in Carrick on Suir.

There are no grave markers and until 30-40 years ago it had been overgrown and cars couldn’t even drive up the lane to the site.
When the Callan Heritage Society was founded in the 1980s they made it an objective to do something about Cherryfield.

Today it is well kept, thanks to James Bailey, and a memorial has been erected there to communities across the world who have also suffered from famine.
The lane was resurfaced by Kilkenny County Council last year thanks to the financial assistance of farmers along the lane - David and Helen Cahill, John and Shane O’Keeffe, John and Siobhán Power, Ger O’Brien and Paddy Condon.
Great credit also to engineers Declan Murphy and Frank Stafford and all the county council crew.

Sherry FitzGerald McCreery in Kilkenny prepare for 100k in 30 Days

Over the years, Callan Heritage Society have written about the site’s importance, ensuring it is remembered.
Kilkenny County Council are now in the process of taking ownership of the cemetery.
On Sunday, a short prayer was led by Br. Christy Carroll and a musical lament was played on harmonica by John Lyons, at both sites.

The local community then welcomed Cllr Doherty to Coolagh Old Abbey, once the parish church of Coolaghmore.
Originally built in the 12th century, the graveyard features curios like a stone with braille, another with an unusual date and the site where a sheela na gig (stone carving of a female figure) was found in the 1970s.
It is now looked after by the Coolagh Pattern Committee and Chairman Billy Maher made a presentation to Cllr Doherty to mark the occasion.
A new parish church was built nearby, in the 1890s, at Coolagh Cross.

Pictures: Miles of smiles as runners got their thrills in Tullaroan hills!

Coolagh Cross was included in the County Council’s ‘Low Cost Safety Scheme’ last year to reduce speed and make the area safer.
Both the Collagh Pattern Committee and the Caherleske and Coolagh Group Water Scheme contributed to the cost.

Click 'NEXT' to see lots more photographs from the day.