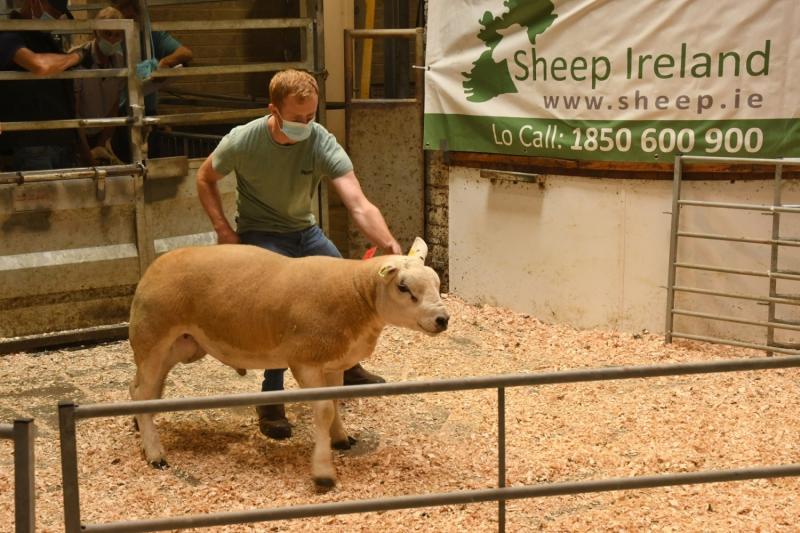 A Ram being paraded in the Sales Ring at Cillin Hill. PICTURE: HARRY REID

Sheep farmers are not over plentiful in Kilkenny with dairy farming being the main farming enterprise, but last Saturday Kilkenny Mart attracted hundreds of sheep farmers interested in purchasing a ram at the Sheep Ireland Ram Sale.

This sale attracted buyers and sellers from all corners of Ireland, including Northern Ireland Donegal, Kerry, Galway, Dublin,Wicklow to name but a few, with first time visitors very impressed with the facilities at Cillin Hill.

The catalogue contained an entry of 412 rams but after withdrawals and rejections by the inspectors 365 stood their ground with 309 sold which resulted in a 85% clearance.

Vendeen were next with an entry of 13 and 12 finding new homes to average €518 with a top call of €740 for an animal the property of Cheryl O’Brien, Kildorrey, Cork.

Hamphire Downes accounted for 8 rams with 7 selling to average €435. The top call in this sector was €500 for an animal belonging to Michael Gottstein, Dunmanway, Co Cork.

The Rouge de L’Ouest breed attracted 5 rams with 4 selling to average €442.50 with a top price of €500 for a ram owned by Brian Matthews, Killeigh, Co Offaly.

A small number of Border Leicesters saw an average price of €520 with a top call of €660. All three animals were owned by Coote Geelan from Leitrim.

In the Lleyn sector the 9 rams on offer saw a 100% clearance to average €537 with the top price recorded by Brian Matthews for €820. This ring concluded with Belclares which resulted in a 100% clearance with an average price of €611 and a top call of €820 for a ram the property of young breeder Edwina Gottstein, Co Cork.

Suffolks were the first breed into Ring 2 with an entry of 51. The average price here was €717 with a 89% clearance with a top price of €1220 for Jim and Frampton Jeffery, Midleton, Co Cork.

The Texel breed attracted an entry of 131 with 114 finding new homes to average €648. This sector also recorded the top price of the day with €3,300 being secured by John, Colm and Michael McHugh, Carrickmacross, Co Monaghan. This breed also resulted in the second highest price of €1360 for a ram owned by the same Monaghan breeders who had a very successful day.

This Elite Euro Star Multi breed Ram Sale is aimed at the commercial sheep farmer with all animals on offer being genomically tested in the top 20% of the breed.
A very successful day for all the team of Sheep Ireland and Kilkenny Mart.

Monday's Sale
Monday’s sale was a lively affair with a full clearance of lambs. Butcher types ranged from €130 to €152 per head factory types €110 to €137 per head with store types also in demand with prices ranging from €78 to €112 per head.
Cull ewes saw a reduction in price with a top call of €168 with again all lots being sold.

Our next dairy sale will be held on Monday, September 20, entries now being taken.

All cattle should be entered before 3.30pm on the previous Wednesday. Kilkenny Mart office number is 056 7721407.

Until next week keep safe on the farm at this busy time. Good buying, good selling and good luck.

Huge attendance for welcome return of the Coon Vintage Rally