The unique ‘Ossory’ dialect of Irish once spoken in Kilkenny 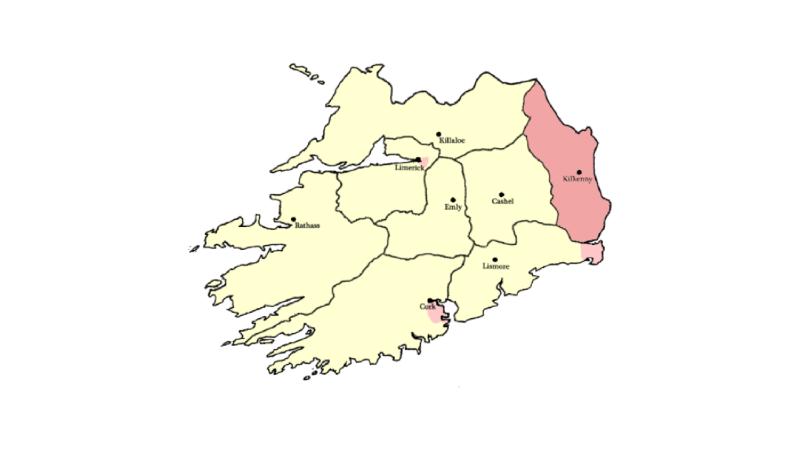 Ossory was a medieval Irish kingdom comprising what is now County Kilkenny and western County Laois, corresponding to the Diocese of Ossory (pictured in deep red)

As time continues to pass by, we grow more detached from a time when we had native Irish speakers throughout Kilkenny.

Our county has had its own storied and unique history with our native tongue, but many of the primary history sources on the topic remain either scattered, inaccessible or as yet unexamined.

Rián O’Kelly, a young scholar with a passion for linguistics, has been steadily collating some of the primary characteristics of the Irish that was once spoken in Kilkenny, i.e. ‘the Ossory dialect’.

The medieval Irish Kingdom of Ossory existed roughly around the same area as modern County Kilkenny it extended further North into parts of western County Laois.

It is in this area that the dialect was spoken natively right up until the post-Famine era.

For Rián, the ‘Ossory dialect itself is an interesting one’.

“You could class it under the branch of East Munster falling along one end of a spectrum which once stretched from parts of Clare eastwards,” he told the Kilkenny People.

“The dialect itself shares many features with the Irish found in Ring in County Waterford, however it is definitely distinct.

“It contains many features formerly found in parts of Tipperary, Clare and certainly elsewhere in Leinster with a good deal of its own unique qualities too.”

Unfortunately, Kilkenny Irish is not taught and any attempt to learn its quirks requires a lot of research.

Rián still believes that, despite this, it can still be learned to a high degree of authenticity.

“There are few resources to learn and unfortunately, possibly the most important document, a thesis written by Risteard Breatnach on the dialect, is locked up unpublished in UCD,” he said.

“You could use this thesis and other materials to learn Kilkenny Irish from scratch although it would probably be extremely difficult.

“A better way would be to first learn a living Irish dialect to a middling level and adapt your Irish until it conforms with the materials currently available.

“No doubt the easiest way to learn is by using the Irish of Waterford (and Tipperary, another dead dialect) to supplement your learning as the dialects are quite similar.

“A number of excellent materials exist for learning Waterford Irish. Phonology, grammar and idiom from this region are all very well documented with a sizable corpus written in the dialect so this is definitely a great help.”

To get a better understanding of the nuances of the Kilkenny dialect, O’Kelly has studied audio from Pádraig de Paor, a native Kilkenny speaker born in the 1850s, which has survived until now.

It is unclear when de Paor died but he was alive in 1936 for a recording made by Séamus Ó Duilearga for the Irish Folklore Commission and lived to at least be 92 years of age.

“In the 1911 census, himself, his wife Margaret and son Walter are all given as being able to speak both Irish and English however his daughter Bridget (18) has nothing written in the column designated ‘Irish Language’.”

350 new jobs on the way for South-East region

Rián notes that Irish likely started its final decline in Kilkenny around the 1820s or earlier until the very final native speakers were born around the 1850s.

He believes evidence suggests that it continued to be a community language until around the 1870s.

“Varying reports suggest that older people speaking Irish amongst themselves were last to be heard in the 1900s-1920s,” he added, before noting that this is just an estimate and he has not done enough research on language death to assert this confidently.

Rián constantly listened to the audio from Pádraig de Paor trying to memorise it and figure out the general sound of the dialect.

“This presents a few difficulties,” he said.

“The audio is not clear and can be difficult to make out. De Paor is telling a story and so is presumably using a storytelling register different from casual speech and de Paor likely also hadn’t been used to speaking the language in several decades and there is a good bit of interference of English in his Irish.”

Dunmore Caves in Kilkenny to remain closed until 2023

An audio recording was also made of native speaker Margaret Cody in Mullinakill in 1933 when she was 78 years old.

Although Rián has not yet obtained this recording, he notes that it is referenced in Eoin O’Kelly’s 1969 book ‘A History of County Kilkenny’:

“A dictaphone recording of the Ossory dialect was taken in 1933 from the late Mrs. Cody (née Breathnach) of this townland... She was then 78 years of age and Irish was the language of her home in Mullinakill until she was 20 years old. She had a limited knowledge but retained the ‘s’ sound of this dialect.”

As there is such little audio available to Rián, it is impossible to know all the quirks of the dialect just yet.

Redbrick property close to Kilkenny border could be the bargain for you - see more!

Despite this, he has compiled a few of many distinctive features of the dialect to remember:

Slender R
The slender r varies across Gaelic dialects but in Ossory it is unique.

This sound is essentially the same as the g in beige or j in the French word je.

This is incredibly similar to the slender r found in speakers particularly from the Dún Chaocháin peninsula in Erris, County Mayo.

This is seen in the words Rinn, linn, tinn or éinne which are pronounced with /ŋ´/ and are often spelled Ring, ling, etc.

Many vowels are raised in the presence of a nasal consonant. This is a common shift in many languages. /o:/ often becomes /u:/ such as in the words mór, feirmeoir, tóin etc.

Stress is generally strong on the final syllable.

Like in Connacht and Ulster, the final consonant is often devoiced.

This is mainly found in words ending in a g changing to c in those two provinces however this is done more liberally in Kilkenny with words such as eilic /el´ik´/ for uilig etc.

This is never seen with Gaeilig /ge:l´ig´/ which seems to always retains its voiced g.

There is a small but studious and dedicated linguistic community online who are trying to piece together all the facets of the Kilkenny dialect and Rián is one of the cogs in that machine.

They have already made great strides but it’s a huge puzzle and the pieces needed to complete it are getting harder and harder to find.

As Rián states, “until myself and others are able to make our own materials, learning Kilkenny Irish will be a struggle compared to any living Gaelic dialect but it is definitely worth it.”

Other sources of Kilkenny Irish that Rián has identified as useful to his research include:

This is a diary kept by Amhlaoibh Ó Shúilleabháin. Ó Súilleabháin was born in Cill Airne/Killarney in County Kerry but relocated to Callainn/Callan County Kilkenny aged nine with his family.

His diary was apparently not written in the Classical Gaelic of the time but rather in a colloquial style.

A collection of poetry and songs written from the region, the majority of which comes from pre-Famine Kilkenny.

“I would assume that a lot of what’s written here is again in Classical Gaelic since it is verse but that’s to be seen.”

This book has plenty of material from Kilkenny as well as other counties in Leinster.

The longer material is generally older however there is still quite a bit.

Rián hopes this piece will help anybody interested in learning this dialect and he is urging people who are thinking about doing it to give it a go.

“Ossory Irish is packed with interesting features and is a dialect historically spoken in Leinster.

“It has an interesting spot in the dialect continuum sharing qualities with Irish from all provinces and for anybody from the historical area of Ossory, it is of course the dialect of our recent ancestors whose language died too soon.”