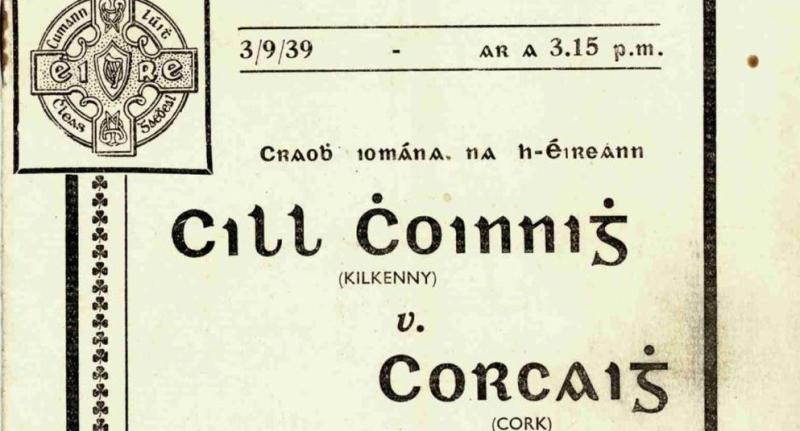 There was the usual build-up of excitement in the week leading up to an All-Ireland Hurling Final. Those who could afford a newspaper studied everything written on the game before discussing it with their neighbours. It was what helped form opinions for those still unsure as to what team could win and what players could win it for them.

My father’s (John Flanagan) uncle, John Colgan, was the one with the wireless in the locality. On the Thursday, the battery was brought to town to be recharged at Phil O’Reilly’s. The typical routine on the day was for the elderly neighbours to arrive early and settle in the kitchen where chairs were scarce. Those more able bodied remained outside leaning against the front of the house while young lads like my father sat along the low wall facing the road. With the wireless perched on the sill, the sash window was raised for the sound to carry in and around the house for everyone to hear.

This particular Hurling Final took place on the 3rd September, the following day my father would return to school. Torrential rain left him soaked through that morning after attending Mass. When it came time he headed up to his uncles on his own. His father was considered unusual in that his only sporting interest was backing horses. Mick Dunne was the first of his friends to arrive then came Billy Daly with his father Jack along with Michael Mulvihill whose father had been killed sinking a well for the council. With the rain still lashing down, there was no question of them sitting along the front wall. Instead, they tightly shuffled into the kitchen like sardines where a fire smouldered and it stacked with turf.

Kilkenny GAA- Danesfort and Thomastown to meet in league decider

Offaly’s contribution to the game was the referee, Tullamore born and bred, Jimmy Flaherty. Offaly had never reached a hurling final; their neighbour’s Laois had won it once while Tipperary held the title twelve times.

His first broadcast of an All-Ireland Final, nineteen-year-old Michael O’Hehir welcomed them to Croke Park. Hearing how the weather had hampered many from travelling up to the match, my father imagined every house with a wireless in Cork and Kilkenny packed with supporters more anxious than them to hear the game broadcasted. Not knowing all the words, he sang what he could of the national anthem. After the GAA president, Paddy McNamee threw in the sliotar, O’Hehir described how the sun was breaking through the clouds as if it symbolised a real sense of optimism.

Kilkenny were hoping for their fourth title in that decade, they had support in the kitchen from those who valued the skills they’d brought to the game. Cork, on the other hand hadn’t reached a final since their win in ’31. They were backed by those hoping for an upset, for the underdogs to be sharp enough to break through and claim victory.

Three minutes in Michael O’Hehir’s thrilling words ran one into another when Kilkenny’s Jimmy Phelan found the net for a goal. He had a vivid way of describing the play, methodical as a player bent forward to lift the sliotar to standing steady to striking it hard. Other times, jovial, as a player ran forward, sliotar in hand having discarded his hurl or even his boot, frustrated when players jostled frantically for possession resulting in foul play or an unforgivable wide. Kilkenny were six points ahead at half time.

The game resumed to a hissing sound from the wireless as my father’s uncle shot a worried glance around the kitchen. No one said a word until O’Hehir’s voice crackled through to explain the interference was due to heavy thunder and lightening.

When Dick Brian commented that it was cruel weather for a hurling final, Jack Daly was quick to reply, ‘But sure when Laois bet Cork in ‘15 the rain was that heavy they wore overcoats in the second half.’

That should have been the start of humours tit for tat remarks from one to another, but not that day, for the mood in the kitchen remained sombre. The hissing sound faded in time for O’Hehir’s voice to reach its highest pitch when Jack Lynch scored a goal for Cork as if it was the key to raising the bar, to delivering the best hurling possible for an All-Ireland final. As if electrified by the lightening, Cork continued to storm the field. With two minutes to go, the teams were level. Shouts of encouragement ran around the kitchen as players fought for possession before Jimmy Kelly scored the last point of the game. After the puck-out, the whistle was blown. Kilkenny were champions and Jimmy Flathery had done them proud.

My father returned home to find his brother Jim along with his mother and father sitting around the fire. As the rain had eased, she pressed him to go fetch water from the well.

Bucket in hand he lifted the latch on hearing her ask, ‘Do you think there’ll be rationing?’

His father leaned forward to reply, ‘No surer thing.’

TJ Reid shortlisted for PWC Hurler of the Year

He was eight years old with no way of knowing that the British Prime Minister Neville Chamberlain had declared war on Germany that morning. The news had filtered through the locality after his uncle heard the announcement on the wireless.

In bed that night he rewound the match in his head which left him questioning whether those in Croke Park that afternoon in such raw weather got as much pleasure watching the game as he did listening to it broadcasted on the wireless. Then he considered the following day when he’d meet up with his friends to head across the grass-soaked fields to the two-roomed school in the Meelaghans.

He was fourteen when the war ended.