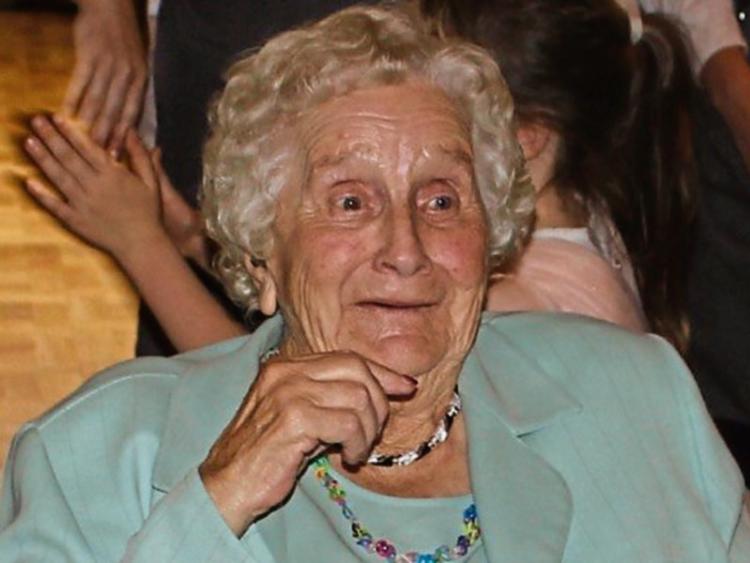 Alice Kennedy who died in Drakelands Nursing Home on March 28 lived in Bennettsbridge for most of her life and was one of its oldest residents. Her death was heard of with great regret in the parish, a parish to which she gave great service, in many different ways, throughout the years.

Alice was born on 12/09/1925. She was one of 11 children born to Mary and Patrick Reid. Her early life was spent in ‘The Jocks’ which was part of Mount Juliet estate. Like all her siblings she worked in Mount Juliet until she married the late Dan Kennedy in 1948. After her marriage she and Dan settled in Bennettsbridge and raised their family in The Ring. Bennettsbridge Hurling became a central part of her life and she saw her husband, Dan captain Kilkenny to beat Cork in 1947 All Ireland final, albeit he was representing Thomastown in that final. Alice remained an enthusiastic supporter of Bennettsbridge and Kilkenny right up to her death. Indeed at her 90th birthday in 2015, Alice was proud to hold the McCarthy Cup in the presence of her family after Kilkenny had beaten Tipp in the final.

Alice was a wonderful mother and together with Dan raised eight children Walter, Mary, Pat, Margaret, Donal, Ann, Caroline and Declan. She had 21 grandchildren who were a central part of her life.

The loss of Dan at 52 was a terrible blow and she was to suffer further tragedy with the untimely death of her daughter Caroline at 47. As her health started to deteriorate Alice was cared for at home by her son and carer Pat assisted by the rest of her family. For the past two and a half years she had been under the wonderful care of Anne and the staff at Drakelands nursing home.

Alice was waked at her home on Station Road. Rosary was recited by Canon Patrick Duggan. As the remains were removed, a Guard of Honour, formed by Bennettsbridge GAA Club escorted the hearse to St Bennett’s Church.