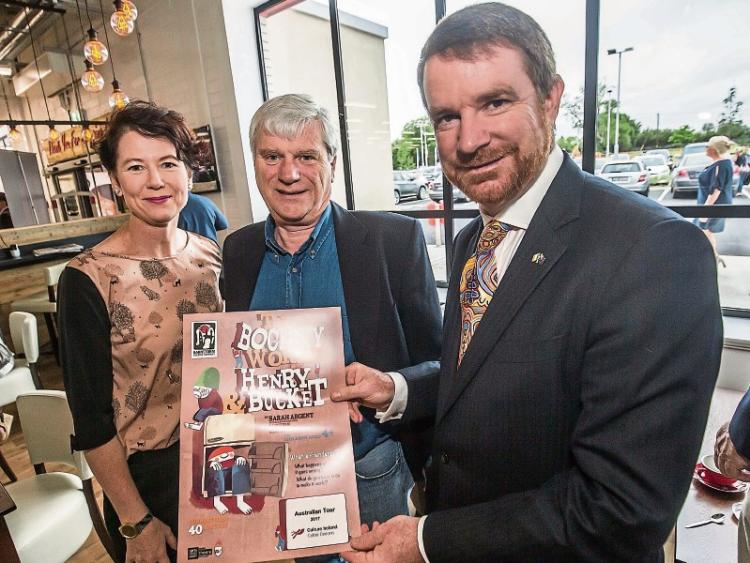 The Australian Ambassador to Ireland, Richard Andrews, wished Bon Voyage to ‘Bockety’ when he met Vincent Dempsey and Cathy Hogan in Kilkenny last week ahead of Barnstorm Theatre Company’s upcoming tour of Australia.

With the generous support of Culture Ireland, Barnstorm will present ‘Bockety’ at venues in Sydney and Paramatta between September 13 and 30

Written and directed by Sarah Argent, the play has toured the UK, in Ireland twice, and earlier this year it was very well-received across America and Canada.

Created especially for children aged four and older and their families, The Bockety World of Henry & Bucket, featuring actors Paul Curley and John Currivan, looks at friendship through a day in the life of two buddies who live in a bockety world of discarded objects.

Responses to this play at home and abroad have been extremely enthusiastic – one festival director described it as ‘like Beckett for children’ while another reviewer noted the two friends are a ‘modern-day Laurel and Hardy’.

“While September is still a little way off, the set and costumes have already taken to the high seas and are now en route down under,” Vincent Dempsey, the show’s producer said. “And we look forward to reuniting with them at Sydney Harbour.’

Closer to home, Barnstorm Theatre Company in partnership with Kilkenny Arts Festival, recently launched StormFest – their Season of Family Theatre, Storytelling and Workshops from August 12th to 20th. For further information and to book tickets go to kilkennyarts.ie or pop into the local festival box office which opens on John Street, Kilkenny on July 13.

Founded in Kilkenny in 1991, Barnstorm Theatre Company creates and presents quality theatre for, and with children, young people and adults.