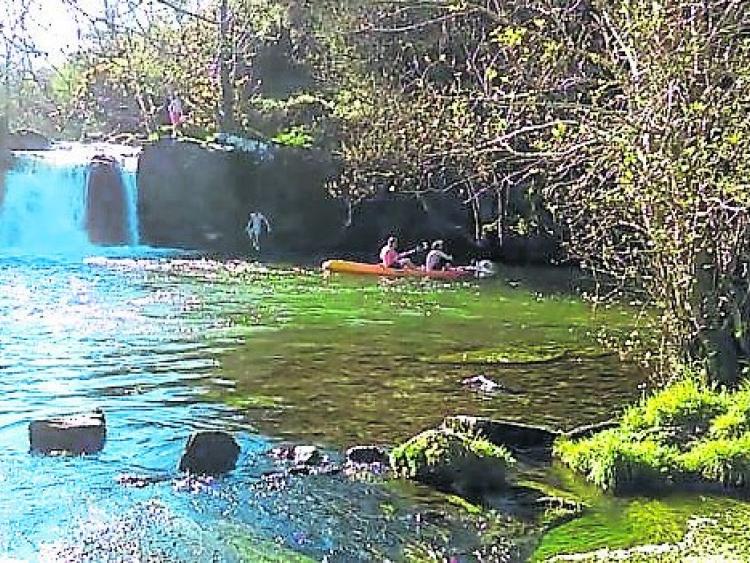 Poulanassy Waterfall near Mullinavat is a glorious place to be in Kilkenny on a hot day, with its rope swing and many ledges from which to jump

Increased publicity, coupled with the lasting spell of good weather, have contributed to a number of problems at one of  Kilkenny's most enchanting hidden beauty spots.

The scenic Poulanassy Waterfall near Mullinavat is a glorious place to be in Kilkenny on a hot day, with its tree-shaded banks and rocky outcroppings from which to jump and dive into the wide river and its plunge pool.

At the July meeting of the Piltown Municipal District, local councillor Eamon Aylward said it was great to see the amenity being used, but there were some issues arising as a result.

"The place is crowded at the moment, and there are serious issues with parking," he said.

"It's a very narrow road at the best of times, but there could be 20 or 30 cars there on any given evening."

Cllr Aylward said the road was used by farmers who were trying to get through tractors and large machinery, and that a milk lorry had encountered serious difficulties passing on one recent occasion. He also noted that some cars had been broken into.

There is no lifeguard on duty at Poulanassy. And, while there were two lifebuoys there originally, one has gone missing, while the other has no rope.

"It's great to see people enjoying it, but there are health and safety concerns," said Cllr Aylward, asking if there was anything that can be done in the short term to alleviate traffic management issues.

Area engineer Ian Gardiner said he did not know what short-term solutions could be offered. He said if obstacles were put in place, people would just park further along, simply moving the problem elsewhere.

"The long-term solution is what we are trying to do - providing long-term parking for 30 spaces," he said.

Cllr Aylward asked him if signage -warning people that the road width suddenly changes (due to parked cars) - might help, or if it would merely legitimise the current situation. Mr Gardner said it might be the case it would appear to legitimise it. He said he would report the situation with the lifebuoys, and said they had gone missing a number of times before.

Cllr Melissa O' Neill said people's lives were more important than cars, and it should be the number one priority. She suggested the lifebuoy matter be referred to the Water Safety Committee.

Senior executive officer Brian Tyrrell confirmed that the council had received a number of phone calls asking 'where is Poulanassy Waterfall', and that people were now visiting who had never been before.

Mr Tyrrell said it was members of the public that were interfering with the lifebuoys, and the message should go out regarding water safety. Cllr O' Neill added that parents needed to supervise their children.