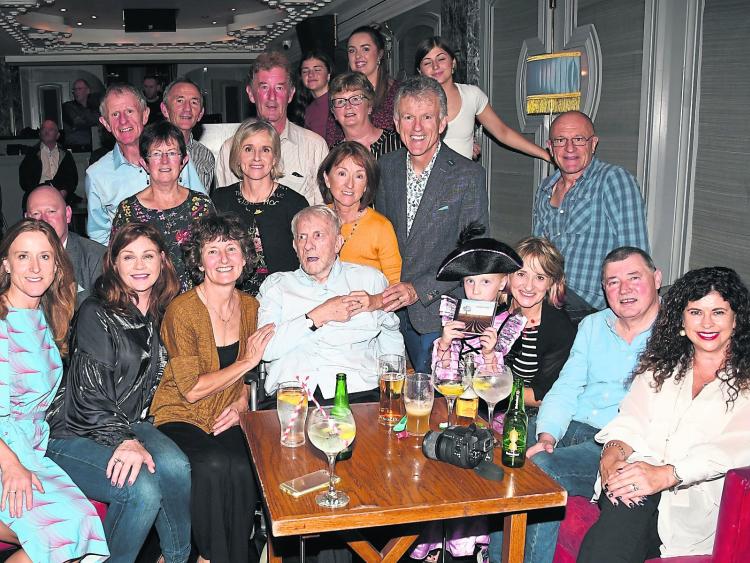 Family and friends with Michael Mogs o'Grady at his CD launch on Friday last in The Set, Kilkenny

The Set Theatre was full on Friday for the launch of a CD celebrating 40 years in music by the legendary and hugely popular Kilkenny city man, Michael Mogs O’Grady who was a founding member of Tweed.
Seed For Every Plough is a collection of songs and tunes that Michael has written and recorded over four decades.
It was a night full of nostalgia as old friends met to recollect on the great times they shared with Michael.
It came about after friends of Michael thought that it might be a good idea to put some of his music on to a CD and present it to him as a gift.
However after much searching they discovered that he had written and recorded a lot more than was first envisaged.
The majority of these were on cassette and demo form and after much debate on which tracks go on the CD 22 numbers were picked out of 60.
They were remastered and put on CD by Brodericks Music Kilkenny.
The treasure trove of music features songs and tunes by Tweed, Reel to Reel, Contraband, Fly by Night as well as Michael himself.
Michael has written and performed in a wide range of musical styles during his career, pop, rock, folk, jazz, trad and these are all represented in this musical celebration.
Unfortunately due to ill health Michael has not able to perform for the last number of years.
Stars who attended and performed at the magical gig and launch included Brendan Ryder and Gay Brazil from Tweed who were on stage as the Backyard Band.
Billy Carrigan and Reel to Reel also played along with Pat Ryan, Bobbie Carey, Rory Broderick, Billy Barron, Willie Maher, John GI Brennan, John Travers and Adrian Jackson.
Michael’s wife, Proinnsiasa thanked the large crowd who attended the launch and said it meant so much to them.
At Michael’s request the proceeds of The CD and the money generated by the launch will be donated to Society of St.Vincent De Paul in Kilkenny.
The CD priced at 10 is available from Broderick’s Music on New Building Lane, off Parliamant Street, the St Vincent de Paul shop on Butts Green and from RollerCoaster records music shop on kieran Street, Kilkenny.