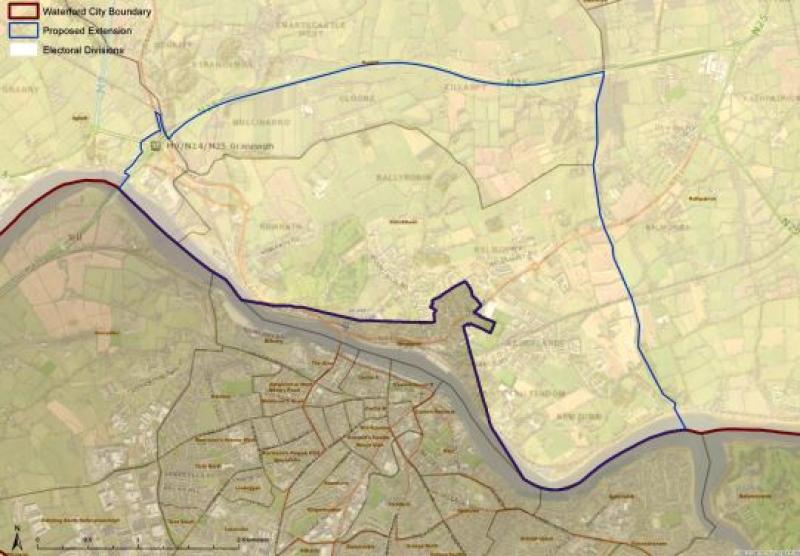 Waterford looks set to revive the controversial debate over its boundary with Kilkenny, with the matter due to be discussed at an upcoming Waterford City and County Council meeting.

Green Party councillor Jody Power has confirmed he intends to bring a notice of motion seeking the implementation of the 2017 Waterford boundary committee’s recommendation that Waterford be extended into South Kilkenny. He says he is expecting support from his Waterford colleagues on the matter at their December plenary council meeting.

Speaking to the Kilkenny People, Cllr Power said a boundary change is vital for not just Waterford, but for the benefit of the wider region. He says planning and urban design experts say it has to happen.

“That’s the bigger picture. It’s not just about a ‘land grab’,” he said. The Waterford councillor believes an extension into Kilkenny is only a matter of time.

Inevitable
“It is inevitable — it is going to happen sooner or later,” he said.

“I believe the sooner it happens the better we can get going. We are on the cusp of something really good here in the South-East here for the benefit of everybody.”

The recent planning approval and then investment announcements for the Waterford North Quays development appear to have been a catalyst for this renewed endeavour. Cllr Power said he expects his notice of motion will be passed, and the council will then seek the establishment of a committee or for Government to progress it.

“It is not a question of us versus Kilkenny, or Kilkenny versus us or anybody else,” he said.

Cllr Power said he had not broached the matter with Kilkenny counterparts, including members of the Piltown Municipal District, which is due to meet tomorrow (Wednesday).

BOUNDARY REVIEW
Previous attempts to move the boundary have met fierce resistance from people living in the affected area and the rest of Kilkenny. The most recent attempt to redraw it saw 20,000 submissions, including vocal opposition from Kilkenny County Council and Kilkenny Chamber, who highlighted numerous concerns.

In 2017, the Waterford Boundary Review committee recommended the boundary be moved. Ultimately, then-Minister for Housing, Planning and Local Government Simon Coveney decided not to implement the recommendation, noting it had caused ‘a lot of concern and unease in the area’.