Fabulous amenity - Graignamanagh's Abbey Hall is ready for the future 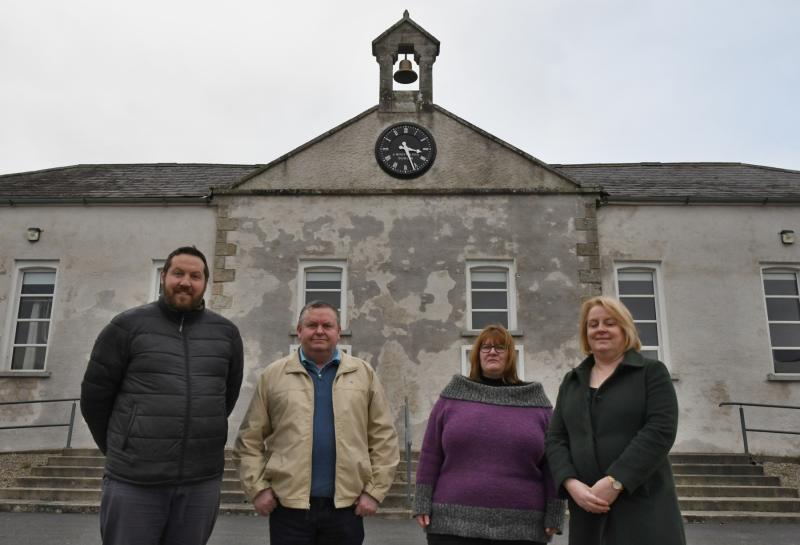 The rejuvenation of a community amenity at the centre of Graignamanagh is set to give a new lease of life to a building that is at least 160 years old.

Abbey Hall was built in 1861 and since then has served local people as a gathering place for reasons as diverse as celebrating mass to training in self-defence.

Now, thanks to the support of local people, Kilkenny County Council and LEADER, the hall, its grounds and the disused public toilets are being transformed into spaces that can be used by the people of Graignamanagh into another century.

Graignamanagh Men’s Shed group is set to become a near-neighbour as it, too, is about to bring a new lease of life to an old building that had seen better days. Renovation and redesign of a disused toilet block has created a new home for the group, again thanks to the support of the County Council and LEADER support and funding.

Both projects are a huge boost to the local community. They are in the final stages of work and will soon open to the public.

Read also: Graignamanagh Men's Shed is bringing life back to an old building in the town

Shared love
The Abbey Hall is not only at the centre of Graignamanagh but also at the heart of the community.
Over the years it has been an integral part of the community providing a space for clubs and youth groups, as well as community events, at minimal cost to the community, as well as being used as a school when first built and at one time used by the church during the Duiske Abbey restoration in the 1970s.

The hall is a ‘shared love’ of all the community and all the committees who have worked away in the background for the last 15 to 20 years to get it back up and running said Ward Kinsella.

A current committee member, Ward has used the hall with a lot of groups as a youngster and helped with activities when his own children joined groups there. Now he is helping to keep it going for future generations.

“The front was a complete eyesore,” he admitted, adding it was important to improve this area as it is a main approach to the town. He appreciates the support of the County Council, LEADER and the local community for the work.

The work carried out on the Abbey Hall took place over three levels, both inside and outside, from the roof right down to the landscaping.
Outside has seen the replacement of the overgrown tennis court with a multi-games 3G sports surface on the lower tier.
The middle outside tier had works to rehabilitate retaining walls, and, along with hard and soft landscaping, new ornate and safety railings were installed and new lighting erected. As part of the project there are new steps and an access ramp from the hall to the court level.

Moving up on to the roof of the Abbey Hall, the Hall clock has been restored and is now back to its former glory. A replacement bell has been installed in the bell tower. The flat roof has been replaced and broken slates remedied. There has been internal repairs to broken structure timbers inside the roof. 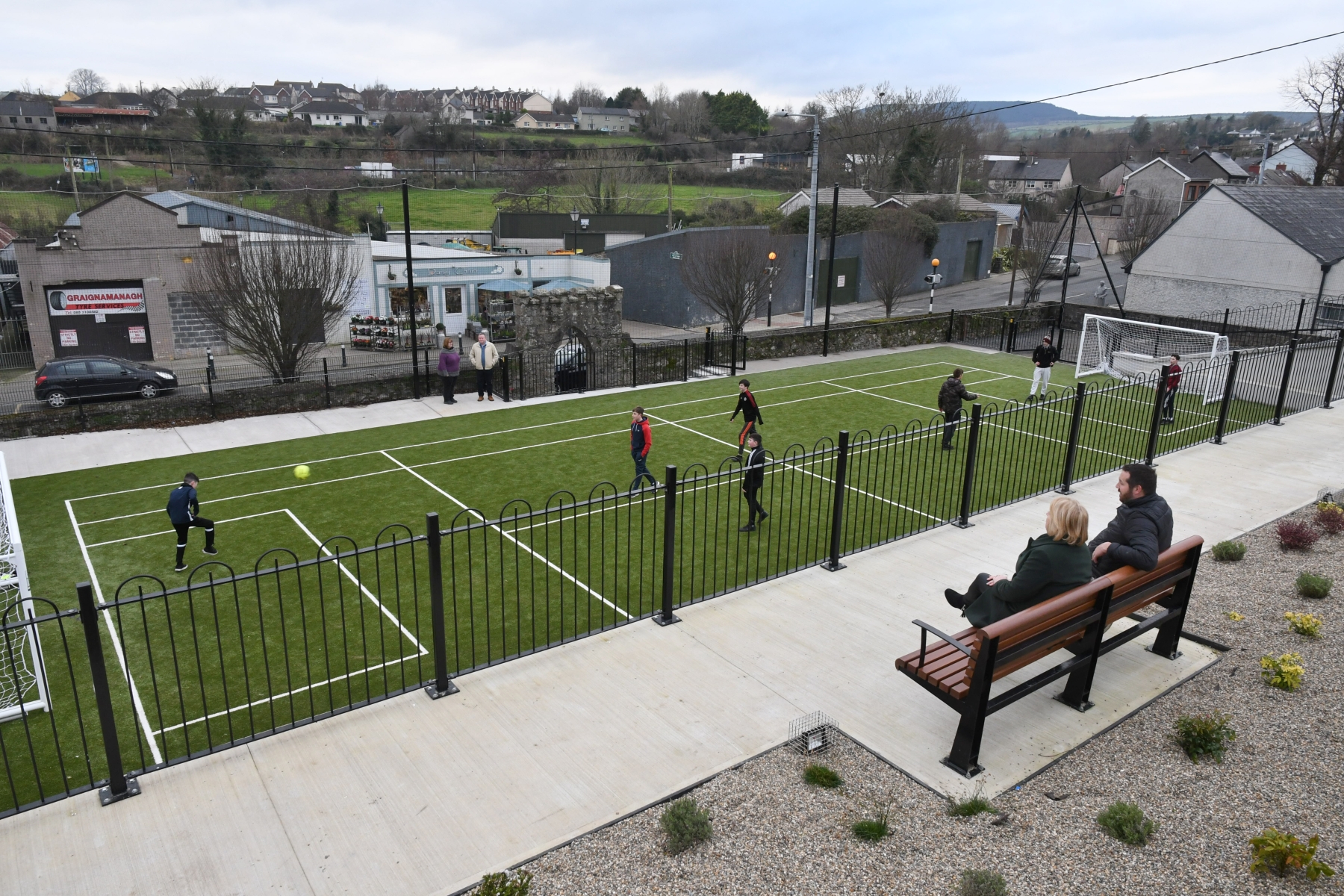 ABOVE: The new playing surface, railings and landscaping at the front of Abbey Hall

BELOW: Before work was carried out 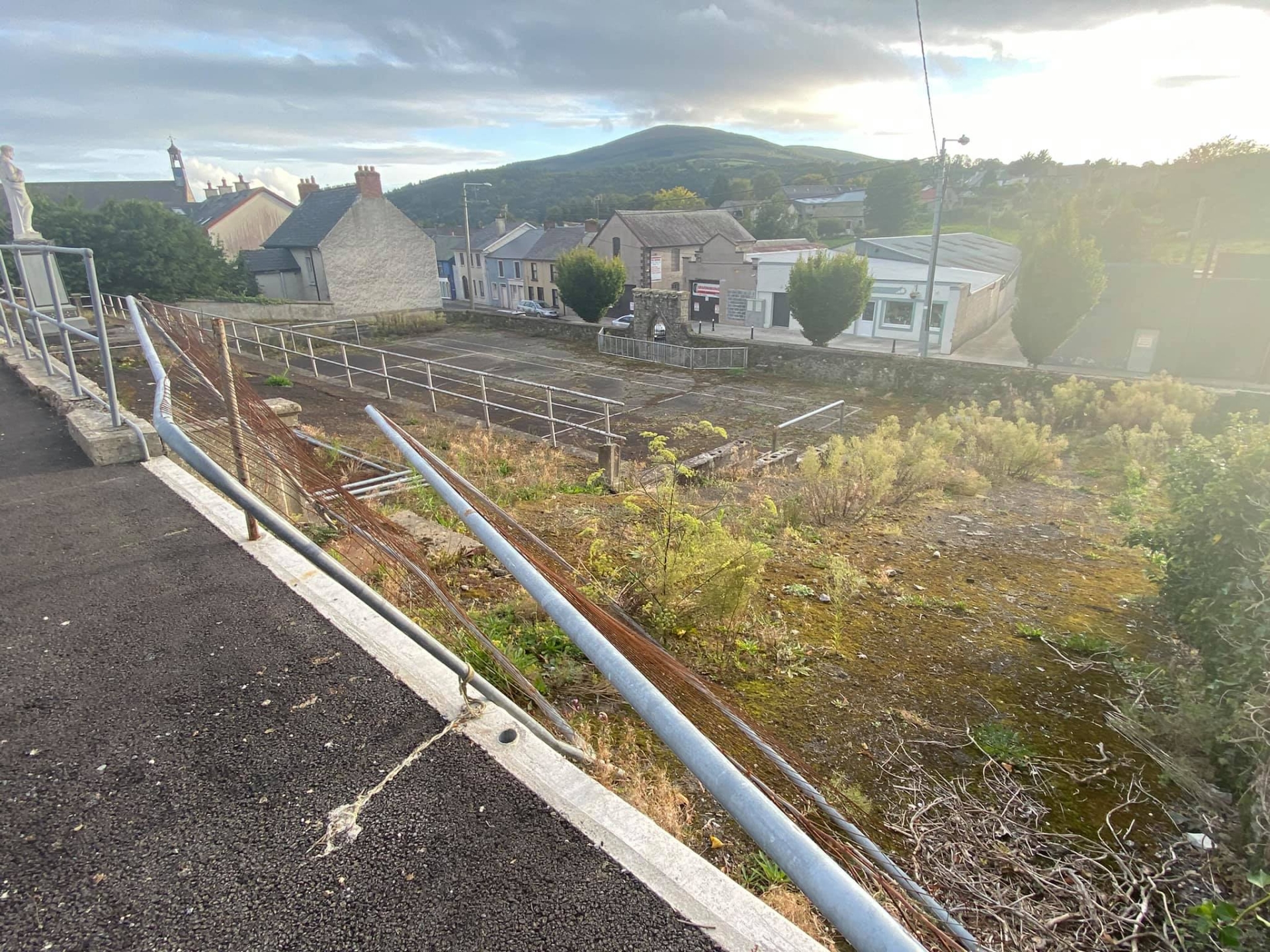 Facade
The outside facade now looks like it did in the 1800s, when the original school opened there.
Inside the hall, the generosity of one of the groups who regularly use the building has made a huge difference. Duiske Players gifted the almost €4,000 cost of installing a proper theatrical curtain tracking system for the stage. This will benefit all who use the stage in the hall into the future.
Before lockdown, and taking social distancing rules into account, about a dozen local groups used the hall - bingo, Irish dancing, Brownies, and the hall is used for gatherings after funerals.
“We want people in there,” said Ward. “It’s a fabulous amenity.”

The last two years have been tough for the hall. Even though activities were severely curtailed bills were still coming in for electricity, water and heating. But costs to groups to use the hall are kept to a minimum.

Abbey Hall is owned by the town, it belongs to the people of Graignamanagh, Ward said. It is run by volunteers and, like them, Ward says he ‘lives and breathes it’. They are supported by a great TÚS caretaker.

There’s a great feeling in the town that this project has been so successful. The Hall was closed by the fire officer 15-odd years ago because the roof was falling in, but now there are just a few jobs left to do, like complete fencing and erect security cameras. “All in all we are nearly ready to go,” said Ward.

This project is being progressed under the LEADER Programme 2014-2020 with match funding from the Council and Community.
As part of the arrangement the council has taken charge of the project design and contract administration and will soon be handing the hall back to the local committee for the use of the people of Graignamanagh.

However, the volunteer committee are still working to raise their share of the renovation costs and funds towards future works.
In non-Covid times they would have organised fundraising events to raise the money. As this has not been possible they have set up an online fundraiser. People who can donate are asked to go to their GoFundMe page at: https://gofund.me/212cc1b6

People have been good to support the online fundraiser. There has also been very generous support from St Canice’s Credit Union and several other local businesses.
Ward promises that every penny will be spent on the hall and not a cent has been wasted. “There’s always something to do, it’s an old building.”
He’s hoping to see even more local people get involved with the Hall when it fully reopens to activities and events.

Benefit to community
Local councillor Peter ‘Chap’ Cleere has said the rejuvenation of this recreational area will be of enormous benefit to all of the local community.
“Massive credit is due to the local Abbey Hall committee for their tireless and trojan work in ensuring this project has been completed for the benefit of everyone in the community, and also to KLP and Kilkenny County Council for their commitment towards this project,” he said.

From this week's Graignamanagh Notes