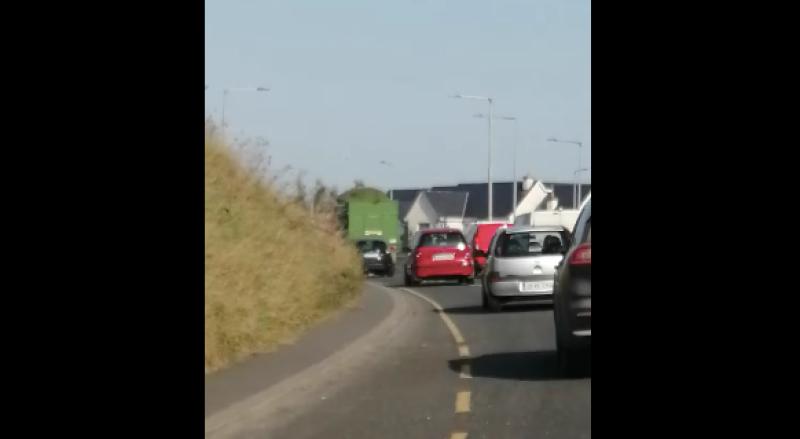 A still from An Garda Síochána Kilkenny/Carlow's video

There are multiple cars in front of the vehicle that the footage is being shot from and, according to gardaí, 'at least 50 vehicles' behind.

Gardaí describe the tractor driver's road etiquette as a 'poor show' because they didn't 'avail of any opportunities to pull in' all the way from Bennettsbridge to Kilkenny (approximately 7km).

Many online commenters condemned the tractor driver's behaviour while others sprang to the driver's defence.

Some commenters stated that there are few (if any) suitable places for pulling in on the road in question and noted that there is a lot of pressure on farmers to make deliveries on time.

Gardaí responded in the comments by showing an area on the road they deemed suitable for pulling in that was not used by the driver.

Here is the full statement from the gardaí on the footage:

"This short clip captured by a passenger in a vehicle travelling from Bennettsbridge to Kilkenny shows a tractor towing a trailer with a queue behind it. There was also a line of at least 50 vehicles behind the one that shot the video. The tractor had travelled the full distance from Bennettsbridge to Kilkenny without availing of any opportunities to pull in. A poor show. Let's all show consideration to each other on our roads."

One user commented: "Two sides to every story. Yes they should have pulled if they had the opportunity but sometimes if you don't know the road well enough you can come on a space to pull in too quick and you miss that opportunity. While tractors may be relatively slow moving they are a large vehicle with a lot of weight in a trailer so it's not always as simple as it may seem. Yes, some drivers can be inconsiderate but not all farmers should be tarred with the one brush."

Here is some advice to road users from a recently issued Road Safety Authority (RSA) appeal referencing the increased numbers of agricultural vehicles using the roads at present:

"If you are travelling behind farm machinery, please be patient and only overtake when it’s safe to do so. Farmers should be aware of traffic building up behind them and keep left where possible and safe to do so to allow other vehicles pass safely."

Let us know what you think.

Gardaí are appealing for witnesses to come forward

Number of PUP recipients in Kilkenny drops again this week