From this week's Tullahought-Windgap Notes 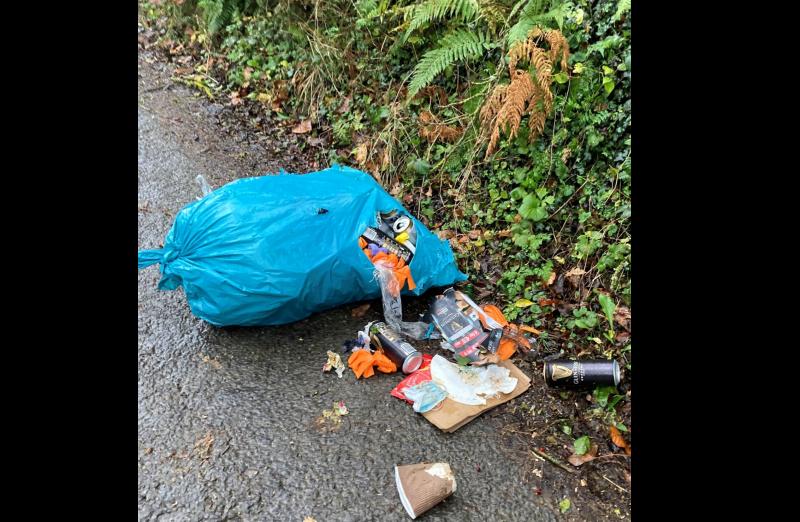 Currently the 'Leave No Trace' of your visit through the countryside is being totally disregarded in South Kilkenny.

The self-explanatory request to leave no rubbish is a NO NO to many visitors as rubbish is being continually dumped along every single roadway.

Recent holiday walks and drives have brought the same observations from many people on the amount of waste being dumped, mostly from the windows of passing vehicles. They included a full pane of glass left neatly in a roadside ditch, a baby's yellow bath, bar stool, old car battery and manure bags along with the new wave of used materials that include face masks, antigen test units and cigarette vape refill bottles. They join the usual cigarette boxes, soft drink bottles, drinks cans, spirit and beer bottles and an array of fast food wrappers.

A special request is being extended to everyone passing through the local Tidy Towns communities of Windgap, Tullahought, Kilmoganny, Dunnamaggin, Kells, Callan, Owning, Ahenny and Faugheen to play to your part in their battle with litter by
bringing it home with you. Míle buíochas roimh ré, Many thanks for your help and assistance in advance

As the New Year commences in a similar way to 2021 with Covid restrictions and litter covered roadways, it is time to reflect on one of the greatest achievements in the past year. It occurred when the community groups from Callan, Coolagh, Windgap, Tullahought, Ahenny, Faugheen and Owning worked together to improve their localities and environment. Between them they de-littered fourteen miles of the Regional road R698 from Callan via Windgap to Owning and another four miles on the Regional Road R697 from Curragawn near Kilmoganny to Faugheen.

By the time they were finished, the main arteries was only a small portion of the de-littered roadways and the many other projects that benefited from their voluntary works.