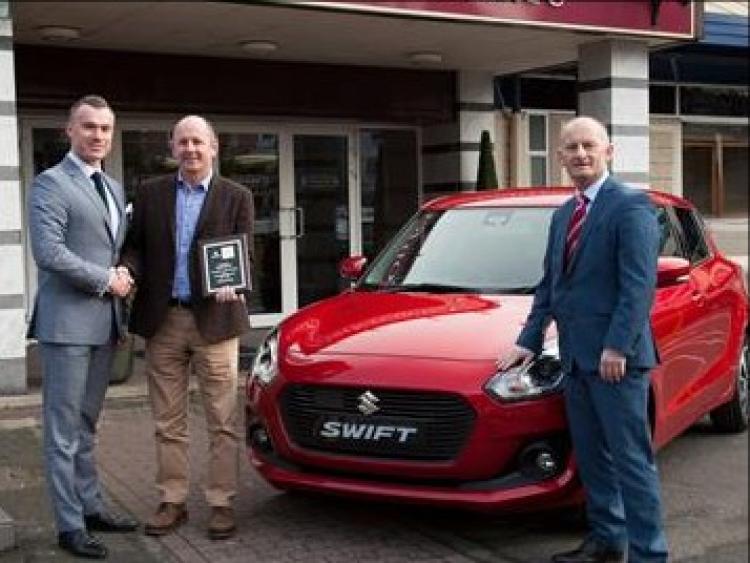 The Kilkenny Suzuki dealership with over 30 years service has been recognised for its long-standing loyalty to the brand.
The Railway Garage, Kilkenny road, Castlecomer, through Dealer Principal, James Farrell has been presented with an award to mark the three decades of dedicated service to Suzuki cars.
Suzuki Ireland recognised three dealers within its network for their contribution and loyalty to the brand at its recent award ceremony at the Ballsbridge Hotel in Dublin.
The Railway Garage started officially with the brand in January 1987. James and his dad, Seamus took the big step and took on the franchise.
Official opening
James actually got five cars to sell through the Suzuki network in 1986 to test the market, and at the start of the following year he officially opened the dealership.
"I would have seen the Suzuki cars at the Motor Show in the RDS in around September 1986," reminded Comer man, James. "What they had on show was a Suzuki Alto and Swift. They took my eye.
"We were talking to them for a little while and then they appointed us a dealer. The rest is history."
The Railway Garage serves all parts of Kilkenny, but also counties Carlow and Laois, who are not served by a local dealer.
Reliability
"Reliability is incredible with Suzukis," James insisted. "That is a big selling point with them. We have no issues with the cars. In terms of reliability they are up there with the top brands."
The specification on the cars were tops too, he insisted, with sat nave, reverse camera and so on as standard.
"With a lot of other brands you are paying extra for a reverse camera and so on. The new Swift and Vitara in particular are very stylish and fresh in terms of looks."
Proud moment
He said it was a proud moment when Suzuki honoured the company for its loyal service. There is only one dealer in Ireland with a longer track record with Suzuki than the Railway Garage. That is City View Wheels in Cork.
"There have been a lot of changes in the business during those 30 years," James suggested. "We are looking forward to taking on the challenges of the future. It is a tough business, but we are happy the product we have to offer is good and strong."
The customer base has swelled over the years, with people coming from far and wide to Castlecomer to buy Suzuki.
Incidentally, Castlecomer is the only town in County Kilkenny with a car dealership. In fact, it has two. Along with the Railway Garage, there is also Quinn Motors, Clogh Road, who serve the Seat and Mitsubishi brands.
Long service
The long service award was presented by David Kateley, General Manager for Sales Operations at Suzuki GB Plc, and Michael McBarron, National Sales Manager for Ireland at Suzuki GB Plc.
Michael McBarron congratulated the recipient of the long service awards for their commitment to Suzuki over the decades.
"The business has delivered exemplary sales performances, and always go the extra mile for customers," he suggested. "We are proud to have them within our network, and we look forward to many more years working with them.”