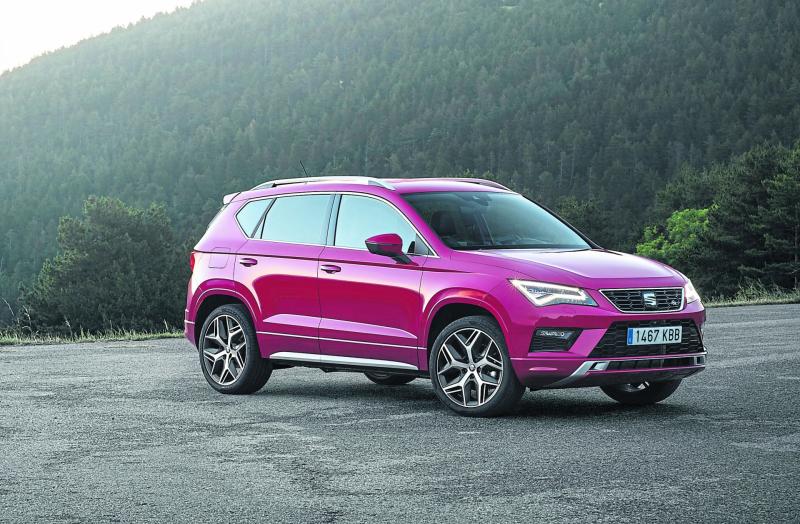 The Arona, SEAT’s second SUV model, and the new Ateca FR, will make their official Irish debuts at the National Ploughing Championships in Screggan, Tullamore.

The all-new Arona sits neatly within the SUV range as the younger brother in the family combining the advantages of compact dimensions with crossover attributes.

The latest addition to the Ateca range, the Ateca FR, has been added to the current Ateca offering that is made up of the S, SE and XCELLENCE.

Situated at the same level as the XCELLENCE, the FR boasts a greater sense of dynamism and sportiness and differentiates itself on the outside by the presence of the FR logo at the front and rear. Its roof rails and window frames also come in black to distinguish itself further.

Upon closer inspection at the front, one can see the grill with its own design in glossy black, as well as the bumpers exclusive to the FR in the same colour as the bodywork at the bottom. Its LED fog lights at the front have also received exclusive FR design treatment. Above all, the FR sets itself apart with its standard 19-inch rims -  the sportiest model in the range also offers the most advanced driving assistance systems and connectivity technology.

Neil Dalton, Head of Marketing and Product at SEAT Ireland said the company was looking forward to showcasing the all-new Arona, a model they believed  motorists across Ireland will instantly love.

"Our display promises something for all car lovers as visitors will also get the chance to see the brand-new SEAT Ateca FR, the recently launched SEAT Ibiza and the upgraded SEAT Leon," he added.

There has never been a better time to purchase a model from the SEAT range thanks to current offers. Available across the 23-strong dealer network, the incentives include an unmissable offer to celebrate the launch of the all-new fifth generation SEAT Ibiza.

The 172 offers also promise a staggering 2.9% PCP finance on the award-winning SEAT Ateca,resulting in monthly repayments of €269. The comprehensive 172 finance offers on SEAT’s first SUV model also include a trade-in bonus of up to €4,000, and a 3-year service plan from €299.

What’s more, for the upgraded new SEAT Leon, a scrappage offer of up to €3,000 is available in addition to a three-year service plan for just €299. 0% finance on selected Leon models means monthly repayments start from as little as €219.

In addition, SEAT has also just announced a free upgrade from the SEAT Leon 5DR to the larger estate model – the SEAT Leon ST worth a staggering €1,000.