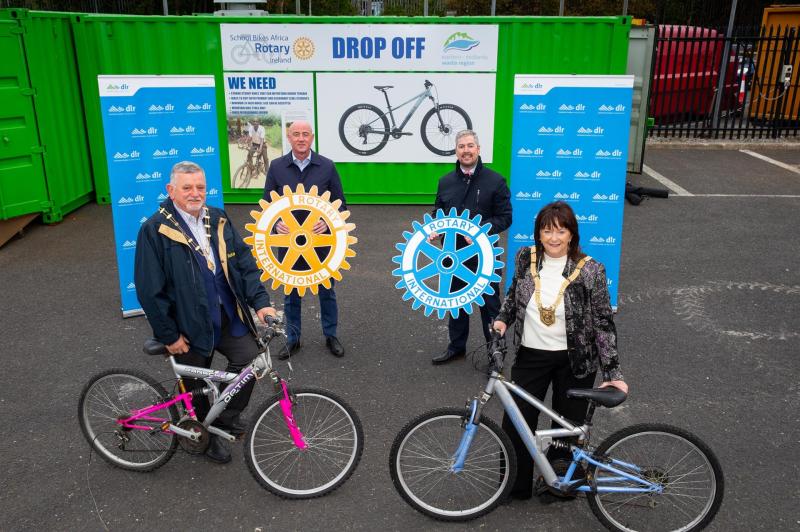 Dún Laoghaire-Rathdown County Council together with Rotary Dublin, Rotary Ireland, The Defence Forces and The Irish Prison Service are appealing for the donation of unwanted bikes for the School Bikes Africa Initiative - a hugely successful project that really took off with Rotary Kilkenny in 2018.

Project has been running nationally lead by Rotary Ireland and with the co-operation and assistance of Local Authorities, the Department of Environment Climate and Communications (DECC), the Defence Forces and the Prison Service. Heading up the project is Jason Dempsey of Rotary Kilkenny, who oversaw the successful launch of the appeal in Kilkenny where there is a collection point at Dunmore Recycling Centre.

Over 5,000 bikes have been collected nationally, then repaired and shipped to countries such as The Gambia where school students use the bikes  to access education. They often travel distances greater than 10 kilometres to get to school.

“Rotary Ireland is delighted to see the launch of the 18th collection centre for School Bikes Africa, and to welcome Dún Laoghaire-Rathdown County Council to the team. Together we can both improve the environment and enrich lives,” said David Murray District Governor of Rotary.

If you have a bike to donate please take note of the following requirements:

An Cathaoirleach of Dún Laoghaire-Rathdown County Council Cllr. Lettie McCarthy, launching the project there, said: “Dún Laoghaire-Rathdown County Council are delighted to be part of the School Bikes for Africa Scheme. This initiative not only demonstrates how we can encourage, reuse and repair to support the circular economy but ensures unwanted bikes are put to a worthy cause by providing children in Africa a better chance of accessing education. I would encourage everyone to consider donating any unwanted bikes to this worthy cause.”

Jason Dempsey of Rotary Ireland summed it up in saying: “The School Bikes Africa Initiative is a Win, Win, Win: a Win for climate change given the benefits of repair and reuse as well as promoting sustainable transport; A Win for prison inmates providing opportunities for training and rehabilitation and a Win for School Students in Africa in providing a better chance for availing of education”.