In the summer of 2010 a family from Castlecomer went to Tralee on holiday. With her aunty and cousins, eight-year-old Molly Coogan watched as the beautiful Roses paraded through the town as part of the Rose Festival, and got all their autographs.

Fast forward to the summer of 2022 and Molly is now the Kilkenny Rose and will be signing autographs for other little girls when she takes part in the festival this week.
“I’ll be doing that now!” Molly said with a mixture of excitement, anticipation and nerves, as she enjoyed her last quiet day in Castlecomer before joining the around-Ireland Rose Tour.

Scroll down to read about Molly's preparation for the Rose of Tralee and click 'NEXT' for more photos of her journey! 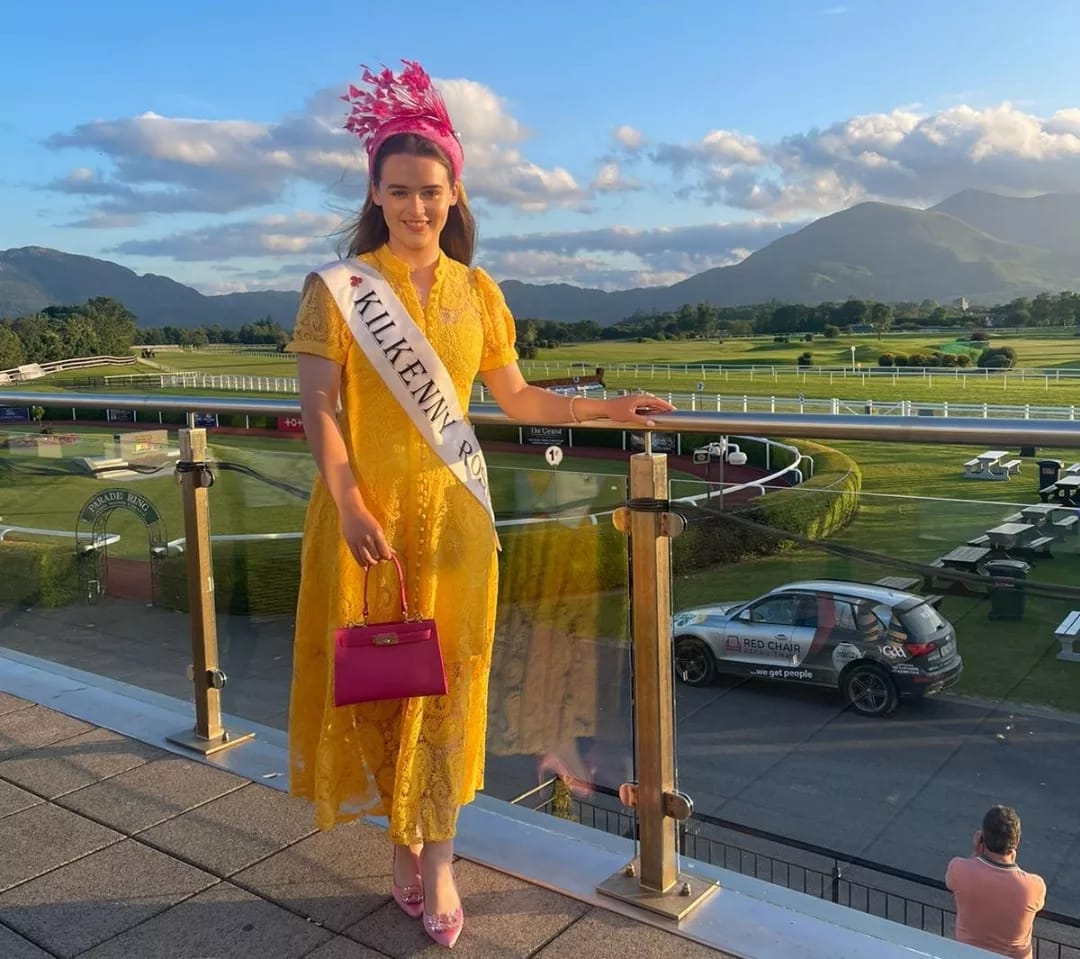 ABOVE: At the Killarney Races

The Irish Roses met up with the Roses from international centres for the first time in Wexford, last Thursday. It was the start of an exciting week for Molly that will culminate in her appearance on stage at the Dome in Tralee, and on our televisions, this week.

Like most Irish people, Molly watched the Rose of Tralee on television every year, admiring the lovely dresses and trying to predict who would win.
The international festival was cancelled for two years because of Covid, but earlier this year entries reopened.

In Castlecomer it was Anne Coogan who spotted the news in the Kilkenny People and encouraged her daughter Molly to enter.
A busy student in UCD, where she’s studying business and law, Molly is also involved with several groups in Castlecomer and was at first reluctant to enter. But is now delighted she did.

“My mam is loving it,” she said. She was Molly’s right-hand-woman in the preparations for 12-day Rose Tour. “She’s having a lot of fun with it, like my personal assistant and doing a lot of work. I don’t know what I’d do without her!” Molly said.
Following her selection as the Kilkenny Rose, Molly and Anne have spent lots of time at Catwalk boutique on Rose Inn Street, putting together outfits and accessories for all the official events on the busy Rose schedule.

Molly attended events in the run up to the festival to get to know her fellow Irish Roses.
The Rose Tour started on August 11 and continues to August 23 — she’ll need at least two outfits a day, day and evening, and four ball gowns, along with accessories, shoes and jewellery. Molly appreciated the professional style advice from Catwalk and how they combined it with her own style.

Molly said she was completely shocked when chosen as the Kilkenny Rose and it took a few days to sink in. She was taken aback by the amount of wellwishers, people dropping cards and flowers to her house to congratulate her.

Molly’s very first event as a Rose candidate was an outing to Castlecomer Discovery Park, which was a funny coincidence because that’s where she works! There were trips to the races and afternoon tea in the Ormonde Hotel in Kilkenny as part of the Kilkenny Rose selection, with local organiser Lyn Moloney and the other ladies.
The activities have continued since Molly’s selection, with days at the races with other Roses. She has also been out and about locally, visiting Castlecomer Day Care Centre. 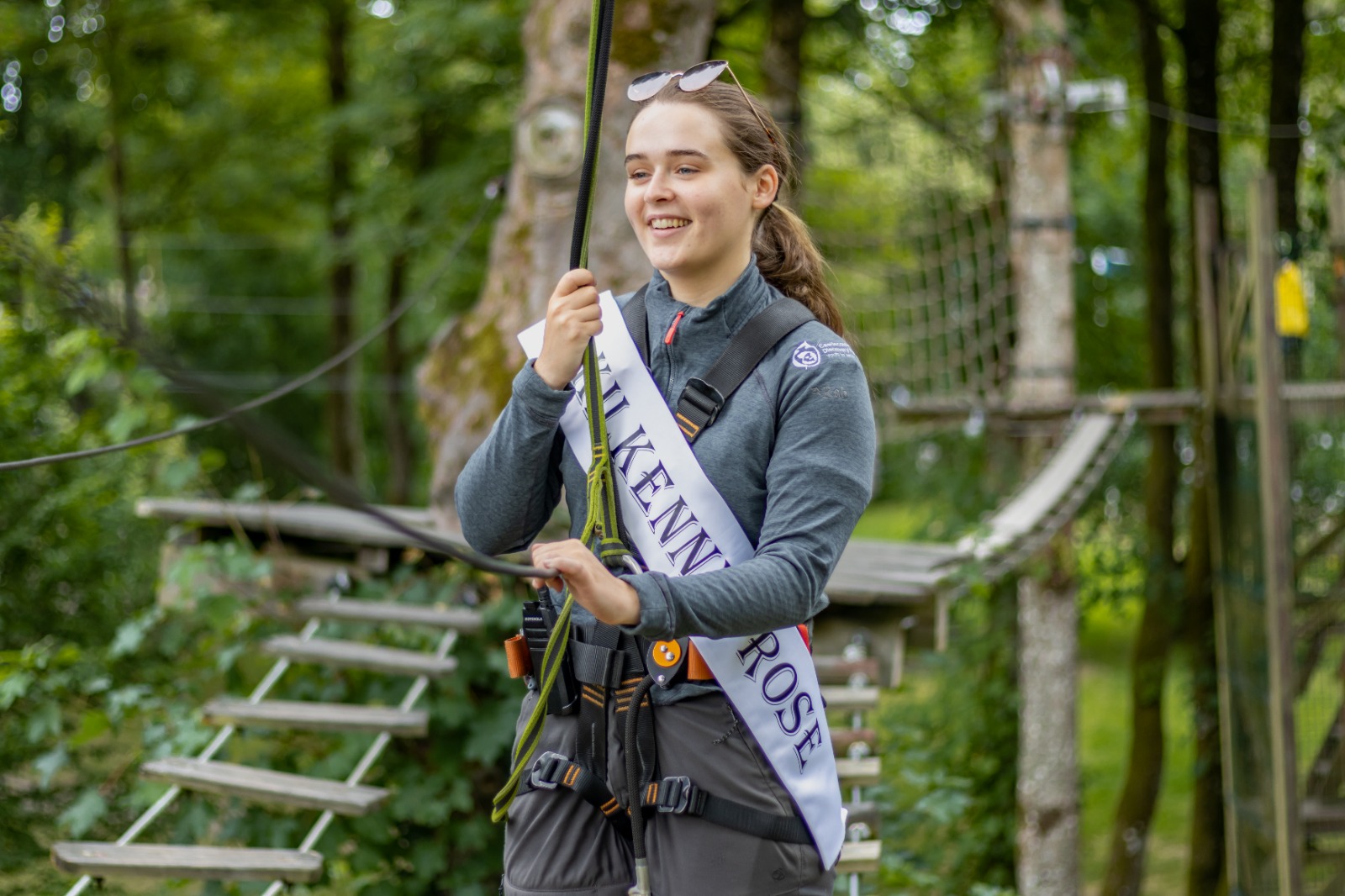 ABOVE: Molly enjoying her day out at Castlecomer Discovery Park with the other Roses!

Rose Tour
As part of the Rose Tour she will be visiting Wexford, Kildare, Tipperary, Leitrim, Limerick and Cork, with a gala dinner mid-week at Barberstown Castle that Molly will attend with her family.
The Friday before she left for the Rose Tour Molly had a celebration night at the Avalon Hotel in Castlecomer. It was a chance for everyone to wish her luck, but also for Molly to thank everyone who has supported her, including the Avalon Hotel, Willie Ford in Eurospar, the Discovery Park, Joe Coogan and the Credit Union. She said it was a real community evening.

Audiences in Kilkenny won’t know what night Molly is scheduled to appear on stage with Daithí O Sé until later in the week, but in the meantime she will be getting to know all the other Roses. She has already been to meet Daithí, with some of the Irish Roses.
“Everyone is so different but perfect for the role they do,” Molly said of the Roses she has already met and those she has chatted to on the Roses’ WhatsApp group.

Support from family and friends in the audience is as much a part of the tv show as the Roses appearing on stage, and Molly won’t be lacking for cheers and banners when it comes to her turn. Her family, mam Anne, dad Tom, extended family, cousins, friends from Castlecomer Panto and college are all planning to go along.

While the escorts have been selected, and attended their ‘bootcamp’, the Roses won’t know who has been assigned to them until they get to Tralee. We also won’t know if Molly will be doing a ‘party piece’ on stage until later in the week, with everything coming down to television timing. For the Kilkenny Rose selection Molly sang and she hopes to do so again on stage in Tralee.

RTE Broadcast
The Rose Ball takes place on Friday, with the parade of Roses through Tralee on Saturday.
On Sunday the Roses will have a ‘pub twinning’ where each Rose is allocated a pub where they can meet family and friends.
The television interviews will be broadcast on RTE Monday and Tuesday. Keep an eye on KilkennyLive.ie to find out what night Molly will be on television!