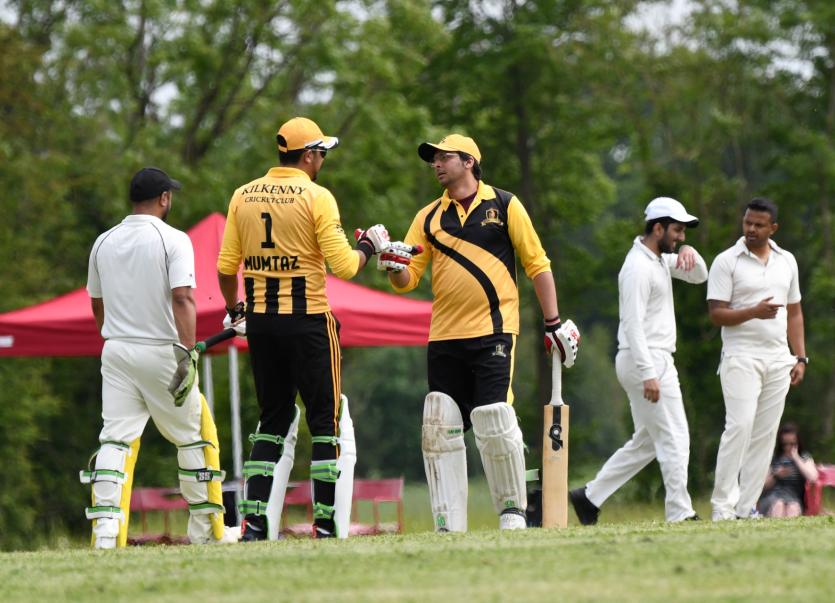 Kilkenny Cricket Club in action - in the black and amber!

It has taken a long time, but the county which was once leading the way for cricket in Ireland is making a comeback at the top of competitive leagues.

They say Kilkenny’s strength in the hurling milieu was foreshadowed by the county’s strength as a cricket county, before the advent of the GAA, and the game also enjoyed popularity in the 50s.

History looks set to repeat itself, as today Kilkenny Cricket Club is right back up there at the top of competitive leagues, again.

This success is coming from a rural base, just outside the city, where the fledgling Kilkenny Cricket Club makes its home at Castle Blunden.

Over the past weekend two teams took to the field of play, with both winning. A great performance saw the Firsts top their league and claim a place in the semi-finals of the Ed Sports Whelan T20 Cup, while the Club’s Seconds are on track to top their league and also claim a semi-final spot, in the Adamstown Cup.

It was a chance meeting at Castle Blunden that led to the new club being set up, a few years ago.
Patrick Blunden, who lives at Castle Blunden with his wife and young family, had embarked on some renovations at the historic house. One of the men who worked on the project had a son who was playing cricket with a club in Bagenalstown. He suggested Kilkenny set up a club and Castle Blunden would be a great place for it.

Patrick thought about it for a while, then a meeting was called at the Club House Hotel, to gauge interest.
About 20 people turned up, he remembers, much less than the crowd attending another sporting AGM at the same venue, but it was enough to go ahead and set up the club.

The new Kilkenny Cricket Club held its first match in 2018. The following year the club established its first team playing ‘friendly cricket’ against teams from Dublin, Limerick and other Munster teams, and ‘all sorts of places’.

Last year was meant to be the club’s main launch season. But then along came Covid-19 and the season was truncated.
Still, as word of the club spread it attracted new members, and they did well. Many people who have moved to Kilkenny for work and came from communities where cricket is a major game were delighted to get involved. The new club also attracted some people who lived in the area but had been travelling to clubs much further away to play the game.

With about 25 registered members at the end of its first year, all men, the club hoped to grow its female and underage membership, when it could. Patrick hopes to be able to issue an open invitation to an event where anyone can give cricket a go. Just not yet. Even though the club hasn’t been able to hold a public game and recruitment/demonstration day this year because of ongoing social distancing restrictions, membership continues to grow - with 80 registered members this year.
The membership is made up of about 50 adults, men and a small number of women, with the rest children.

Patrick’s grandfather, Sir William Blunden, played cricket with clubs in Gowran and later Mount Juliet, which still has a club, when he returned from the navy in World War II. “My grandfather was a huge cricket fan and I’ve done something here in memory of him,” he said.
As part of this, Patrick’s mother has offered some financial support for the development of the club, which will be essential to match any grant aid the club is awarded.

Kilkenny has the support of Cricket Leinster, who are doing their bit to promote the club this year.
Midlands Development Officer for Cricket Leinster, Bernard O’Mara, has been visiting local schools, in recent months, to introduce the game. There was a warm welcome for the ‘new’ sport at KSP and the Model School and youth membership with Cricket Leinster has jumped in Kilkenny CC, from one underage player in 2020 to now more than 40 youth players in 2021.
“We’ve had fantastic success in schools,” Bernard told the Kilkenny People, and he hopes to work with some local secondary schools next term.

Cricket had an advantage in the last year or two as the cricket season was on when Covid numbers were low and it was less affected than some other activities. The hand-eye co-ordination skills used playing cricket are also transferable to playing hurling.

The early success of Kilkenny Cricket Club is great, Bernard said, but it’s important to invest in building the youth membership to ensure a strong future for the club.

Kilkenny has made a fantastic start, he said, adding that the club is fortunate to have a number of surrounding clubs with a good youth structure so the kids’ teams can have fun playing each other. Bagenalstown, Carlow and Laois all have underage teams.

Cricket Ireland are also supporting Kilkenny, helping to advertise in this paper for the ‘Smash It’ summer camp taking place for five to nine year olds, this week.

Patrick says that the club is really encouraging children and definitely trying to get women involved in the club, as it grows. Girls dropping out of sports in their teenage years is an issue getting growing attention in Ireland.

Patrick, who has a six year-old daughter who has already started to play, is conscious of this and says cricket is an ideal sport for people of all ages and genders.

With an emphasis on the skills involved in the game, timing and technique, and not speed or strength, it’s not unusual to find up to three generations of the same family on a cricket team without any issues - a teenager, his father and his grandfather!
Patrick’s own grandfather loved cricket and played into his 60s. Kilkenny has 13/14 year olds playing on the men’s team and they can hold their own.

Kilkenny CC now has a ladies team, who play social cricket, while two men’s teams play in Division Nine and Division 17.
The club is really pleased with how well they are doing.

An interesting feature of the Kilkenny Cricket Club is its multinational membership. Many of those getting involved have moved to Kilkenny from countries like the UK, India, Pakistan, Bangladesh, Sri Lanka and South Africa - communities where cricket is a very popular sport. In Ireland cricket is a sport that integrates many communities, and new communities with local Irish people. Sport is a great way to integrate and find out what other communities are all about.

Cricket can be a time consuming sport - a day out for spectators but also a time commitment for those taking part. Many away games also mean people need to have transport. Currently when Kilkenny travel to a game they take 11 players and someone to keep score. The game also involves two umpires (referees).

Most games played by Kilkenny are T20 format - that is they field and bowl for 20 overs. These games can take three to four hours. Another game format involves 35/40 overs and can take up to seven hours.
To the uninitiated it may seem like the rules are complicated, but these are all explained to new members.

Training takes place on Tuesdays and Thursdays, from 6.30 to 9.30pm, light allowing. There is a ‘small practice’ on a Wednesday afternoon, and formal games take place most weekends for the adult teams.

Training for children is held on Friday evening and ladies have their own training schedule aswell.
Kilkenny Cricket Club has big plans for the future.

At the moment they have a playing field in a beautiful setting on the lands of Castle Blunden. Two artificial wickets and an all-weather crease have been installed in the middle of the field, and practice nets have been put up nearby. It’s the basic equipment the club needs and to convert the site into a proper cricket ground it needs a lot more - the club has applied to the Community Enhancement Programme for funding to install a scoring booth and shed, a proper lawn mower and roller, and a defibrillator.

At the moment the club is using pop up tents on game day but they hope to be able to construct a clubhouse/ pavilion someday.

“We have the basics all done. The ground is not ideal and we would like to do some work on that.
“The wicket is the main thing and that is very good, and we have nets,” Patrick said.

Bag of chips please - and a city apartment to go!

John Street's famed Blue Door take away is up for sale

Local Samaritans to walk the waterways from Carlow to Kilkenny - please support!