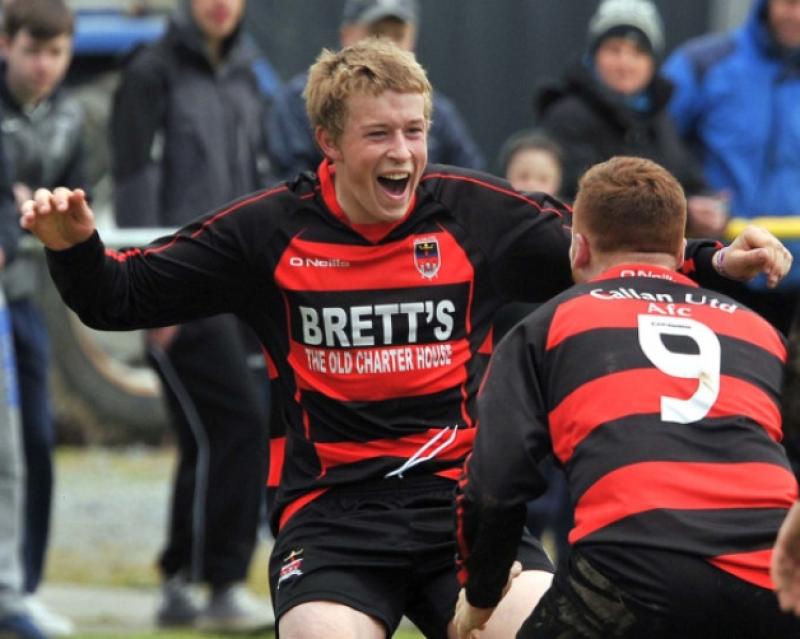 The love story between Callan United and the McCalmont Cup has room for one more chapter.

The love story between Callan United and the McCalmont Cup has room for one more chapter.

Winners in 2012 and semi-finalists last season, United booked their second final appearance in three years as a late goal charge took them past Thomastown United A at Derdimus on Sunday.

Young midfielder Ryan Bergin had Callan dreaming of a May 25 final in Derdimus when, with 85 minutes on the clock, he broke the deadlock.

Robbie Wall was the creator, driving a teasing diagonal free in from the left flank. The ball bounced in front of Simon Burke who, spotting the in-rushing Bergin, flicked a clever header over the last defender and into his colleague’s path.

The ball fell perfectly for Bergin, who showed a cool head to race on and stroke a sweet shot inside Rory Leadbetter’s left hand post.

The Callan celebrations were long and loud - but Thomastown felt they should have cut the cheers short a few minutes later.

With time almost up, Thomastown felt they were denied a clear penalty when sub Marty Lawrence poked the ball past netminder Owen Wall, but went down under a combined challenge from defender J.P. Corcoran and Wall.

Failing to get the spot-kick affected Thomastown, who lost their focus in stoppage time - not so Callan.

With time almost up, one last attack sealed their final berth. Lee Delaney and John Mark Egan did the legwork, the latter unselfishly squaring the ball to Simon Burke, who tucked it away from close range.

It was a dramatic ending to what had been a solid contest between two good passing sides. Callan had the first pot at the target, but Rory Leadbetter did well to tip Ryan Bergin’s seventh minute shot round the post.

The sides kept looking for a breakthrough. Thomastown showed great composure as they worked the ball around the back four, searching for a gap to exploit, while a Callan side spurred on by the industrious Robbie O’Brien and John Mark Egan tried to make the pace of Robbie Wall and Simon Burke count in attack.

It was an unlikely source who almost grabbed the opener. Derek Brennan went within a whisker of scoring when he got a glancing header on the end of Kelvyn Skehan’s dangerous 30th minute free-kick, but Owen Wall spread himself to make the block.

The danger wasn’t over. The impressive Danny Monks worked the ball back in to Dessie Walsh, who tried to pick out Brennan with a deft header, but Wall got to the ball first.

Callan were roused into action and promptly returned the favour. A foul on Burke on the edge of the box - he must have been but a few blades of grass away from the white line - provided Callan with a chance to hit back. Burke took the close-range free, fizzing it past the wall, but Leadbetter got his finger-tips to the ball to help it over the bar.

The pace of the game dipped in the early stages of the second half, but Callan looked the livelier side when play picked up again. They had a great chance to nick the lead when they caught Thomastown cold on the counter-attack. Burke and Wall snapping up a clearance from a Town corner and racing away.

Linking up on a swift one-two with Wall, Burke broke into the box. However, he took the ball too far wide in his attempt to round Leadbetter, giving Eoin Manning time to get back and help his netminder block the ball to safety.

Thomastown had dropped out of the game for a spell, but felt they should have taken the lead when sub Marty Lawrence clashed with Kevin Fitzpatrick on the edge of the box. The penalty appeals went up, but nothing was given.

Callan seized on the confusion shown by their opponents. Breaking away, Wall and Burke led the charge and teed up Delaney, but Leadbetter tipped his 64th minute shot over.

The momentum seemed to be with Callan at that stage, as they proved when Bergin finally broke the deadlock. Minutes later, the Division One champions were dreaming of another piece of silverware to add to the trophy cabinet.