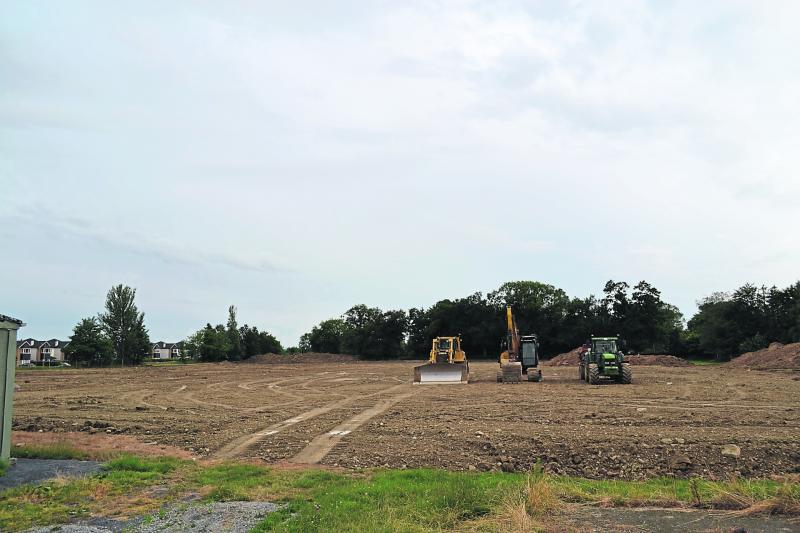 Machinery in place at the Fair Green in Callan, where development works are ongoing to provide new pitches for Callan United

It’s been a long time in coming, but some of the best soccer pitches in Ireland are being installed in Callan.

The Fair Green home of Callan United AFC has been a hive of activity this summer - but it wasn’t the usual boys, girls and adults kicking a ball, it was heavy machinery and skilled groundworkers.

Months of work have already taken place, with several more months to wait before the new pitches are playable, but it’s a relatively short time to wait compared to the 10 or 11 years the club has been planning this development.

The new pitches were a necessity. In winter they would get waterlogged and most weekends were unplayable. It was estimated they would be completely ruined within three years.

Pictures: From this week's Callan Notes

Club chairman, Rob Higton, says hundreds of club members and many previous committees have played their part over the years. It’s also thanks to the support of the local community that these top-class pitches can be developed. Fundraising for the project began with the club’s Lipsync event a few years ago, but recently Covid has put a stop to events that were planned to raise money to pay for the pitches. The club had hoped to hold a ‘Cube’ event, but it has been postponed until restrictions are eased.

In the meantime the club have appealed to supporters, former players and the local community to support them. Callan United set up a Go Fund Me page (https://bit.ly/3swQRC1) and, in the first day alone, raised €1,200 towards the development. It was a generous start, but the call needs to go out far and wide - because the total cost of the project is about €170,000. And help is still needed.
Thanks to a Sports Capital Grant of €98,000 the project was able to get off the ground. Early fundraising also helped, but the club is still looking at a funding shortfall of about €38,000. The club has been approved for a bank loan to cover this cost but they would like to limit what they have to borrow. This is because the club has further plans when the pitch is completed - they want to put in new dressing rooms for players, especially now there are more girls playing soccer.

Rob says the club wants to be part of the community, not a drain on it. In the future they plan to not only promote themselves, but in partnership with local organisations and businesses promote all that's good about Callan.

For those watching the development and looking forward to playing on the new pitches, it will be next spring before they are ready. In the meantime the development is being overseen by an international expert. Richard Hayden is from Graignamanagh but he is also the ‘top man’ in the world when it comes to playing pitches. He is known for looking after the Aviva Stadium pitch, as well as working on the pitches for the World Cup in South Africa and the European Championships in Russia and Ukraine. He was also involved in this year’s Euros and is delighted to be involved in a project so close to home.

This project is not just about putting in drainage pipes — there’s a science to it: “At the end of the day, these will be two of the best pitches in Kilkenny, if not the whole of Ireland,” Rob said.

Last chance to include your Callan CBS memories in new book