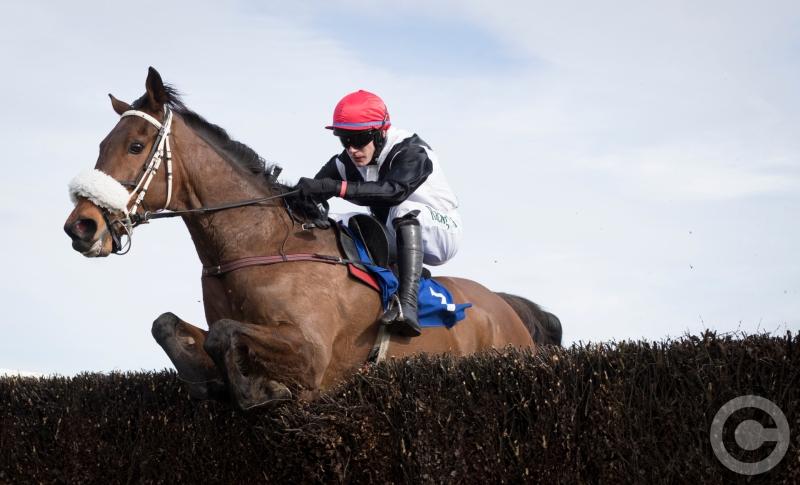 High-flying Rachael Blackmore was one of three conditional riders who got on the mark at Gowran Park on Saturday.

Lachare’s task was made all the easier by the exit of 4/5 favourite Chirico Vallis, who ran out through the wing at the second hurdle.

Ted and Katie Walsh won the Tetratema Cup Hunters Chase with 1/6 favourite Foxrock, while the gambled-on Ministerforsport took the bumper at odds of 2/1 for Cork trainer Terence O’Brien and Pat Collins.

Ellmarie Holden and Rachael Blackmore recorded by far the biggest success of their careers when combining to win the Download The Ladbrokes Exchange App Leinster National Handicap Chase with Abolitionist at Naas on Sunday.

The 12/1 chance came from off the pace to land the €59,000 first prize on his first start since chasing home Empire Of Dirt in the Troytown Chase at Navan in November.

Gigginstown House Stud were responsible for all four runners in the Grade Three novice chase and punters who sided with the leading owners’ retained jockey Bryan Cooper were on a winner as 2/1 favourite Ball D’Arc raced clear from the final fence to score for Gordon Elliott.

Willie Mullins won the opening two races on the card with the Paul Townend-ridden 5/2 joint-favourite Bleu Berry just getting the better of Joseph O’Brien’s Outspoken in the listed novice hurdle and 1/5 favourite Townshend running away with the beginners’ chase under Patrick Mullins.

The father and son team of Eamonn and Eoin O’Connell denied the champion trainer a treble and the champion amateur a second winner when 20/1 outsider Bluegrass Princess easily outpointed 1/2 favourite Mystic Theatre in the bumper.

Eoin Griffin saddled his first winner in 13 months when the Jody McGarvey-ridden Rathpatrick took the 2m3f handicap hurdle. Owner JP McManus got a second winner when Donagh Meyler just got the Robert Tyner-trained 4/5 favourite Never Off Duty home by a neck in the opportunity maiden hurdle.

Shane Foley made his first visit of the year to Dundalk one to remember when he rode two winners at the Louth venue on Friday night.

Based in Japan for the past two months, Foley hadn’t ridden in Ireland since before Christmas and won the second division of the 6f handicap on the Adrian Joyce-trained Ken’s Sam, the 6/1 chance only getting into the race as the second reserve.

The Kilkenny native then teamed up with Michael Halford to win the 1m maiden on 4/6 favourite Allography. Only Pat Smullen has ridden more winners on the all-weather than Foley and he too weighed in with a double.

The champion jockey won the claiming maiden on the Patrick Prendergast-trained 11/8 favourite Hailstone and took the 1m conditions’ event on 5/4 favourite Another Story who is trained in Summerhill by Sheila Lavery.

Oisin Orr completed the second double of his career when landing the apprentice handicap on the Paul Flynn-trained 3/1 chance Try Again and the rated race on 10/1 shot Specific Gravity, trained by Ado McGuinness.

Kevin Manning brought his tally on the all-weather to 99 winners when successful on the Johnny Feane-trained 7/2 joint-favourite Strategic Heights in the 6f handicap. Gary Halpin partnered the final winner of the night in the shape of Free State, who won the 12f handicap at odds of 4/1 in convincing fashion for Denis Hogan.

Cousins Emmet and Patrick Mullins teamed up to land their third success together when newcomer As You Were won the bumper at Thurles on Thursday.

The well-supported 4/1 chance raced clear from over a furlong out and came home a 16 length winner under the champion amateur.

Adrian Maguire took the opening beginners’ chase with the Paul Townend-ridden 15/8 favourite Knockraha Pylon, but the pair were out of luck in the subsequent rated chase when 7/2 favourite Knockraha Boss lost out to 4/1 shot Boher Call who was ridden for Longford trainer Paul Flynn by Barry Browne.

Noel Meade and Sean Flanagan took the honours in the 2m maiden hurdle when the gambled-on 7/4 favourite Aint Dunne Yet won in great style. Another Wexford jockey, J.J. Slevin paid a visit to the winners enclosure 35 minutes later after he partnered 12/1 chance Coole Craft to victory for Cleariestown trainer Jonathan Fogarty.

There was further Wexford success when Sue Bramall, who trains in Enniscorthy, teamed up with Andrew Ring to win the 2m7f handicap hurdle with Diamond Cauchois, a 12/1 shot.

Thurles trainer John Nicholson and Mark Enright won the maiden hurdle over the same distance with Ask Susan who was returned at odds of 10/1.

A total of 124 horses, an increase of 34 on last year, have been entered for the €500,000 BoyleSports Irish Grand National at Fairyhouse on Easter Monday, April 17.

Now the most valuable National Hunt race in Ireland, the entries for the BoyleSports Irish Grand National are dominated by Gordon Elliott. The season’s leading trainer has put 28 horses, by far the most of any trainer, in the race and he is responsible for the early top-weight Outlander.

A top contender for the Cheltenham Gold Cup, Outlander has been handed 11st 10lbs while his stable companion Empire Of Dirt is next on the list with 11st 8lbs. All three horses are owned by Gigginstown House Stud who have won the race for the past two years.

Elliott has also entered last year’s runner-up, Bless The Wings who has been given 9st 11lbs while Noble Endeavor, a 10/1 co-favourite is on 11st.

The BoyleSports Irish Grand National will go a long way towards deciding who is crowned this season’s champion National Hunt trainer. Elliott has yet to win the race and the same can be said of the current champion trainer, Willie Mullins who has made 14 entries, headed by Alelchi Inois on 11st 5lbs.

His leading novice chaser Bellshill has been given 10st 9lbs while early 10/1 co-favourite The Crafty Butcher is on 9st 9lbs.

Mullins has also entered his recent Fairyhouse winner Pleasant Company on 10st 8lbs. Pleasant Company beat 2015 BoyleSports Irish Grand National winner Thunder And Roses to win the Grade Three At The Races Bobbyjo Chase at the course at the end of last month.

A capital development grant aid of €24,920 towards a €62,300 redevelopment of facilities for stable staff at Gowran Park racecourse has been approved by the Board of Horse Racing Ireland.

The stable canteen is being expanded and refurbished and the enhanced facilities will be fully operational in time for the track’s April 30 fixture.

All 26 racecourses in Ireland were eligible to apply for funding under this scheme with HRI providing 40% of the cost of approved projects.