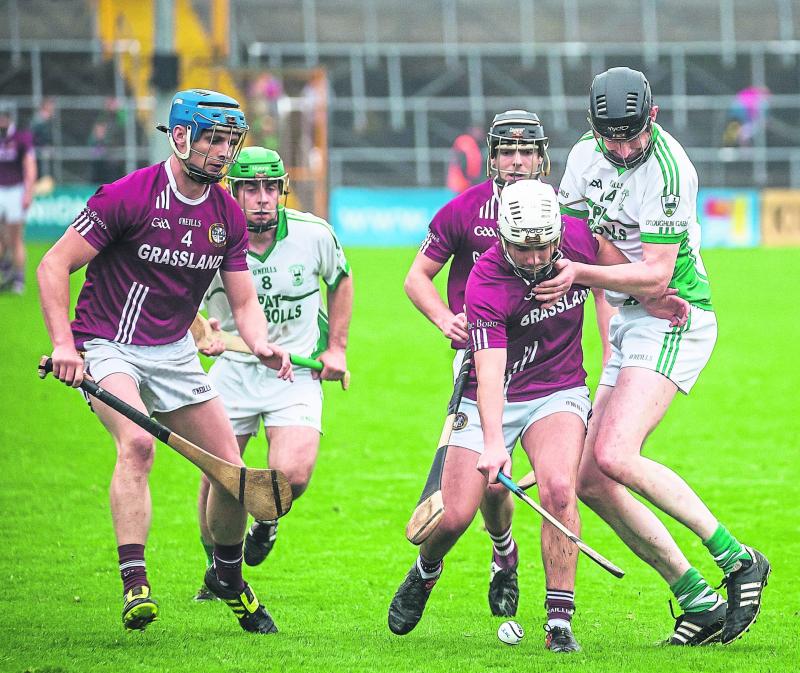 Dicksboro maintained their drive for a Kilkenny senior hurling league/championship double when they unseated champions, O'Loughlin Gaels in a tight and tense semi-final in Nowlan Park today.
The champions did everything to save their title, and in one last frantic attack in the 64th minute 28 of the players populated the 'Boro goal area as they sought an equalising goal as goalie Stephen Murphy stood over a free on midfield.
The ball was cleared, however, and Dicksboro edged through for a final shoot-out against arch city rivals, James Stephens in two weeks time.
Early on Oisin Gough and Jack Nolan traded points, but the 'Boro had a narrow escape in the third minute when Sammy Johnston was deprived of a goal by a body block from 'keeper, Darragh Holohan, who repeated the act twice subsequently.
O'Loughlin's claimed a point from a 65 by Mark Bergin conceded by that save, but when they conceded a goal to Martin Gaffney a minute later to fall behind, they were led all the way home.
At half time Dicksboro led by 1-9 to 0-8, but the champions had to be far from happy after shooting seven wides during that period.
Martin Comerford pointed for the losers immediately after the turn, and then on 32 minutes Holohan made another crucial block, this time from Sean Bolger.
When the 'Boro put two scores together from frees by Shane Stapleton they slipped into the last quarter leading by 1-12 to 0-10.
The exchanges were even after that until Paddy Deegan and Jordan Molloy put points back-to-back for O'Loughlin's to leave the score 1-14 to 0-14 in the second minute of injury-time.
Dicksboro held out during the losers 'all in' last raid to get back into their first final since 2012.
SCORERS: Dicksboro - Andrew Gaffney (0-4); Martin Gaffney (1-1); Shane Stapleton (0-3); Oisin Gough, Bill Sheehan (0-2 each); Ollie Walsh, Robbie Fitzpatrick (0-1 each). O'Loughlin Gaels - Mark Bergin (0-8); Jack Nolan (0-2); Paddy Deegan, Sean Bolger, Martin Comerford, Jordan Molloy (0-1 each).