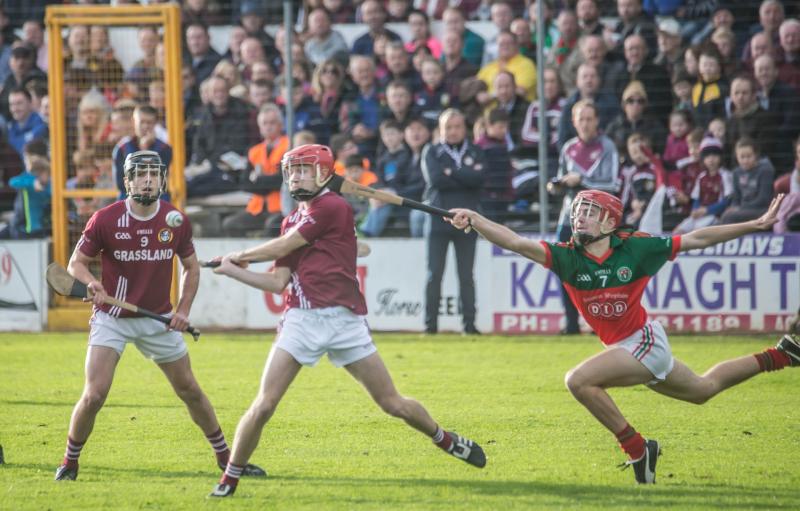 Unbeaten Dicksboro ran up their tenth successive win of the season in thrilling fashion when roaring to victory in a high scoring Kilkenny senior hurling championship final at Nowlan Park today.
After a goal scoring feast in the first half when the teams shared equally in six goals and both 'keepers brought off terrific saves, the action eased somewhat afterwards as Dicksboro maintained their grip on things before claiming their fifth championship success.
After an early exchange of points between Ollie Walsh and Tadhg Dwyer, the 'Boro hit the goal trail in the second minute when Bill Sheehan rattled the net.
The game simply took off from there, with both defences vulnerable at times, but the winners pace and link play up front was massive.
The Village got a grip on things when former Irish soccer international Mickey Drennan grabbed a brace of points and then Luke Scanlon goaled in the 11th minute to level it at 1-4 each.
After Robbie Fitzpatrick pointed the winners back in front, Oisín Gough shot a goal at the second attempt nearing the end of the quarter to really light the fire under Dicksoboro. They roared on and when Gough repeated the act in the 19th minute the gap was suddenly a yawning 3-10 to 1-4.
The Village roared back, and when they hit the goal trail through David Walton and Tadhg Dwyer they were still very much in the hunt although 3-5 to 3-11 down at the break.
Dicksboro opened the new half with back-to-back points from Ollie Walsh and former Dublin panelist, Shane Stapleton but in the free scoring nature of the match James Stephens hit back through Luke Scanlon and Matt Ruth.
The exchanges were close for a while afterwards, but then the balanced tilted when a goal chance was missed at one end, and one was scored at the other.
The Village threatened first in the 41st minute, but Dicksboro goalie Darragh Holohan brought off a powerful body block from Matt Ruth. When the action swung down the field Shane Stapleton crossed from the right wing, and although he still had a lot of work to do Martin Gaffney plundered a goal to open out a 4-13 to 3-7 lead that put the match beyond the reached of their city rivals.
This was the first city derby since 1950 and first clash between the clubs since 1937, but no one, just no one could have forseen the Hallowe'en fireworks that erupted as Dicksboro completed their first league/championship double.
SCORERS: Dicksboro - Oisín Gough (2-0); Bill Sheehan (1-3); Shane Stapleton (0-5); Martin Gaffney (1-1); Ollie Walsh (0-2); Thomas Kenny, Aidan Nolan, Robbie Fitzpatrick, Paul O'Flynn (0-1 each). James Stepehens - David Walton (1-5); Matt Ruth, Tadhg Dwyer, Luke Scanlon (1-1 each); Mikey Drennan (0-2).