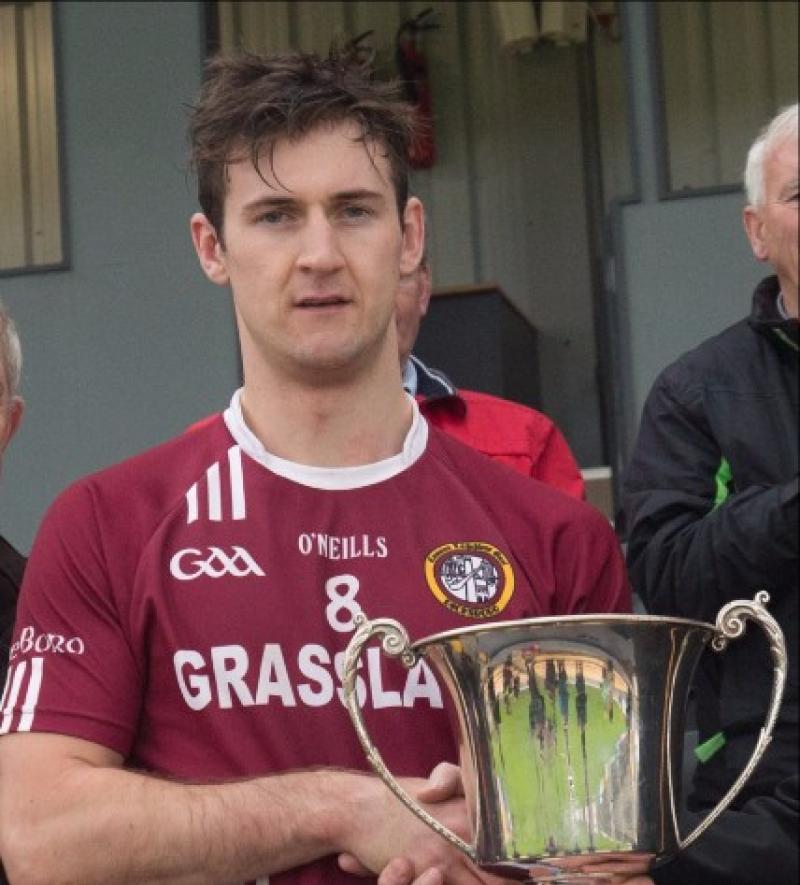 Dicksboro captain, Ollie Walsh, was presented with both trophies in the senior hurling grade, as winners of the League and Championship

Kieran Crotty, wily old campaigner that he is, called the county hurling final correctly.
Okay, as a former Dicksboro man he can be accused of partiality, but that’s beside the point. “They’ve been lucky along the way,” the full-back on the club’s championship-winning team of 1950 declared last week of the current iteration.
“I think they’ll finish lucky. Well, not lucky. They’ll finish…winners.”
And thus it came to pass. They finished winners alright. Glorious winners. A wonderful county final and wonderful new champions. That’s the way to snap a 24-year drought.
Admit it. You thought – or feared – it would be tight and attritional, a deathly embrace between neighbours and city rivals. Mark Dowling, the Dicksboro manager, did. Your correspondent did too. By the end of the opening quarter, with three goals on the board, such suspicions had been well and truly exploded. By half-time there were six goals on the board.
We’ve had enough Kilkenny finals in recent years which were mundane or adequate or slightly more than passable. We hadn’t one which engaged the senses and provided rich and pure entertainment until Sunday’s came along. Judging by the reaction on social media, TG4’s audience were captivated. Me, I haven’t had as much fun in Nowlan Park since Bruce Springsteen.
Look at that scoreline again: 4-15 to 4-10. It’s like something a Kilkenny county final of the 1970s might have produced, or at least like something we imagine a Kilkenny county final of the 1970s might have produced.
With Michael O’Sullivan having the good sense to let proceedings flow, what provided a golden sheen to the affair was not so much the frequency of the scores, welcome though it was, as the quality. Has the old place ever witnessed so many really good goals and points?
The opening score from Ollie Walsh from the left wing after a smart and simple diagonal pass from Cillian Buckley, the brains of Dicksboro’s operation. Those terrific points from distance from Thomas Kenny and Aidan Nolan, the wing-backs. Oisin Gough’s two goals, both cracking efforts.
For the first he chose his spot and went low. For the second he opted to go back across Derrick Brennan. Both were directed so finely and struck so well as to be unstoppable.
Speed and Dexterity
There were two teams on it, of course. James Stephens’ three goals in the first half were all exceptional efforts, Luke Scanlon’s the pick of them – he was tracking away from the opposition uprights when he made contact – but Tadhg Dwyer’s also worthy of high praise for the speed and dexterity with which he transferred the sliotar from turf to wrist. As he demonstrated in the semi-final against Ballyhale Shamrocks, Dwyer is very sharp indeed in the last 20 metres of the field.
Even if the fecundity of the Dicksboro production line was no secret, it still came as a surprise to discover that no fewer than ten of their starting 15 were 22 years of age or under.
For the past half a decade we’ve been looking at successful under-age teams emerging from Palmerstown and wondering when the club would manage to replicate the vibe in the adult arena. On Sunday they finally did.
If Dicksboro were glorious winners, it follows by implication that their opponents were above-average losers. That 4-10, or 22 points, would have won nine out of 10 county finals. And James Stephens had their own share of youngsters on view on Sunday. For both clubs there’s every chance that the day will amount to a starting point rather than a colourful one-off.
It was a splendid advert for Kilkenny hurling and badly needed. Whether it comes to anything in a wider context remains to be seen. Very possibly not, although it would be nice to imagine that Bill Sheehan, who in the semi-final had been lively and speedy without showing it on the scoreboard, might be seen in colours other than maroon and white at some stage in the future.
A date with Cuala, the All-Ireland champions, beckons next weekend for Dicksboro. Clearly they’ll be up against it. But, unbeaten all year, why should they stop now?
They’re winners. Just like Kieran Crotty predicted.