Where are Kilkenny now: Cody pleased enough with things to date 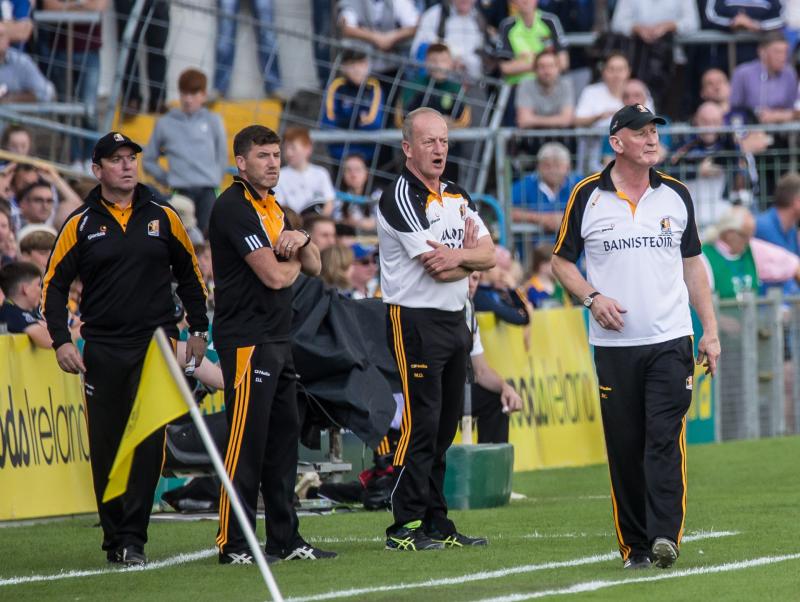 The Kilkenny players were praised for the battling qualities they showed in a dark, dark situation during Sunday’s National Hurling League clash against Clare.
At one time during the Nowlan Park game the visitors held a commanding lead of 11 points, but nearing the finish the Cats had pared that back to a mere two points and with a bit of luck they might have taken something from it.
“You would be very unhappy with things at half-time, but our reaction to a tough situation was good,” manager Brian Cody insisted afterwards.
“Obviously there was a huge improvement in the second half. In the first half the game went away from us. Clare were totally on top. The first half was disappointing,” he said in reference to a scoreline that read: Clare 2-12; Kilkenny 1-7.
“In a situation like that you can put your head down and say it is not our day, or you can fight to the bitter end,” the James Stephens man continued. “We fought to the end.
“The second half performance was encouraging, but at the end of the day we have played two League matches and lost two League matches. I was very, very happy with our second half performance.
Close
“We were close to getting something from the game, but in the overall game we didn’t do enough to get it.”
Losing four points left Kilkenny in a tight enough corner, it was suggested to him.
“There are six points to play for,” he replied. “You battle on. That is what you do. We will go into the next game hoping to turn things around. We lost by three points today and three points the last day.
“Obviously we are not getting badly beaten or anything, nor should we be. There is a break now of a week. Our next game against Waterford will be a huge one, as will the following one, and the following one after that.”
He insisted he was upbeat about where Kilkenny were heading.
“I am always positive,” he assured. “In the second half our performance was decent and honest. Our backs were to the wall.
“It was looking like we might get a hiding, but the players were very honest in their work and they did something about that. We just keep working away.
“We put no limits on what anyone can or can’t achieve,” he said when it was suggested a lot of the players were young and were inexperienced at this level. “If we had gone away from that game at half-time we would have been disappointed.
Disappointed
“At the finish we were disappointed to lose, but overall there were a lot of positives we can take from the game,” he insisted.
He felt relative to the showing against Cork, Sunday’s effort lacked consistency.
“We were more consistent from start to finish against Cork,” he felt. “Again we conceded an early goal against Cork. We conceded two this time. They are things you can’t afford to be doing.”
On the injuries front he said T.J. Reid had a calf strain which flared up after his short outing as a sub against Cork. Conor Fogarty picked up a virus, but he should be back playing shortly.
Richie Hogan was out of the equation for the moment, he added, while Ger Aylward (shoulder) was working his way back “very, very well”.
It was heart-stopping stuff towards the end, Clare joint manager Donal Moloney admitted.
Major Fight
“We didn’t anticipate anything different even when we were 11 points ahead. We were in with the forwards telling them to push it home, push it home because you never come out of here without a major fight.
“It was never going to stay like that and we were fortunate to have built that lead at that time as Kilkenny came roaring back. They were relentless in the second half. That was some game for this day of the year.”

Both teams, he felt, kept up an incredible pace. Clare were disappointed with a few things in the second half.
“The amount of chances we missed was unreal, but the pressure was on. That’s something we are going to have to look at as we really should have been out of sight even with Kilkenny’s relentless second half.
“Eighteen wides is something. It’s a worry but its something to work on.
“It’s worse if you are not getting into the positions to shoot, but a lot of those efforts were on. We have really got to work at that.
“It’s something we have spoken a lot about but it’s something we won’t fix overnight.
“Today was a different game completely to last week,” he added. “The second half was way tougher.
“The second half was way tougher in terms of physicality and the pace of it and the fact that the momentum was completely in Kilkenny’s favour in the last 10 minutes so we had to make big tackles and big interceptions.
“The lads did well. We will continue to give more game time to different players, but its a balance between trying to build a team and give lads more game time.
“We have three tough games to go. It’s a horrendous schedule.
“We have Cork next in Ennis and we will prepare hard for that. It will be a big challenge,” he insisted.