Plenty of goals in Cup, while Clover United move closer to reaching the Premier Division 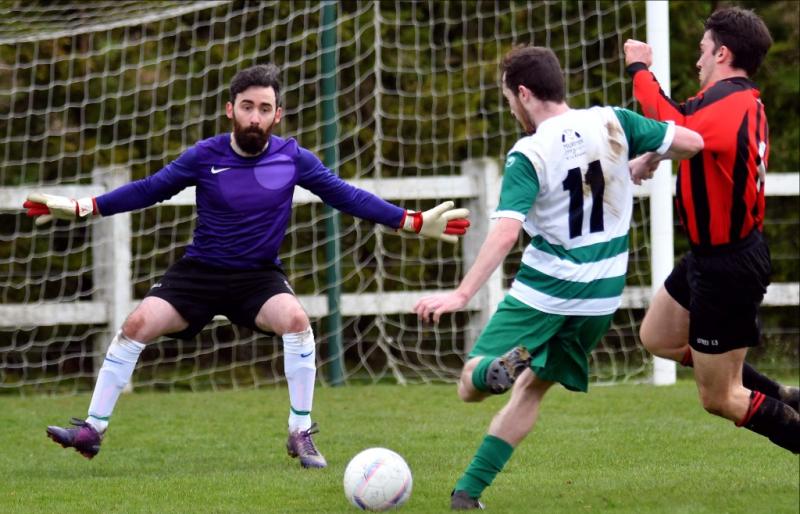 Deen Celtic netminder Robbie Lynch faces down an attack on his goal by Ben Hickey (Evergreen A) as defender Richard O'Shea closes in during their McCalmont Cup clash. PICTURE: MICHAEL BROPHY

Cup competitions and shock results go hand in hand, but the McCalmont Cup still managed to raise a few eyebrows at the weekend.

Evergreen C made the headlines when they sent Premier Division title challengers Freebooters A packing from the Cup.

Stung by their midweek league loss to Evergreen A, the Blues made a good start when David Rice gave them the lead on the Fair Green, but they were stung when Cian Morton levelled matters before half-time.

The visitors, who fielded a young side with four youth players involved, stepped things up in the second half and stunned their hosts after Cormac Hogan was taken down in the box. Eddie Teehan stepped up to take the resulting penalty and made no mistake. Freebooters brought on some of their big guns in the second half, introducing Emmet Nugent and Henry O’Neill to the fray, but they couldn’t turn things around before the final whistle.

Callan United 0, Highview Athletic A heaped more misery on Callan United when they beat their Premier Division rivals 4-0 to move into the Cup’s quarter-finals.

Sheamie Kavanagh (2), Dean Broaders and Ralph Kavanagh were on target for Highview as they made their trip to Callan a worthwhile one and earned their third win of the season over United, whom they’ve beaten at home and away in the league.

Last year’s finalists are also through to this year’s quarter-finals. Thomastown United A put their name in the hat when they scored a 2-0 win over Evergreen B on the Kells Road. C.J. Browne gave them the lead in the first half, before Stephen Connolly’s diving header in the second half sealed their last eight berth. Champions Evergreen A cruised into the last eight when they beat Deen Celtic A 4-0 thanks to goals from Dara Keane (2), Ben Hickey and Sean Barcoe.

The final spot in the last eight will be decided this evening (Wednesday) when Highview Athletic B play host to Spa United.

Clover United’s charge towards the top flight shows no signs of faltering. The Rathdowney men put more daylight between themselves and the chasing pack in Division One when they beat Castlewarren Celtic A 4-0 on Sunday.

Shane Bowe continued his good scoring run when he bagged a brace on the Water Barracks, with Mark Treacy also chipping in with two. It was a good win for Clover, who dominated despite the tough conditions, and helped them to open up a nine-point lead on Freebooters B and Fort Rangers.

While they can’t catch the leaders, Freebooters made sure they stayed in the promotion hunt when they beat Thomastown United B 4-1. There was another brace for Charlie Deegan, adding to the two goals he scored against River Rangers in the McCalmont Cup last week, while Andy Walsh and Glod Landu were also on the scoresheet. Sean Doyle’s side will play the leaders on Sunday, knowing a win is a must if they are to keep their hopes of going up alive.

Elsewhere the Lions bounced back from their loss to Castlewarren Celtic when they beat Stoneyford United 3-1.

Brookville gave their hopes of dodging the drop in Division Two the world of good when they beat River Rangers 7-1 in Scanlon Park. They are still in relegation zone, but have closed to within a point of Ballacolla, who are third from bottom.

Everything is still all to play for in Division Three, where East End United and Freshford Town are neck and neck in the race for the silverware. Freshford Town moved level with East End at the weekend without kicking a ball - they were given a walkover by Castlewarren Celtic B.

The title race could be decided on Saturday evening, when East End United entertain Deen Celtic B in Bennettsbridge at 6.30pm. Freshford Town will be in action at the same time, travelling to Graignamanagh to play Highview Athletic B, who beat Evergreen 46 5-1 at the weekend.

A win for either side will seal the title - if they both get all three points the league will go to a play-off.

Earlier in the week Evergreen A took a big step in their Premier Division title defence when they beat Freebooters A 2-0 on the Kells Road. After a scoreless first half hour Mikey Drennan broke the deadlock in style when he curled a free-kick from the edge of the box and over the four-man wall. Freebooters goalkeeper Ciaran Farnan got his fingers to the shot but couldn’t keep it out.

The home side doubled their lead three minutes from half-time when Jamie Owens deftly cushioned a Sam Hickey cross past Farnan. Evergreen never looked to be in any bother after that, even after losing captain Niall Andrews to a second yellow card five minutes into the second half.

The result leaves Gary Maher’s side three points behind leaders Thomastown United A but they do have a game in hand. As for Freebooters, who lie third, they will have to win their three games in hand to have any chance of lifting the title - and then beat United when the sides meet at the end of the season.