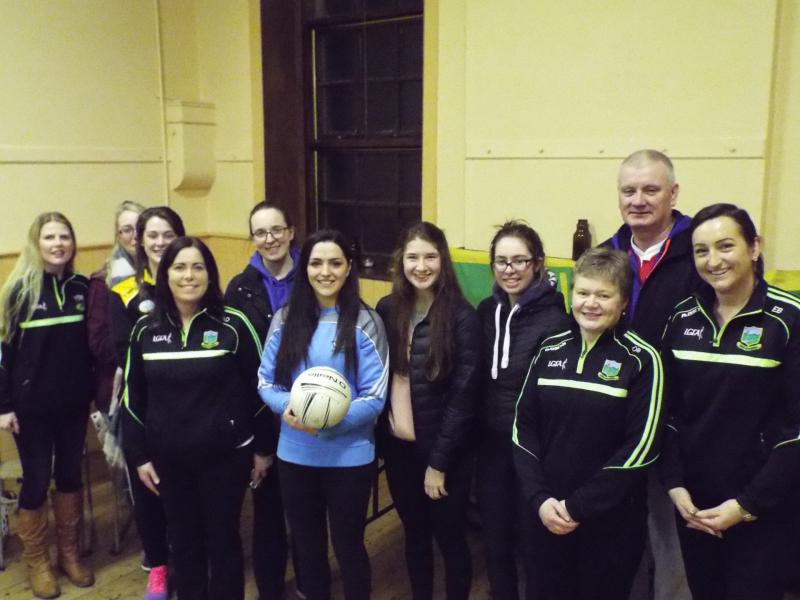 Dunnamaggin Ladies Gaelic Football Club has flourished since its set up only three years ago.
With numbers of registrations having more than doubled since then they are now the
largest Ladies football club in the county. Their first year of registrations was such a success
that Ryan Tubridy and the 2fm Roadcaster spent a morning at the club chatting on air to the
founders and locals. Ireland AM also travelled to Dunnamaggin to find out more about this
ground breaking club and they had a prominent feature on the show.
Since its foundation the club has catered for all age groups U6-Minor and has a fantastic,
non-competitive Mothers And Others group. This group won a nationwide, fun competition to
play in Croke Park last year, which was huge excitement for the community who travelled in
their busloads to support them.
This season Dunnamaggin LGFC have formed their first adult team, thus catering for every
female in the parish. Last month they had the launch of this team with women aged 18-38,
from the parish and beyond, showing up to register their interest in joining the club and
playing for this newly formed adult team.
Dublin All- Ireland Ladies Football winner and five time All-star Sinéad Goldrick also arrived
to Dunnamaggin to show her support and encouragement for the formation of the new
team. Sinéad spoke of the enormous benefits to her, as a teenager and now as an adult,
from being part of a Ladies Gaelic Football Team. She assured all attending the launch that
the positive social and health impact of being part of a team can be life changing.
The team is managed by Kildare native Paul Whelan, who formed part of the 2007
Kilkenny County management team, who won the Junior Ladies Football All-Ireland.
For more information about this adult team or indeed joining any other team in this ever
expanding club please contact Anne Davis on 087 2766427.