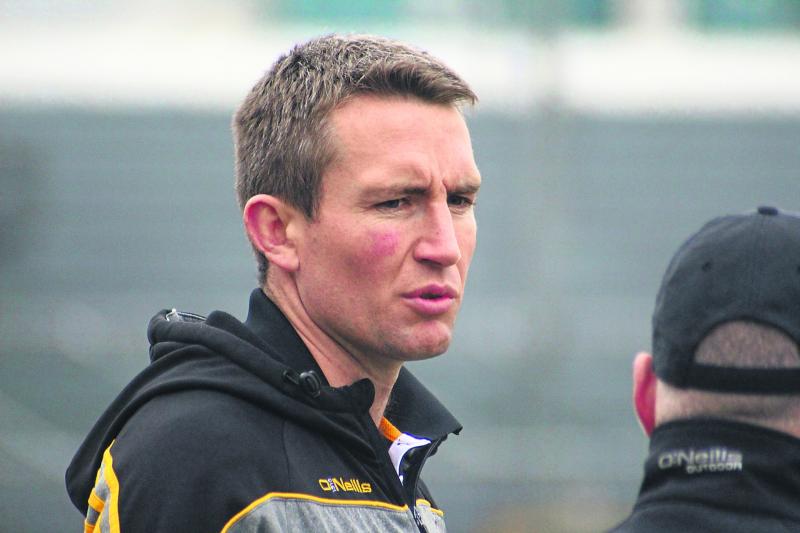 Eddie Brennan, the Laois manager will be facing players he could be calling on next season in Leinster club final

Minutes earlier both sides had a man red carded in this clash in New Ross today. This isolated incident in an otherwise sporting contest was followed by a St Mogue’s (Fethard) point from Mark Wallace to reduced the gap 0-14 to 1-8.

During the next few minutes Graigue played their way out of trouble and into a home venue showdown against Portlaoise (Laois) on Saturday, December 1.

A reply to Wallace’s point came from deadly free-taker, Conor Murphy, who punished a foul on Aaron Brennan. Then Eddie Brennan struck for a goal from 12 metres, after Billy Ryan made the opening following a searing run on the left.

And within 60 seconds Sean Ryan sent the green flying again, this time after good work on the ball and unselfish play by Aaron Brennan.

Suddenly the gap shot up to 2-15 to 1-8 and there was no way back for St Mogue’s, who put junior and intermediate championship wins back-to-back in Wexford.

Graigue, and especially free-taker Murphy, were in good form from the off. Murphy claimed seven of their points - Sean Ryan shot the other - as they played their way nicely into a decent lead of 0-8 to 1-2 after 19 minutes.

By the rest Murphy, who claimed two scores from 65s and also landed some very testing efforts, added another score, and with additions from the very effective Billy Ryan and Sean O’Dwyer they led by 0-11 to 1-3 at the break.

St Mogue’s had the opening point of the new half from Jimmy Sutton before Eddie Brennan brought a great save from goalie, Kieran Furlong, at the other end.

The losers enjoyed the better of things for a while, but then two dust-ups in the space of a few minutes ended with James Ryall (GB) and Mikey Dwyer (St M) being red carded following the second incident. The dismissal means the former Kilkenny star will miss the final.

The losers picked off the next score after the skirmish, but Graigue steadied-up quickly, and they blasted the opposition for 2-8 before the finish to underline their superiority.

An interesting aside to the Leinster final is that Graigue’s Eddie Brennan, the new Laois manager, will be facing some of the players he could have in the county colours next season.