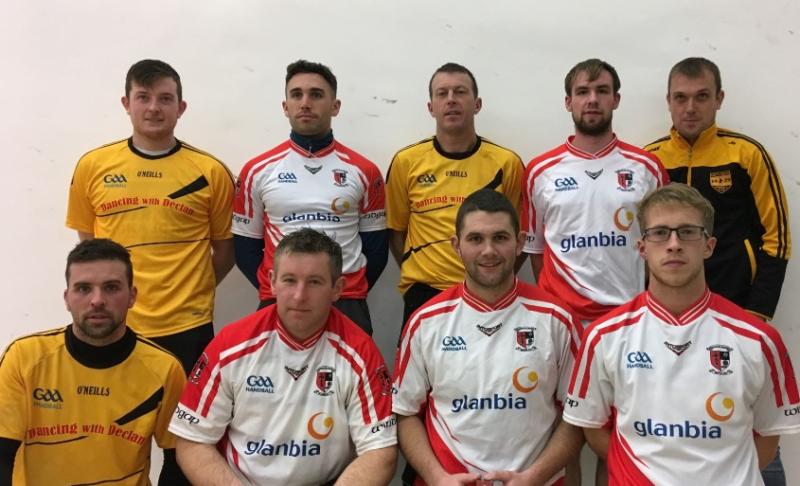 Pictured are the Leinster junior 'B' team of four champions, Windgap (in red)

This Saturday the Windgap junior ‘B’ team of four travel to Roscommon in search of their first All-Ireland title.
The South Kilkenny club scored a comfortable 75-49 victory in the Leinster final against Castlebridge and will now face Kingscourt in the semi-final at Curraghboy on Saturday (11am).
Awaiting the winners in the final (4pm) are Hospital, Limerick or Newport from Mayo.
The Windgap team is Sean Foley, Eamonn Hawe, Cian Ryan and Darragh O’Shea.
Team Of Ten
The Leinster girls team of ten which will contest the inter-provincial series on Sunday will contain a number of players from Kilkenny.
Representing the province in Moycullen, Galway will be Aishling Cooney and Amy Brennan from Clogh, Eimear Barron and Sontae Jackson from Windgap and Noelle Dowling from Mothel.
Golden Gloves
In the Golden Gloves tournament in Belfast at the weekend, three Kilkenny players contested the Open men’s and ladies events.
All three exited the events following tough matches against some of the top seeds.
In the ladies event Aoife Holden (Kilfane) was beaten by former World champion, Aishling Reilly from Antrim.
There was no luck either for the Funchion brothers from Kells.
In his quarter-final against current All-Ireland champion, Martin Mulkerrins (Galway), Peter lost out in the third set 13-15, 15-13, 9-11.
His brother Patrick also had a tough quarter-final match. He was defeated by eventual winner Diarmuid Nash (Clare) in two games 15-5, 15-8.
There was success for Kyle Jordan, Kilfane. He won out the boys 13 and under grade. His sister Katie was a beaten semi-finalist in the girls 13 and under competition.