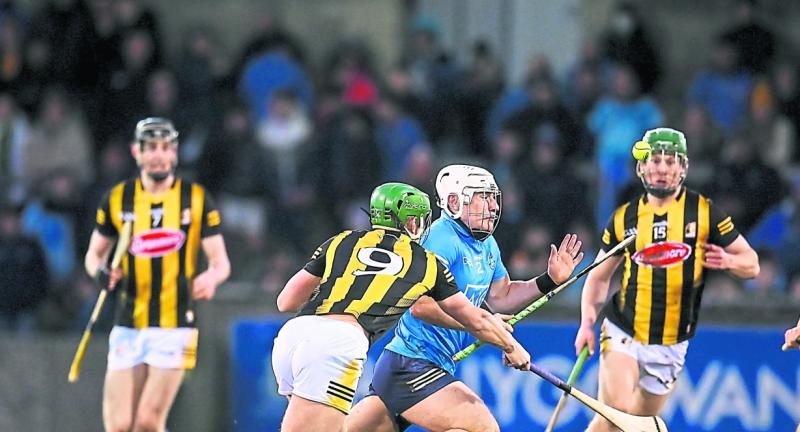 Andrew Dunphy (Dublin) finds himself surrouded by black and amber as Cillian Buckley leads the Kilkenny pressure during the Allianz Hurling League Division 1 Group B match at Parnell Park .

Kilkenny’s win over Dublin on Saturday night means they are very much still in the hunt for a place in the knockout stages of the National League.

Brian Cody’s team currently occupy second spot in Division 1B. If they avoid defeat against Waterford on Sunday week they will join the already qualified Cork and Wexford in the last four.

Taking all that into account, the Kilkenny boss was very pleased with how his side performed on Saturday evening.

“It was a good performance, definitely,” said Cody. “We knew coming up here it was going to be a serious challenge. The attitude was very good, the competitiveness of the team was good and we fought until the end, and it paid off.”

One of the main stars on show was Padraig Walsh with the Tullaroan man continuing in his relatively new position at centre-forward.

The 29-year-old two-time All-Star scored four points from play and he’s proving to be a real asset in attack for a Kilkenny side that is without the likes of TJ Reid, Eoin Cody and Adrian Mullen.

“Padraig plays a huge amount of hurling at centre-forward with his club,” said Cody.

“He has played just about everywhere on the pitch over his career, very often in the forwards. So it was just something we looked at and we tried; we are very happy with the way he’s going.

“It’s the opportunity to play lads and look at lads,” he added. “Sometimes we do it out of choice and sometimes because of injuries to other players. It’s gone okay for us.

“The timespan between now and the start of the championship almost doesn’t exist so you have to be hitting form very quickly and keeping it going as well, because it is going to be week after week pretty much, short and snappy and very, very competitive.”

This year’s condensed calendar means Kilkenny will play five games in six weeks at the conclusion of the National League with crucial Leinster championship games against Galway, Dublin and Wexford at the back end of the round robin series. For Cody, it’s just a matter of seeing how things work out.

“Look, we’ll see how it goes, I don’t know,” he said. “All you can do is whatever is put in front of you and we have to take it on, that’s the way we have to look at it.”

Kilkenny have used 29 players throughout their four games in the National League and with the Shamrocks contingent yet to make their return from club duty, the squad will need to be cut ahead of the championship.

For now though, getting everyone fit will be the main objective of the Kilkenny boss after he saw Tom Phelan and Cian Kenny go off with first half injuries.

“Tom Phelan has a hamstring (injury), he’s probably the worst one, definitely a few weeks,” said Cody. “Cian got a knock to the knee, but hopefully it’s not too bad.”