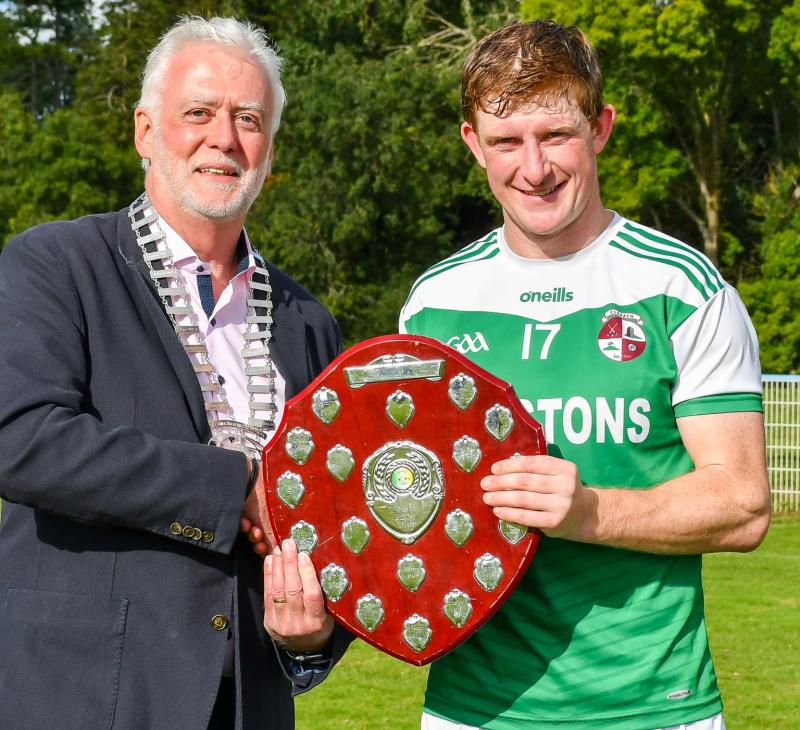 Clara captain Jack Langton receives the league shield after his side’s come from behind success against Dicksboro in Thomastown on Saturday afternoon. Pic: Billy Culleton

Chris Bolger led the way for Clara as they fought back in a thrilling conclusion to last Saturday's Senior Shield Final in Thomastown.

A Bolger goal in the 43rd minute brought Clara back to within a point and he added four points from play in the final 10 minutes as they grinded out a tight victory.

In a tame opening half where The Boro led 1-12 to 1-6 at half-time, the city men were quicker out of the blocks and with Harry Shine on target three times from frees they led 0-6 to 0-2 by the 13th minute as Timmy Clifford, Bill Sheehan and Liam Moore also found the range.

The outstanding John Murphy and Jason Byrne from a free added to Clara's account to narrow the deficit (0-6 to 0-4), but Dicksboro replied with points in succession from Chris Kavanagh, Timmy Clifford and Bill Sheehan to lead 0-9 to 0-4 in the 21st minute.

The Boro confirmed their superior first half dominance with a brilliantly constructed goal by Aidan Nolan in the 24th minute as he finished a superb team move involving Alan Phelan, Bill Sheehan and Conor Fitzpatrick, 1-9 to 0-4.

Dara Glynn replied with a goal for Clara, before Cillian Buckley - who gave an exceptional exhibition at centre back during the first half - struck over a superb long range point that was thoroughly deserved for his efforts.

Buckley's point put the Boro 1-10 to 1-4 up and they maintained that six point advantage at the interval(1-12 to 1-6).
Clara kept battling away and they managed to curtail the influence of Cillian Buckley throughout the second half while improving their overall work ethic.

Dicksboro sub Andy Gaffney took over free-taking duties and he pointed from a placed ball to double their advantage(1-15 to 2-10), but Clara drew level courtesy of a brace of frees by Jason Byrne, 1-15 to 2-12.

Andy Gaffney (two frees) and Ollie Walsh with a superb long range effort added to the city mens account, while Clara's tally was improved on thanks to points from Liam Ryan and Chris Bolger(2). 2-15 to 1-18.

With the game deadlocked, Chris Bolger took the game by the scruff of the neck and he added further points in the 57th and 59th minutes, before Jason Byrne pointed another free as Clara were on the verge of victory entering injury-time, 2-18 to 1-18.

Dicksboro were not finished yet and substitute Stephen Farrell added a point, before Cillian Buckley surged forward to set-up team captain Bill Sheehan as his goal attempt was blocked by Kevin Nolan at the expense of a '65.

The resulting '65 went wide as the game concluded and Clara held out for victory.

Defensively, Clara were a lot tighter & secure in the second half with in particular goalkeeper Kevin Nolan, Jack David Langton and Martin O'Connell along with Conor O'Shea doing a lot of great work, while John Murphy and Chris Bolger led the way in attack.

Dicksboro were wasteful with 14 wides overall and it’s something to work on ahead of next weekend's Championship Quarter-Final.

They were best served by Cillian Buckley, Ollie Walsh and Alan Phelan, while Liam Moore(until going off) and Timmy Clifford were prominent throughout the Boro’s first half showing.