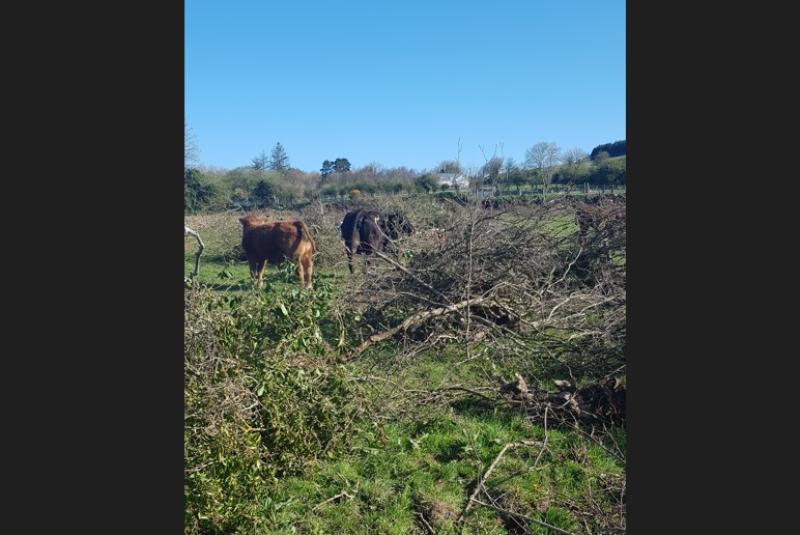 The Kilkenny man, pleaded guilty to the destruction of the growing vegetation in a hedgerow between the  March 1 and 31 August, 2021 contrary to Section 40 of the Wildlife Acts at Waterford District Court earlier this month.

The offence was investigated by the National Parks & Wildlife Service (NPWS) of the Department of Housing, Local Government and Heritage. It was prosecuted under the Wildlife Acts by William Maher BL, instructed by Gerald Meaney, State Solicitor for County Kilkenny.

In his evidence to the Court, an NPWS Conservation Ranger told Judge David Staunton that on April 14, 2021 he travelled to a location in South Kilkenny to investigate a complaint from a member of the public that hedgerows were being destroyed. On site he found a machine and piles of vegetation which he believed had come from a hedgerow dividing two fields. The Ranger observed that some of the vegetation had fresh leaves on it. Follow up enquiries lead him to the farmyard of the defendant whom he interviewed. The Conservation Ranger acknowledged that some of the work may have commenced before March 1 but that the majority was carried out after that date and right up to the day he called to the property.

The NPWS Conservation Ranger outlined to the court that all birds were protected by law, and that the removed hedgerow and grubbed vegetation from another section of hedgerow would have provided nesting opportunities for many farmland bird species. The court was informed that the bird nesting season is widely advertised and commonly known amongst farmers and farming organisations.

In summing up, Judge David Staunton took into account the guilty plea and that as a farmer the defendant was carrying out works to improve his farm. However the Judge commented that this was not the taking out of a bush or pruning back of a tree, and he described the removal of 112 metres of hedgerow as major activity.

Judge Staunton stated that he was impressed with the evidence provided by the NPWS Conservation Ranger. He said that the work carried out by the farmer was a blatant disregard for a piece of legislation and that it was important such legislation wasn’t ignored when it suited. Judge Staunton convicted and imposed a fine of €2,000.

Commenting on the conviction, the Minister of State for Heritage, Minister Malcolm Noonan, said:

“I welcome this conviction for major hedgerow destruction during the nesting season. Hedgerows are superhighways for nature, connecting habitats and species and providing important nesting and foraging opportunities for wildlife. They also sequester carbon, help with water filtration and attenuation, and purify the air. We need them in our landscapes and should be nurturing them. I’d like to acknowledge the sterling efforts and dedication of the NPWS staff involved in bringing this prosecution, and indeed the efforts of staff all around the country who successfully closed 21 prosecutions in 2021 and 21 more to date in 2022, and are currently progressing a further 47.

"I’d like to remind everyone that the NPWS has more rangers than ever, and that it’s never been more focused – or more effective – on wildlife crime.”