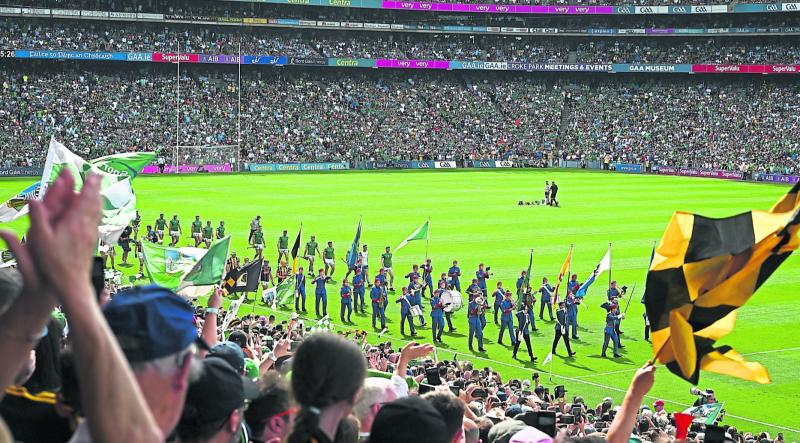 You can’t beat the buzz of All-Ireland final day and all that goes with it, regardless of the result.

From the early morning nerves to the growing anticipation as throw-in draws closer, one of sport’s greatest spectacles always delivers.

As fans poured into Croke Park on Sunday, two main topics formed the basis of discussion — the heat and the hurling.

With temperatures rising to 30C, it felt more like Dubai than Dublin.

On Hill 16, a large swathe of black and amber supporters were erupting like firecrackers.

Kilkenny fans also made their voices heard amongst the pastures of green in the stands.

While they might have been outnumbered, it was clear that they were hungrier than ever to see this Kilkenny team perform.

When pre-match festivities ended, Kilkenny were first out of the tunnel.

For many on the panel, their ears sampled the All-Ireland final roar as players for the first time.

As a spectator, it’s enough to send shivers down the spine. As a player, words can only be too limited in their ability to describe it.

Kilkenny won the toss and with that some sense of hope resonates from deep inside that luck would lie on the black and amber side today.

In reality, every match is a war, and every battle on the field weighs into the outcome.

Watching from the stands, you see these battles unfold with astonishing clarity.

Among the most interesting was the battle between Huw Lawlor and Aaron Gillane, a real 50-50 tussle.

Any time the ball was played into Gillane you felt a weight of expectation among Limerick supporters.

Likewise, any time Lawlor got the better of the Patrickswell marksman, the number of Kilkenny fans in the stadium was multiplied several-fold.

TJ Reid was a true magician, popping up in key areas of the field and winning balls he had no right to win.

GALLERY: Some of the best action pics from the Kilkenny vs Limerick All-Ireland final

Like many of the greats in sport that don the number ‘10’ jersey, he orchestrated his team with a razor-sharp assuredness, complemented by an abundance of skill.

With Limerick, the performance of players, especially Gearóid Hegarty, was remarkable to the extent that it was hard to get angry or annoyed by the damage he was inflicting.

One could only appreciate the ability, the skill and the remarkable tenacity.

Half-time came quickly and there was a relief amongst Kilkenny supporters at that stage that the team were still in the game.

In their pomp, Kilkenny developed a reputation for putting teams away at the beginning of the second half.

Patterns like these are always entering your mind. You’re left asking — is it still in them to spring a surprise?

Sure enough, in true old-school Kilkenny fashion, the momentum began to shift as the second half began.

The impact of Walter Walsh off the bench was immense and plain to see.

Within minutes of the restart he forced a green flag by storming in on goal and finding Billy Ryan in the perfect spot.

Following on from that, the sheer euphoria of the second Kilkenny goal from Mossy Keoghan was enough to justify the ticket price.

When Donnelly equalised directly after there was a sense that this Limerick team could be dismantled. There was also visible panic on the faces of the Treaty county supporters for the first time.

Like true champions however, Limerick regrouped and displayed incredible resilience.

Kilkenny went on to have further moments of brilliance, including a fantastic point from Richie Hogan, but it was not enough to stem the insurmountable Limerick tide.

When the final whistle blew, emotions were hard to place — except for pride.

This was a Kilkenny team that had been all but written-off at the start of the season but had almost dismantled the Limerick juggernaut twice on the spin.

This is now a Kilkenny team that will not be written-off again for a very long time.

As far as sporting spectacles go though, it really is true when they say that nothing beats being there.