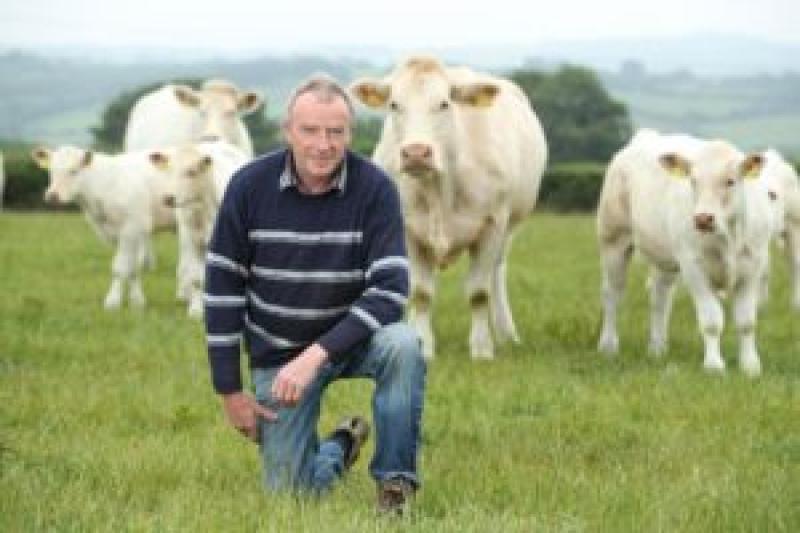 Kilkenny recently lost a true legend in his brave battle with illness. Maybe he was not a legend on the hurling field but in his own field of farming and cattle breeding, Christy Comerford will always be remembered with legendary status.

With the passing of Christy, Kilkenny, The Irish Charolais Cattle Society, and the wider farming community have lost one of its stalwarts whose contributions to the Charolais breed were both ground breaking and highly significant.
Christy was well known in the beef industry, was held in the highest of esteem and has blazed a trail for cattle breeders for many a generation.
He will be sadly missed in the farming world.

Christy was the salt of the earth who always reckoned he was educated in the University of Hard Knocks, but the harder the knock the stronger he became.
The first of those hard knocks came when his father passed away suddenly some months before Christy’s second birthday.
From an early age, he developed a passion for animals culminating in him buying his first Charolais calf at the age of six. This was the seed that spurred him on to develop the Knockmahon herd which now boasts up to 150 suckling cows and a herd of pedigree Charolais cows, not to mention the 250 ewes.

When we reflect back on Christy’s short but prolific life, let us remember first of all that he was a family man.
Christy loved his family, his wife Marguerite, his daughters Cynthia, Colette and Christine and his family loved him. To Christy, family came first and when he attended the Charolais meetings nothing made him happier than taking the opportunity to bring the family along where they could enjoy many a shopping trip, a visit to the swimming pool and even the odd hotel sleep-over.

The first time I set eyes on him with his strong Kilkenny accent was in 2006 in Carrick-On-Shannon, four days after his wedding. Many of his fellow competitors were left feeling sorry for ourselves when he cut his honeymoon short to show a bull in the Senior Male Class and he not only tapped out first prize but later on that day he went on to capture the Overall Male Champion Prize.
Christy was a wealth of knowledge and I absorbed it like a sponge. My only regret now is that I hadn’t talked to him for longer because I know the weeks ahead will be a whole lot longer without hearing his Kilkenny accent and his hearty laugh.

We became great friends from that time and when the opportunity arose in 2017, I invited him to stand for election to the Irish Charolais Society. Christy accepted the invitation and he was duly elected. His wealth of knowledge and experience of breeding top quality, pedigree and commercial Charolais cattle was not only greatly appreciated by the Society but resulted in his promotion to Vice Chairman after only a one-year stint on the committee. He carried out this role with distinction until March this year.

His knowledge of cattle breeding went far beyond most people’s comprehension. Christy aimed to both challenge and prove that the Charolais bull could be more versatile and that the breeding possibilities were not negatively set in stone. He successfully trialled a Charolais Bull with a herd of Saler heifers, resulting in 24 healthy calves being produced.

Farming was in Christy’s blood from a young age and his expertise in the beef world was second to none. He quickly went on to develop one of the finest beef herds in the country. One of the major reasons for his success was his incredible ability to identify bloodlines that would improve his herd. 99% of his bulls were sold at home on his farm and he promoted his bulls by bringing his top quality weanlings to Kilkenny Mart. We all could see the quality of the weanlings that were coming from his tried and tested bulls.

Livestock breeders dream of securing a breed championship at one of the many shows that take place around the country. For many, it is the pinnacle of their ambition but Christy achieved this many a time, winning the Overall Weanling Class for no less than 10 consecutive years at Kilkenny Mart.
In 2014, he reached the summit by tapping out first in the Senior Female Class before going on to win the Overall Female Champion at the Tullamore Livestock Show. He, himself, described it as winning an Ireland Hurling Medal.

He may not have been hurler but like his fellow county man, the great Brian Cody, he developed many champions and could make the ordinary seem extraordinary.
Someone once said you get out of the land what you put into it and Christy definitely did that. He built sheds that could accommodate up to 500 animals yet animal welfare was his top priority. His Knockmahon herd produced top class stock year after year. He supplied top quality bulls to farmers not only in the South-East but all over Ireland, to Scotland, Wales and even as far as Australia. In fact, he was looking forward to seeing the progeny coming from a bull he had sent to Australia.

Host of World Technical Congress
Christy liked nothing better that giving guided tours round the herd at Knockmahon. His Home Run came in 2019 when he and his family hosted the World Technical Congress, with delegates from all over the world coming to visit and see his high quality stock. And when the tour was complete he put on the party of all parties, hailed far and wide as the Hooley in the Barn.

As Christy said, he was educated at the university of Hard Knocks and just a few short months ago he was hit with the hardest of knocks of all. He bore his burden with great dignity and bravery.
As I drove back from Kilkenny, I could not help reflecting on the graveyard earlier when we said farewell to a loyal friend, a friend you could trust and one who always had your back. I reflected on the grown men reduced to tears and I couldn’t help thinking of the words of another great Christy when he sang ‘Crazy World’. My thoughts drifted to the thousands of people who passed through Knockmahon and attended his funeral, a testimony to the high esteem that he was held in.
Christy was one of our own, a hardworking man who didn’t need the comfort of a leather seat and a summer recess to know what’s best for the beef industry.

Christy was a fun-loving family man, a man of the earth, a man who lit up a room when he entered and who left you feeling better for his banter. His passing leaves an enormous void but we are all the richer for having known him. His memory will go on and his vision for the beef industry will never die.

Nancy Kraayenhoff once wrote a poem ‘Close the Gate’ about farming and I believe it is very appropriate way to conclude my tribute to my friend Christy. It reads like this:
For this one farmer the worries are over, lie down and rest your head,
Your time has been and struggles enough, put the tractor in the shed,
Years were not easy, many downright hard, but your faith in God transcended,
Put away your tools and sleep in peace. The fences have all been mended.
You raised a fine family, worked the land well under the hot summer sun,
Hang up your shovel inside the barn; your work on earth is done.
Your labour is done, your home now is heaven; no more must you wait,
Your legacy lives on, your love of the Land, and yes Christy – We will close the gate.
From your loyal friend, Kevin Maguire.