Sr Colombiere Kelly Dedicated to education in Kenya for 73 years 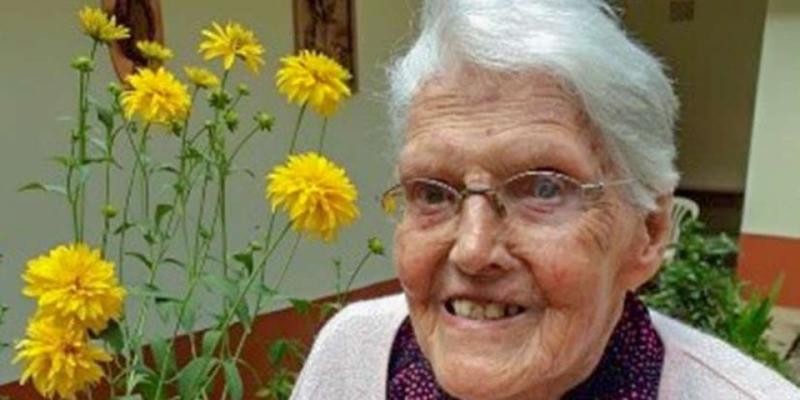 Sr Colombiere Kelly IBVM passed away in Nairobi, in January, aged 101.
Born Kathleen Kelly in Bonnetstown, Kilkenny, on June 21, 1919, Sr Colombiere went on to spend more than 73 years in Kenya, dedicating her life to education and her faith.
Known affectionately as Colomb to her fellow religious sisters and aunty ‘Kitty’ to her family and friends, Sr Colombiere passed away on January 9, 2021. She was laid to rest in Kenya.

Shortly after World War II, with a first class honours degree from University College Dublin, Sr Colombiere set out for Kenya to wage another war, this time on ignorance, the greatest poverty.
Ten years previously her predecessors had started the first school for Catholic African women in East Africa. Up to that time there was only one school for girls in the whole of East Africa, one quarter of the continent, and that was for Protestant white girls.

Into the Unknown
Into this milieu she thrust herself becoming the principal in 1952. There were Christmases when there was no food, they dodged Mau Mau bullets in the late 50s, mattresses were sacks packed with grass, the first girls unaccustomed to school, ran away, but little by little with perseverance, things went forward.

Eventually the school grew and girls reached the standard of the Cambridge exam. When the exam papers were sent to the UK, the nuns kept a copy of the pupils’ papers, in case the ship went down. Nothing was to stand in the way of the education of these girls.
Today there are many Loreto schools all over the Kenya. They became the backbone of the educational system. In 2013, the 50th anniversary of Independence, Sr Colombiere personally received an award on behalf of all Loreto for their contribution to education. The President himself, son of the founding father, was an alumnus.

Most of the prominent women in Kenyan history have come from Loreto schools, notably Wangari Maathai, who became the first African woman to receive the Nobel Peace Prize for “her contribution to sustainable development, democracy and peace” in 2004.
It is a story of development and evangelisation through education. Sr Colombiere was principal in Limuru for 25 years. Commenting on that period she said “those were great years”.
Sr Colombiere will always be fondly remembered by the Loreto sisters in the Eastern Africa province.

Early Life
Kathleen Colombiere (Kitty) Kelly (Sr Colombiere) was born on June 21, 1919 at Bonnetstown, Kilkenny, Ireland. A loving daughter born to Mary Kelly (nee Quinn) and Matthew Kelly. Her mother was from County Tyrone in the North of Ireland.
She was the last born in a family of six children (three girls and three boys). These were, in order of birth, Mary Bridget (Maisie) Walsh nee Kelly RIP, Ellen (Cissie) RIP, Timothy RIP, Peter RIP, Patrick (Paddy) RIP and Kathleen (Kitty) Colombiere RIP. All her siblings married so she is survived by many loving nieces and nephews, grandnieces and grandnephews and cousins.

Sr Colombiere attended primary school at Bonnetstown National School from 1925 to 1932 and secondary school at Loreto Convent, Kilkenny from 1932 to 1937.
She attended University College, Dublin from 1944 to 1945. She also undertook other studies through correspondence in a South African University from 1954 to 1955. She attained BA Degree Major in English and History.
She also undertook other long and short term courses, for instance, a one month in-service teacher training in 1941 in Loreto Falcarragh, Ireland; a Diploma in Scripture in Pretoria, South Africa in 1960.

Religious Life
Sr Colombiere entered religious life as a member of the Institute of the Blessed Virgin Mary (IBVM) commonly known as Loreto sisters on September 1, 1937 and was received into the Novitiate on June 17, 1938. She made her first profession on 17 June 1940 and perpetual profession on June 18, 1945. She celebrated her silver jubilee in 1962 and golden jubilee in 1987. She always celebrated, in a very special way, February 15, the feast of Claude de la Colombiere, her patron saint.
Sr Colombiere taught and held leadership positions in schools from 1948 to 1986. Twenty-five of these years were spent in Loreto Limuru. She was also in the Loreto House (Provincialate) community and here she played a very supportive role to the leadership.

The best way to capture this role is in the words of one of the province leaders she was with, Sr Caitriona: “She is my wisdom figure and great companion on the journey.” One sentence describes Sr Colombiere during this time – “a caring, compassionate, generous, and trusting companion who got her strength from the Lord”.

Revered Teacher
Sr Colombiere will be remembered as a great, renowned, greatly loved and revered teacher. She left Ireland as a beautiful young woman, full of great youthful dreams to answer God’s call “go therefore make disciples of all nations” (Matthew 28:19-20).
Sr Colombiere’s “yes” led her to Africa and to Kenya where she served without ever looking back.
The Loreto Sisters are one of the few groups given a special award to acknowledge their contribution to the education of the Kenyan girls and women.
Sr Colombiere, accompanied by Sr Nuala and Sr Seraphine, went to the State House on December 12, 2013, when Kenya celebrated its golden jubilee, to receive the award from His Excellency Uhuru Kenyatta, the President of the Republic of Kenya, on behalf of the Loreto Sisters.

In recent years, Sr Colombiere moved to Shukrani Msongari where the community’s senior sisters live in a community with younger members who are involved in various apostolates.
Sr Colombiere was a member of the Institute House of Prayer and House of Prayer representative of the Eastern Africa Justice and Peace Committee. She had great devotion to the Blessed Sacrament and prayed faithfully in the oratory morning and evening, even during the week of her final illness.

Peaceful and Prayerful
Sr Colombiere enjoyed good health most of her life except in her later days. She lost the ability to see and also had difficulty walking but what was never lost was her sense of beauty, love for life, taking short leisure walks, connection with her family back home in Ireland, her family in Kenya, her past students, the intrigues of the politics in Kenya, the national and international news and the interest in the different apostolates the Loreto sisters were engaged in, in Kenya and abroad.
During the last few years she was in and out of hospital and was always very appreciative of the care she received from her doctors and nurses in the Nairobi hospital and the community in Msongari. She always appreciated the staff who cared for her. She was very interested in their personal lives and understood the many struggles that they had to face. She prayed for them every day.
Sr Colombiere went peacefully back to her Creator whom she loved dearly and served faithfully on January 9, 2021.