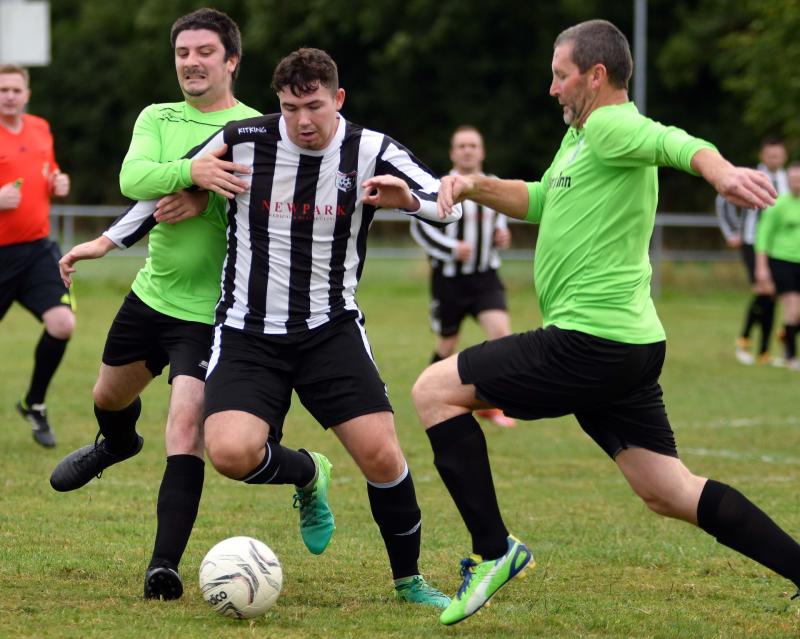 Craig Hayes was among the goals as Newpark marched into the McCalmont Cup semi-finals PICTURE: MICHAEL BROPHY

It was a good weekend for several clubs in the Kilkenny & District League as the chase for silverware gathered pace.

Newpark are already assured of one title, but kept their hopes of bagging another alive when they beat Highview Athletic A to book a place in the semi-finals of the McCalmont Cup.

The city side travelled to Graignamanagh for Sunday’s crunch game and made a flying start, taking the lead inside 90 seconds with a Craig Hayes header. A Murty Broaders penalty brought Highview, who recently won the Maher Shield, level but Joey Walsh’s stunning strike had the Division Two league champions back in front before half-time.

Highview kicked on in the second half, getting back on level terms again when Sheamus Kavanagh netted from close range, but they were sunk when Newpark’s goal threat Henry O’Neill struck the winner from a free-kick.

Newpark will be joined by two more city sides in the final four of the Cup. Reigning champions Evergreen A made sure of their place in the semi-final draw when they beat clubmates Evergreen B 3-0. In a repeat meeting of Thursday’s Premier Division clash, which the A team won 6-0, Gary Maher’s side took an early lead through Sean Barcoe. The B team made life difficult for the opposition after that, and were in contention until Eoin Kavanagh’s late brace sealed the win.

Freebooters A also made sure of their place in the final four when they saw off River Rangers 4-0 on the Fair Green. Goals from Andrew Wall, Conor English, David Grincell and Jason Hennessy did the trick for the Blues as they scored a good win.

Elsewhere Clover United took a big step towards securing their Premier Division safety when they beat Fort Rangers 3-0. Paddy Carroll and Ray Bowe had Clover two up inside the first half at Rathdowney, but they didn’t make the points safe until Darragh Carroll added a third after the hour mark.

Bridge United’s A team made sure they ended their season with some spoils when they beat Stoneyford United 2-1 to lift the Division One Billy Leahy Cup. A goal either side of the break from Chris Kavanagh did the job for Bridge, who also ended the campaign with promotion to the Premier Division.

It was a good weekend also for the Freebooters under-17s as they added another title to the club trophy cabinet. A week after the under-19s bagged the Shield the younger Blues did the same, a brace from Mikey Clifford helped them beat Highview Athletic 2-0 and secure the Con Downey Shield.

There was no such joy for the League’s under-12 team, however. They were beaten 2-0 by the DDSL in their inter-league final.

Highview Athletic A 2, Newpark A 3.

Under-14 Bennettsbridge Parts League Division 1A

Under-13 Kilkenny People League Division 1A

Under-12 Glanbia League Division 1A

Under-12 Glanbia League Division 2A